US Elections: A Once in a Life Time Opportunity 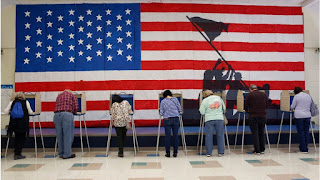 The atmosphere surrounding the USA elections is toxic, to say the least. This is probably largely driven by the truculent, brash personality of the present President who specialises in pushing buttons and saying what you don't want him to say.

Alas it seems the most important factor in the race for the Whitehouse is having the money to throw at the campaign and if you have the cash, nothing else matters. It seems throughout society and across the world the crisis we face is one of leadership.

Whatever you think of Trump & Biden, this election does present Catholics with a clear choice. America has the chance to overturn Roe vs Wade here, make no bones about it. Whatever else is going on, Trump has the brass to facilitate this change. What cannot be argued is that he is the most pro-life President in history, even speaking at the March for Life in January. If America takes a moral stand against abortion, it will be an incredible witness to the rest of the world.

This is possible because, right now, Senate Republicans have begun hearings to confirm Amy Coney Barrett as a supreme court justice. If confirmed as expected, Barrett would become the third justice on the court to be appointed by Donald Trump. The significance is hard to overstate. Barrett represents the culmination of a decades-long project by conservatives to control the high court. Her confirmation would extend the conservative reach into every corner of American life and would give conservatives a bulletproof, six-justice majority on the nine-member court, which decides cases by a simple majority.

The real scandal for me is that given such a stark and clear choice, the corrupt US Bishops are supporting Biden. Well, of course they are!

Much of the argument against Trump I have heard is that he is merely pretending to care about pro-life issues in order to get the pro-life vote. Frankly, who cares? That's a matter for his own conscience. Ultimately we know from long history that God can write straight with crooked implements. If Trump wins such an important battle as the battle over child sacrifice why are we looking a gift horse in the mouth?

The pre-eminence of this issue is clear throughout Catholic teaching. Americans are presented with the clearest choice they have faced in decades - why would you not grasp this opportunity with both hands?

Please check out my website for some great DIY ideas for Christmas & birthday gifts: