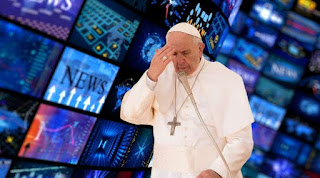 Occasionally, in discussing the unmitigated disaster which is Pope Francis, someone will say to me something like this: "that's just the media, read what he actually says and judge him on that".

The problem with this is I do. I read pretty much all his stuff and pretty much everything is σκύβαλα, as St Paul puts it in Philippians 3:8.

Reading his stuff has made me more upset, not less upset and it makes the people who defend him look utterly ridiculous, because pretty much all of it wouldn't get a "D-" from any high school teacher. It is repetitive, self-referential and verbose.

Why is everything about him as well? Take his recent ECONOMY OF FRANCESCO three day conference on economics. What's that? Never heard of it? Well that's because not a single major secular media reported substantively on the three-day jamboree. This was despite media-savvy presenters like economist Jeffrey Sachs, eco-feminist Vandana Shiva, pantheist ex-priest Leonardo Boff, anti-property-rights political theorist Jennifer Nedelsky and Nobel Peace Prize winner Muhammad Yunus.

Instead, during the Economy of Francesco symposium, media outlets (from left-wing British newspaper The Guardian to the United States' CNN television network) were chasing a story of a lingerie-clad Brazilian model who got a "like" from Pope Francis' Instagram account.

Anyway, here's another example of detritus produced by Francis, brought to my attention by Father David Palmer this morning. The last two popes have call for a "new evangelisation", a call which many lay people my age took to their hearts. Now we have a pope who calls for no evangelisation! 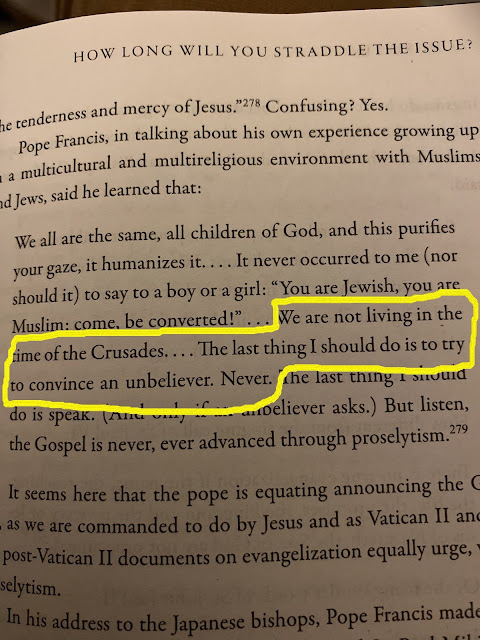 This is where it's from:

Obviously this is a theme we have seen repeated often enough by the pope to say it is one of the key focuses of his pontificate, which is a bit of a worry, given that the reason we are Catholic is because of its truth - which requires proposition and explanation. I was taught that proclamation is one of the distinct and essential properties of our faith. Our unique claim to truth: a truth given to us by the Son of God who came to reveal the Father is what makes us what we are, and the protection and proclamation of this divine message is what the Church exists for.
Perhaps his comments go some way to explaining this bar chart (from p. 15 of this) 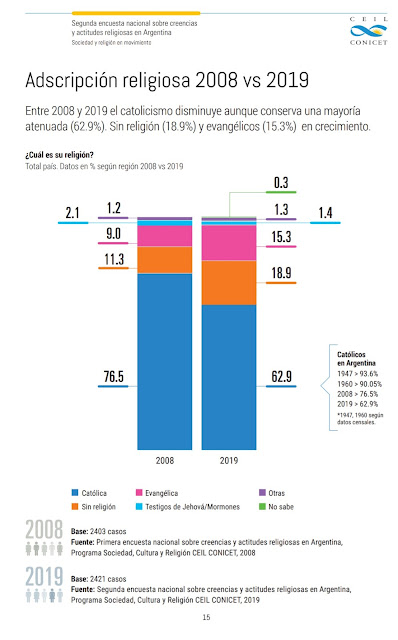 Ultimately I am left bewildered by the choice of this man to be the successor of Peter. The rumours are that there was a lot of canvassing that went on by the St Galen group of cardinals to push Bergoglio forward. I don't know what the truth of any of that is, but if a group of cardinals did want him in position one has to wonder why? It's not for his faith certainly - anyone who has read his regular interviews with Scalfari knows he doesn't actually have any faith, so there must be another reason.

Business acumen? Nope. The recent balance sheet released in the wake of the Beccui financial scandals show a 25 million-euro ($29.36m) drop in donations from dioceses and individuals alike. It also predicts drop in future income which, it predicts, could be anywhere from 39% to 80%. So maybe it's his ability to read people and put them in the right places? Nope. We know he elevates deeply immoral and problematic men to positions of power and casts the faithful, the dedicated, the intelligent away. He ignores pleas from cardinal's who are concerned about his teaching or his policies.

All I can think is that he is someone they thought they could manipulate. It's not turning out very well for anyone.