Eyewatering sums of money transferred from Vatican to Australia 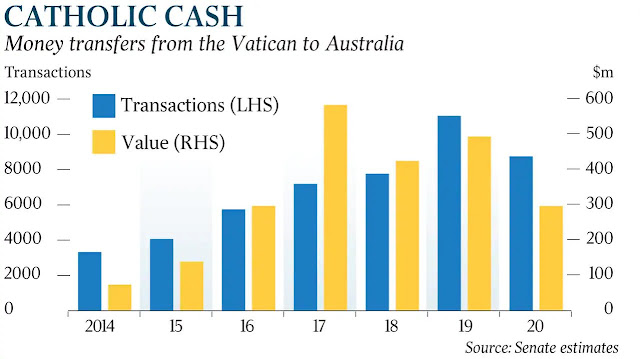 The above graph posted by Edward Pentin shows the value and number of wire transfers from the Vatican to Australia 2014-2020 totalling AUS $2.3 billion (USD $1.7 billion)

The Australian’s Dennis Shanahan reports on a discovery that the Vatican and associated entities - from 2014 - have transferred $2.3 billion to accounts in Australia that don't seem to be connected to either the church or the government. When Shanahan contacted senior church officials about the matter "they hadn't heard about it".
The Australian Federal Police have been investigating the matter after it was discovered large amounts of money were being transferred from the Vatican to Australia around the time Cardinal George Pell was being accused. The amounts doubled every year from 2014, the year Cardinal Pell was appointed Vatican treasurer, reaching a peak in 2017 when Pell returned to Australia to face sexual abuse allegations.
“Most of the time if you speak to senior church figures, they say money goes from countries, from Australia to the Vatican,” he told Sky News host Chris Smith. “When I tried to find where the money went and spoke to senior figures in the Catholic Church yesterday, they hadn’t heard about it.”
On the face of it it looks like the Vatican bank is being used by any number of problematic entities to transfer eye-watering amounts of money around the world. When he was put in charge of Vatican finances, it looks like Pell started closing down these "cipher" accounts and this could be why he was "fitted up" - a payment being sent to Australia to ensure Pell was taken out.

After Pell was falsely convicted, the money increased exponentially and the journalists have been unable to find a Catholic bishop who saw a single penny of this money.

So many people have been saying for so long - for the money! We can see now that there is something deeply diabolical going on here.

The report drew on official documents from Austrac, Australia’s financial crime regulator, that had been shared with the Australian Senate.
The figures also show some funds, about 5% of the total, could have been part of an annual fund for charities. But Austrac has not disclosed any recipients of the funds in Australia, and some Church sources said the transfers may have been Vatican investments in the Australian bond and equities market, The Australian reported.
The Register also asked Vatican spokesman Matteo Bruni on Tuesday about the matter but has yet to receive a reply.
Meanwhile, a fugitive Chinese tycoon, Guo Wengui claimed in a podcast that the Communist Party had been paying the Holy See generously since 2014 because Beijing 'wanted the Vatican to shut up about China's religion policies.' US-based Guo, 52, said in the interview that the Communist country had also spent large sums to muzzle other countries – including Italy and Australia – from voicing concerns.
What would happen if it was found that China wanted Australian Catholic leaders to quieten down about the Gospel and support Communist Chinese ideology in order to advance the Chinese communist agenda? I should imagine this would be considerably cheaper than conventional warfare!
Does that seem like a far-fetched conspiracy theory? Remember Argentinian Cardinal Sorondo, in 2018 said “at this moment, those who best realize the social doctrine of the Church are the Chinese." which was considered bizarre by practically everyone, especially given the plight of the Uigher people, organ harvesting, and consistent destruction of churches.
Australia Cardinal Pell Cathoilic bishops of Australia financial malfeasence