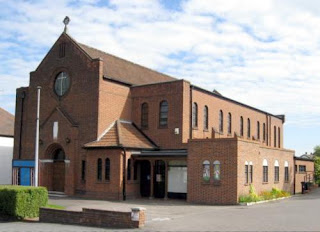 Over the years I have noticed an evolution in the circumstances of our presbyterate which, whether we have heeded it or not, has undoubtedly wrought existential changes in the life of your average priest. Growing up, there were usually  two priests, often three, in a parish. Now priests are largely solitary. As a priest friend of mine remarked a few years ago, this means that it is easy for the good ones to work themselves to death with no one to tell them to take a day off, it's similarly easy for others to descend into darkness, error, alcoholism, etc.

A priest is a father and as such, for most of us who take our faith seriously, he commands a certain degree of paternal respect. He is someone who you go to for advice, for wisdom, for succour when things are so bad you can't cope anymore.

But who does he go to? Do you know your priest well enough to be able to say who his friends are? That he has a hot meal? That his heating works?

I am blessed to have a family, my home life is full of laughter (and some tears) hugs, chatter and meaningful discussion. We sit down together every night at a table with at least five of us, usually six and regularly seven or eight. We discuss work issues, I might propose a work strategy, trying it out on those closest to me, they will proffer advice and counsel. We discuss the older children's degrees, we do homework, we argue about politics, we critique the news, we play board games or card games, we pray together.

There are material needs and there are spiritual needs. A family tells you when you are right and when you are wrong, knocks the rough edges off when you get above yourself, raises you up and encourages you when you feel you can't.

What is the mechanism there for priests?

This has long concerned me. Some priests seem to be very happy, live in beautiful parishes, enjoy their ministry and really thrive while others appear to struggle in all sorts of ways.

Last Sunday I posted a blog about a priest near me who had published some personal ideas in his parish newsletter which plainly contradicted the faith and, indeed, undermine it in ways which have serious repercussions for the flock in his care. A concerned parishioner of that parish forwarded a link to a (kind of) Mass where that priest, Fr Paul Fox, expands and emphasises some of the ideas he wrote in the newsletter.

It is quite shocking. Most of the "Mass" is "homily" where Fr Paul does his best to talk his parishioners out of believing what the Catholic Church teaches about the Four Last Things.

If the heresy of modernism (which Pope Pius X calls the "synthesis of all heresies") is defined as the influence of Protestantism on the explanation of the Catholic faith in an anti-incarnational and anti-institutional way - then Fr. Paul's homily here is an absolute master class!

"What we've been taught is simply not true"

I can't believe what I am hearing here. Given the crisis we are facing as a Church beset on all sides, this is a man who is telling his parishioners the Church has got it wrong and he has figured it out - he's figured out what Jesus really meant and it isn't the "horrible, horrible, horrible, horrible teachings punched into us as children". It makes you wonder what sort of childhood he had! He certainly has some undealt with issues it seems and clearly he has a serious problem with the Catholic Church!

I started writing a point-by-point refutation of Fr. Paul's "homily" here, but I stopped, I don't need to - it's just ghastly and should automatically set alarm bells ringing for anyone who has any decent formation.

Fundamentally - his thesis is based on an obviously false premise - the idea that God exists and is in control of creation - Fr. Paul makes a lot of the redemption of all of creation, the reconciliation of the universe with God. And yet, his argument is that God's plan was a disaster: obviously He knew what would result from His sending His Son to definitively reveal the Godhead to us, but it was an error which Fr. Paul is here to sort out with his anti Church rants!

The idea Fr. Paul pushes here is the theory of apokatastasis (from Origen) which was condemned at the Synod of Constantinople in 543AD - ratified by the Council of Constantinople in 553AD. St. Augustine protests more strongly than any other writer against this theory - an error so contrary to the doctrine of the necessity of grace. See, especially, his "De gestis Pelagii", I in which Augustine alludes to the sentence pronounced against Pelagius by the Council of Diospolis, in 415 (P.L., XLIV, col. 325). He moreover recurs to the subject in many passages of his writings, and in City of God XXI sets himself earnestly to prove the eternity of punishment as against the Origenist error concerning its intrinsically purgatorial character.

Fr. Paul's constant changing of the words of the liturgical books is contrary to canon 846.1 quite apart from the fact he isn't vested.

The whole thing is basically his own uninformed, uneducated opinion. It is theological baby-speak. He talks like someone who has never understood what the Church teaches about the issues he addresses. Total relativism, total subjectivism - one man's own workings, total error, totally uniformed. The only sources he makes mention of are Protestant ones, although I don't know any serious Protestant Christians who would agree with his rather infantile analyses. it seems to pay absolutely no regard whatsoever to the teaching of the Catholic Church! I wonder if he knows his theory was considered, discussed and condemned by the Church in 543 AD? I've never heard anything like it!

St. John Paul II, in Catechesi Tradendae, §30, underlined how important it is to pass on to our people everything that Jesus revealed to us:

"A disciple of Christ has the right to receive "the word of faith" not in mutilated, falsified or diminished form but whole and entire, in all its rigor and vigor...This is why, when a person first becomes aware of "the surpassing worth of knowing Christ Jesus,"...there is no valid pretext for refusing Him any part whatever of that knowledge"

At the beginning of the World Synod of Bishops on the New Evangelisation back in 2012, one of the presiding cardinals began the synod by saying, "Our number one priority as a Church today is to recover our confidence in the truth of the faith" what Fr. Paul is doing in Rayleigh is the precise and direct opposite of that.

I shouldn't be surprised that he omits the creed. He doesn't seem to believe half of it!

I have to wonder what the support mechanisms are for Fr. Paul? Who monitors what he is up to? Who mentors him? Who does he talk things over with? What priests are his friends and who picks him up when he gets it wrong? In 2017 Cardinal Vincent Nichols gave an address as part of the 'Masters in Discernment Course' for newly ordained bishops in Rome. In that address he makes many important points which are focused on the need for bishops to really know and care for the priests they are spiritual fathers to:

the task of the bishop is to get behind and beyond the reputation and come to know the man, and therefore, to let himself be known, too. The pastoral care of priests is not first and foremost a matter of organisation, but a matter of relationships.

If the bishop doesn't know what Fr. Paul teaches, if no one has told him, or if he hasn't any sense of it, he is not doing his job properly. If he does know, why would he allow Fr. Paul to continue attacking the faith of the good people of Rayleigh? Why would he not address his errors and correct his inadequacies? The simple fact of the matter is he contradicts the teaching of the Church as expressed in the Catechism and he should be called to account for it by his Bishop. If he doesn't retract his statements, he should be delated to the Holy See.