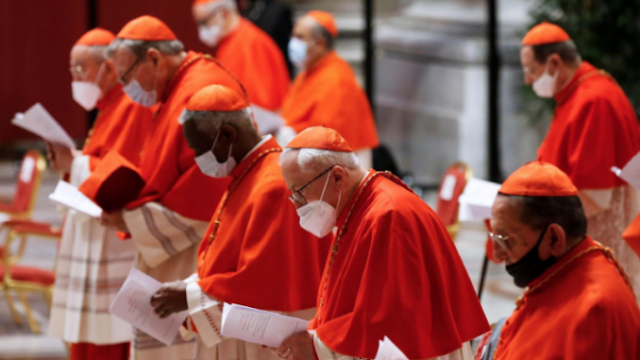 At Catholic World Report, there's an analysis of the recent papal consistory. The article takes a bit of time to get going, but here's the meat:
"The scrapping of automatic cardinalate sees also reduces a process of checks and balances in the Catholic Church. Due to his selective and never-automatic choices of cardinals, it has been easier for Francis to select men (and, consequently, his successor) with similar views. There have been some exceptions, such as Gerhard Ludwig Müller, whom Francis made a cardinal (but later dismissed as Prefect of the Congregation for the Doctrine of the Faith) and who has been in favor of clarifying the confusion regarding Amoris laetitia....
"When we look at the cardinals Francis has bypassed and those he appointed in their place, it becomes clear that many of his selections share his view of the Church. A central theme of the pontificate of Francis, the son of an Italian railway worker who fled Mussolini’s rule for Argentina, has been support for migrants and political refugees. Many of Francis’ cardinals tend to large immigrant flocks: in Cardinal Arborelius’ Sweden, the Church consists mostly immigrants from Eastern Europe and the Middle East, while in Brunei, whose Apostolic Vicar Cornelius Sim was recently made a cardinal, most Catholics are migrants (Sim himself is of Chinese and Malay origin).
"More controversially, many of Francis’ cardinals share his approach to homosexuality. The Catechism of the Catholic Church emphasizes that homosexual inclinations themselves are not sinful (but are 'objectively disordered'), but homosexual acts are (CCC 2357-59). Francis has not disputed this, but some of his words – such as his recent statement on same-sex unions – have created disastrous confusion. In the United States, Francis bypassed Chaput and Gómez, both strong conservatives, whereas Tobin has openly supported the Jesuit James Martin’s controversial book on the Church and homosexuality. An identical process can be observed in Italy: Venice’s Moraglia is strongly conservative, as is Cesare Nosiglia of Turin (another traditional cardinalate see Francis has bypassed), who canceled a retreat for cohabitating homosexuals in his diocese, whereas the pope did give the red hat to Matteo Zuppi of Bologna, who has written the preface to the Italian edition of Martin’s book."
consistory homosexual agenda Pope Francis