Cardinal Grech knew in 2009 priest was accused of molesting children 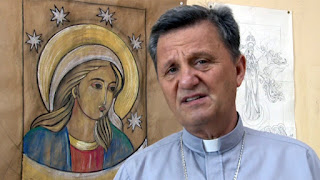 Late in the 1990's, a priest in the diocese of Cairns, Australia was accused of abusing children. The priest fled home to his native Gozo, a small island in the Maltese archipelago. Cairns Bishop James Foley, (who has exhibited public cause for concern previously) told The Cairns Post he had been in email contact with the current Bishop of Gozo, where this man Joseph Sultana is still serving as a priest.

The Times of Malta reports Cairns Bishop James Foley, who offered the victim religious counselling when informed of the abuse in November 2009,

"The current Bishop of Gozo and I have exchanged emails on this matter, initiated by him after this was reported in the media in Malta," Bishop Foley said.

"Now I have no authority or jurisdiction over Joseph Sultana.

"The alleged victim and his solicitors have been urged by myself and our lawyers that this matter should be in police hands, as they are the only ones with the means and the authority to investigate.

"If I make any contact with Joseph Sultana at this stage, that could interfere with any current or future police investigation.

"Hence, I am unable to say or do more at this time."

OK so in 2009, we have a report from Bishop James Foley that he had spoken to (then) Bishop Mario Grech about credible accusations against a priest who had fled Cairns for Gozo.

This priest, Joseph Sultana, was charged yesterday in the Gozo court as the magistrate heard another of Joseph Sultana’s victims say the priest molested him when he was around 8 or 9 years old, which would have been in 2003.

As the highly respected Maltese journalist Manuel Delia reports: "Joseph Sultana left Australia because his conduct appears to have led to at least one suicide and to one separate law suit filed by a victim asking for compensation for the incredible suffering he was served by his abuser.

"And yet for years Joseph Sultana found shelter in Gozo while he groomed at least one more victim in Malta. We know of one victim who spoke up. There could be more."

Delia goes on to ask: "given what the Gozo curia knew about Joseph Sultana, could it and should it have done more to keep him away from altar boys? The evidence suggests that it should have and since in a republic, the ultimate responsibility of protecting the vulnerable – children, first – falls to the state, the state should not stand idly by."

Grech has had questions raised about his character over many years, he has a reputation as a bully and is widely rumoured to be the driving force behind Malta's appalling guidelines on Amoris Laetitia, which seem to have directly led to a red hat for the man in Pope Francis quid pro quo curia.

A man of questionable character with at best a shaky grasp of Catholic theology & doctrine prepared to compromise every principle for the sake of promotion? The perfect recipe for success in the Catholic Church led by Pope Francis!