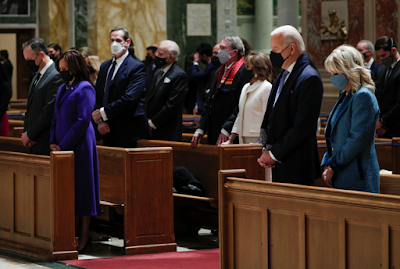 The statement was expected to be released at 9:00 am Jan. 20. The Pillar (a new Catholic news source founded by Canon Laywer Ed Condon and former editor of CNA J.D. Flynn) reported that it was not released Wednesday morning, and bishops were informed by USCCB officials that it remained under embargo, even after one media outlet reported it had been released.
The Pillar reports:

The statement had been debated hotly late into Tuesday evening, but multiple sources say it was the intervention of the Vatican that led to its delay.

Sources close to the USCCB say that several American bishops had raised concerns about the statement’s release, deeming it unduly critical of the incoming administration.

Three sources close to the bishops’ conference said that objections to the statement’s release came from Cardinal Joseph Tobin of Newark and Cardinal Blase Cupich of Chicago, among other unnamed bishops.
Writing in First Things, George Weigel praised Archbishop Gomez' courage, saying:
"Archbishop Gomez is a quiet and gentle person who does not seek the spotlight; he is not an inveterate tweeter; he is not confrontational. More to the point, however, he is a man of deep faith and solid piety, who understood in November that an inflection point had been reached and that the Church’s evangelical credibility was at stake because of that. He offered a profile in episcopal courage at a moment when a few others—the real outliers in this drama—were demanding (one hopes without recognizing the analogy) a reprise of the accommodationist approach to Catholic public officials long championed by Theodore McCarrick, not least during the 2004 election."

"Over the past several months, a consensus has emerged among the American bishops, including virtually the entire episcopal leadership of the USCCB: Maintaining a false façade of episcopal unity is not worth the sacrifice of the truths which the Church must speak. Those include the truth about the Church’s own sacramental integrity and eucharistic coherence; the truths about the inalienable dignity and value of every human life from conception until natural death; the truth about religious freedom in full and the conscience rights of those who refuse to act against human dignity; and the truth about the Church’s concern for the spiritual health of Catholic public officials who, with whatever degree of subjective culpability, nevertheless facilitate grave moral evils."
It seems a lack of belief in core Catholic doctrine is at the heart of the disunity in the USCCB and I dare say it is the same here. As an increasing number of bishops attempt to forward an agenda at odds with things that Catholics would have all agreed on fifty years ago including the ever impending "LGBT" agenda which seems to dominate almost every walk of life today!
It feels as if the majority of US Bishops supported Joe Biden, some pretty much openly endorsed him.
It seemed that the newly installed President was trolling all Catholics when one of his very first actions was to tweet this:

As we mark the 48th anniversary of Roe v. Wade, now is the time to rededicate ourselves to the work ahead. From codifying Roe to eliminating maternal and infant health disparities, our Administration is committed to ensuring everyone has access to the health care they need.

It seems that some who were prepared to argue that Biden would not openly support abortion were shocked by this:

How did you go from supporting the Hyde Amendment & other policies to reduce abortion to this? 🤷‍♂️ (The former isn't ideal but it a whole lot better than your current policy of abortion extremism well beyond what the average American wants.) https://t.co/IOnNsifKob

Can any Catholic now support Biden? Can the bishops keep quiet?
This is an absolutely dreadful take on it which I fear is typical of the Tablet. I quote:
"Among those who responded was Mark Dowd, an award-winning British journalist and author of Queer and Catholic.
He said that “the obsession with abortion continues to alienate millions of Catholics worldwide. Where are these Bishops on Climate Justice, on LGBT values, women and racism??”"

This is such a typical attitude amongst many Catholics today, but it sadly completely misses the point! While these issues may be important (I'm not so sure about LGBT issues, but certainly racism, women's rights, care for our planet, etc are all good things we all want) the Church does not exist to forward these human issues, it exists to preach the Gospel!!

If bishops fail to uphold & teach Catholic doctrine, what does it mean to be Catholic at all?
Phil Lawler sums the situation up well writing in Catholic Culture:
"If our bishops take disciplinary action against politicians who flout Church moral teachings, they will undoubtedly be unpopular. There will be outraged editorials, angry demonstrations outside the chancery, maybe even large contributions withdrawn. But truly courageous bishops—shepherds who cared about the souls of their wayward sheep—would accept those costs. Many lay Catholics who are active in the pro-life movement have already paid the price for their public witness: ridicule, social ostracism, lost career opportunities, even lawsuits and imprisonment.

A few bishops have expressed fears that if they disciplined Catholic politicians for promoting the culture of death, the angry public backlash might cause a net setback for the pro-life movement. Well, how has their soft-sell strategy been working all these years? The duty of Catholic bishops is not to make political calculations. Their duty is to protect the souls of the faithful and the integrity of the faith. Do that, and let the faithful lay Catholics who are active in political life cope with the consequences.

The Catholic Church is not a debating society. And after decades of public debate about abortion, it is extremely unlikely that one more episcopal statement will suddenly turn the political tide. We all know, at this point, what our bishops say about Catholic politicians who promote abortion. What we want to know now is what—if anything—they will do."

I earn my living selling tools and hardware products. Please have a look at my website Scion Supply by clicking here!