Above: Pachamamma.
The bishop of Brentwood Diocese Rt. Rev. Alan Williams recently wrote to all diocesan clergy explaining that “the Catholic Bishops of England, Wales and Scotland are issuing a Pastoral Letter about the role that the Catholic Church and our faith must play in our shared care for God’s gift of creation.”
“...must play...”
No doubt this was written at the bishops Low Week Meeting.
I found its contents really rather disturbing although it does present us with a really good indication of the disastrous state of affairs in the Catholic Church at the moment. Bishop Alan specifically asks that this is made available or read at Pentecost, here it is, nice and early for your delectation: 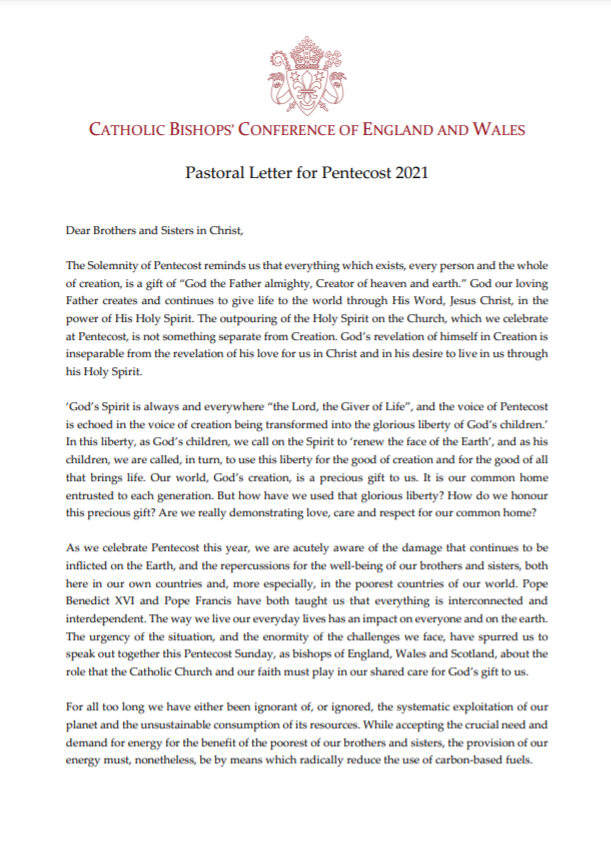 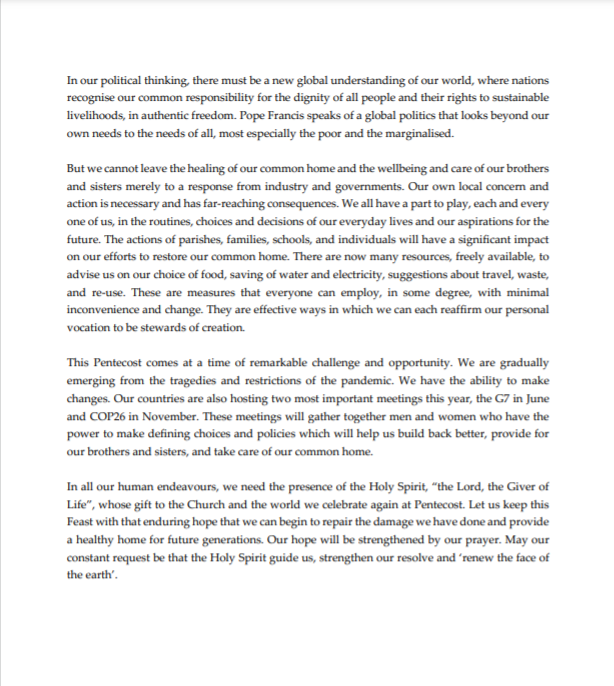 It is accompanied by this awful “novena” which re-enforces the message in the Pastoral letter ad nauseam. 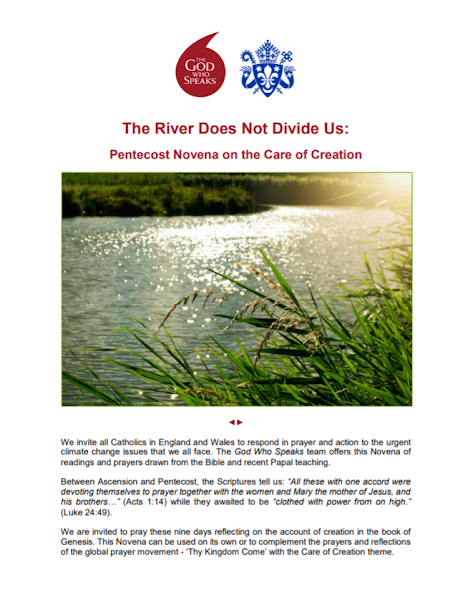 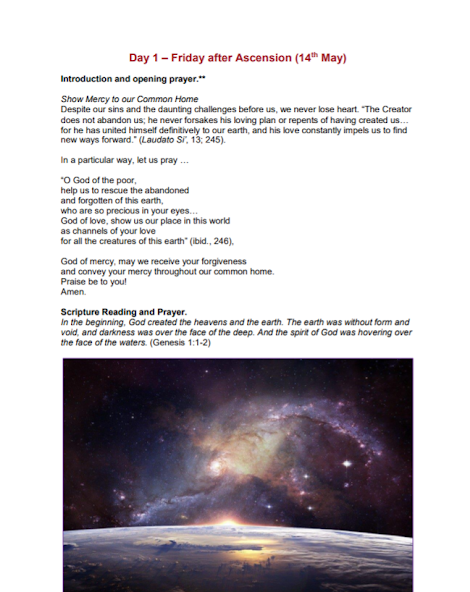 I won’t post any more to spare you.
But what a great shame they didn’t take this opportunity to give some real encouragement to the faithful and to their priests — especially as many elderly priests have been virtually in solitary confinement (as have so many of their parishioners) for much of the last year.
I’m also wondering when the last time the bishops issued a pastoral letter on abortion or were vocal in defence of the unborn?
Considering the actual contents; it is interesting to compare it with Cardinal Newman’s comments about sin and liberalism in religion:
From Certain Difficulties Felt by Anglicans in Catholic Teaching (1850) (Lecture 8)

The Church aims, not at making a show, but at doing a work. She regards this world, and all that is in it, as a mere shadow, as dust and ashes, compared with the value of one single soul. She holds that, unless she can, in her own way, do good to souls, it is no use her doing anything; she holds that it were better for sun and moon to drop from heaven, for the earth to fail, and for all the many millions who are upon it to die of starvation in extremist agony, so far as temporal affliction goes, than that one soul, I will not say, should be lost, but should commit one single venial sin, should tell one wilful untruth, though it harmed no one, or steal one poor farthing without excuse

I rejoice to say, to one great mischief I have from the first opposed myself. For thirty, forty, fifty years I have resisted to the best of my powers the spirit of liberalism in religion. Never did Holy Church need champions against it more sorely than now, when, alas! it is an error overspreading, as a snare, the whole earth; and on this great occasion, when it is natural for one who is in my place to look out upon the world, and upon Holy Church as in it, and upon her future, it will not, I hope, be considered out of place, if I renew the protest against it which I have made so often.

Liberalism in religion is the doctrine that there is no positive truth in religion, but that one creed is as good as another, and this is the teaching which is gaining substance and force daily. It is inconsistent with any recognition of any religion, as true. It teaches that all are to be tolerated, for all are matters of opinion. Revealed religion is not a truth, but a sentiment and a taste; not an objective fact, not miraculous; and it is the right of each individual to make it say just what strikes his fancy. {65} Devotion is not necessarily founded on faith. Men may go to Protestant Churches and to Catholic, may get good from both and belong to neither. They may fraternise together in spiritual thoughts and feelings, without having any views at all of doctrine in common, or seeing the need of them. Since, then, religion is so personal a peculiarity and so private a possession, we must of necessity ignore it in the intercourse of man with man. If a man puts on a new religion every morning, what is that to you? It is as impertinent to think about a man's religion as about his sources of income or his management of his family. Religion is in no sense the bond of society.

Obviously there is a reason for this engagement with the environmental agenda: it is the direction taken by Pope Francis and the fish rots from the head.

But I do find it difficult to understand why so many clergy would follow the Pope down such a blind alley without any qualification.

Of course, I do recognise that it is a very safe initiative. The “boomer” age group who currently fund the bishops and agencies like CAFOD are basically Guardian reading, Pantheistic, ageing hippies and love this “earth mother” direction. It’s so right-on! The fact that this is where the money is is demonstrated by CAFOD’s focus in this area. They spend a great deal of energy identifying what their target audience appreciates and would be willing to support even down to using “Jesus” as opposed to “Christ” when the refer to Our Blessed Lord in their documents. So we can straight away see that this agenda is a vote winner for the bishops, it’s right-on and has no nasty moral dimension to it like gender ideology or abortion, two issues which are right at the front line of the culture war we are supposed to be engaged in.

Let's be clear from the outset; care for the environment is perfectly orthodox and moral. However it is a fact that this issue has many other exponents many of whom are way ahead of the Church in promoting their ideas. Quite frighteningly, it is currently dominated by those who see humanity as a plague which needs to be eradicated. This should be a major cause for concern for anyone wishing to engage with the issue, but even more so for the Catholic Church.

There are quite a few other issues intrinsically linked to this agenda which need careful consideration.

The most important seems to me to be that it moves our understanding of the Church's mission away from the eternal salvation of human beings and seems to make the primary mission caring for the environment, with particular focus on the "human environment", social and economic justice.

The shift of emphasis is unmistakable, and unmistakably Pope Francis, with pantheistic overtones that seek to elevate environmentalism and "Mother Earth" into a quasi-mystical "integral ecological spirituality" (cf. Synod of Bishops, "The Final Document" §81).

When you read all this guff, does it sound like Jesus? Do you recognise the Gospel? To my mind, it reads like the decades of waffle that I have been subjected to by the diocese before I studied Theology and Scripture and worked out how amazing the Catholic faith actually is.

Jesus was completely focused on the salvation of souls, on faith, on repentance, on our eternal destiny, all topics which can hardly be found in any of the writing of the Pope and the Bishops in this area.

Taking this direction leads to a clear impression that this world is much more important than our eternal salvation. It is syncretism, globalism, progressivism.

Do you hear the Gospel of salvation being preached in this Pastoral Letter for Pentecost?

To me, it shocks and frightens me how thin the wall of orthodoxy actually is: those who recognise the importance of listening and discerning God’s revelation to us through His Son Jesus Christ have so quickly been overcome by those who wish to subvert the power and authority of the hierarchical Catholic Church to serve their own ends. Are they so convinced that changing the timeless truths of the Catholic faith and conforming them to the secular modern narrative is what God wants?

It has gone so far now, even the Vatican is using pro-abortion terminology, describing politicians who promote abortion as ‘pro-choice’ for first time in an astounding abdication of moral authority. Until this papacy, I literally thought this was impossible. I am stunned by the speed of change; the appetite for capitulation among those in charge at the Vatican. This can only weaken the message and lead to the subversion of the Vatican as a kind of coercive marketing tool for globalist messages. How far this is from Pope Saint John Paul II’s call for counter culturalism!

In his recent book A Church in Crisis, Dr. Ralph Martin explains in stark terms how the world will never admire us for our apostasy but will only pity us for how long it took for us to do it and congratulate itself on persevering in its pressure until we finally have seen the light. And yet this “light” is  the darkness and blindness that Jesus warned us about.

A focus on improving this world, with its radical de-emphasis on the eternal perspective of sin and salvation, redemption and judgement, death and resurrection, has already been tried, and with catastrophic results! Are we so blind as to want to follow this path again?

My Pentecost prayer is that the Holy Spirit will descend on our cowardly bishops and that they will repent of this and start to preach the Gospel with some fire in their bellies!

“Beware of false prophets, who come to you in sheep’s clothing but inwardly are ravenous wolves. You will know them by their fruits. Are grapes gathered from thorns, or figs from thistles? In the same way, every good tree bears good fruit, but the bad tree bears bad fruit. A good tree cannot bear bad fruit, nor can a bad tree bear good fruit. Every tree that does not bear good fruit is cut down and thrown into the fire. Thus you will know them by their fruits. - Mt 7: 15-20
Catholic Bishop's of England & Wales Pachamamma Pentecost