What on earth is the Pope doing? 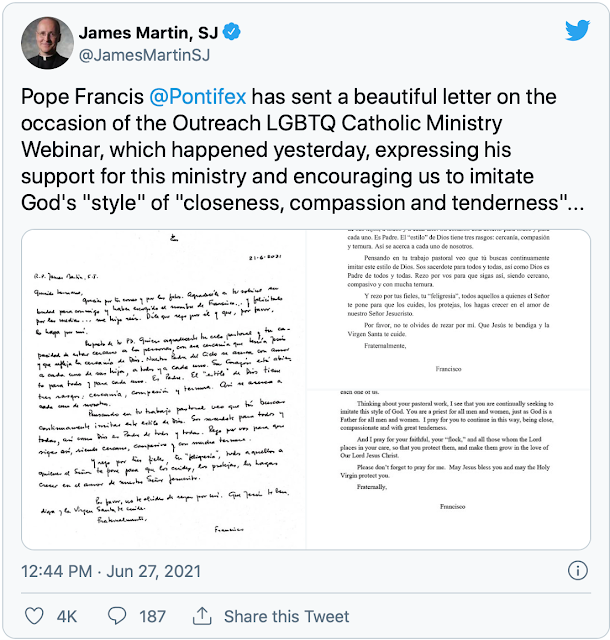 The Pope who has no time to see the Emeritus bishop of Hong Kong,  the Pope who refused to meet with the senior cardinals who presented him with several dubia over his teaching, has lots of time to write a personal letter in support of Fr James Martin SJ’s ministry to LGBTQ+ Catholics, thanking the prominent and frequently controversial Jesuit for his work and encouraging him to continue his efforts.
The very BEST one could say is that Fr. Martin is clearly deeply divisive and controversial. I have posted about him numerous times, the last time just a few days ago.

“I want to thank you for your pastoral zeal and your ability to be close to people,” Pope France wrote in the letter, “with the closeness that Jesus had, and which reflects the closeness of God.”

Hand-written in Spanish, the letter was a reply to one the pope had received from a young relative of Fr Martin ahead of the correspondent’s Confirmation and reminding him of an LGBTQ outreach conference that took place this weekend.

“Thinking about your pastoral work,” Pope Francis wrote to Fr. Martin, “I see that you are continually seeking to imitate this style of God. You are a priest for all, just as God is a Father for all.”

“God’s ‘style’ has three elements: closeness, compassion and tenderness,” Pope Francis wrote. “This is how he comes closer to each one of us,” the Pope continued.
I am really struggling here. None of what the Pope says makes much sense to me. It's like a completely different religion. God "comes closer to each one of us" by "closeness, compassion and tenderness"?? I mean what? Not very cohesive or logical is it? Just like the random ramblings of an old hippy who thinks he is a spiritual guru. To publicly single out Martin for public acclaim like this is very strange indeed.

Fr Martin’s ministry to gay people is and has always been controversial, not just because of its proximity to the so-called “culture wars” and incidence on debates in broad society, but more because Fr Martin likes to troll faithful Catholics, make controversial comments which, if not openly heretical, certainly direct the listener towards rejection of Catholic teaching, and also his habit of completely avoiding more difficult parts of the Church’s moral doctrine.

“I knew that it would be a somewhat controversial topic,” Fr Martin wrote in the Washington Postregarding his 2017 effort, Building a Bridge, “even though I was careful to stay well within the bounds of Church teaching.”
Of course this comes soon after the CDF when asked does the Church have the power to give the blessing to unions of persons of the same sex? The response came back negative.
Fr. Martin didn't like that and led a revolt against the Pope online posting a promise of defiance from banned pro-gay organisation New Ways Ministry which opposes Church teaching & has been condemned by the US Bishops:

"[The laity] are, by reason of the knowledge, competence or outstanding ability which they may enjoy, permitted and sometimes even obliged to express their opinion on those things which concern the good of the Church." "Lumen Gentium," Dogmatic Constitution on the Church (#37) https://t.co/ggA87QjUZO

Fr. Martin was not at all frightened to express his anger and defiance suggesting that the Vatican’s statement will lead to a mass-exodus of Catholics from the Church, and even suggesting that for the Church to stand by its position on same sex unions would be as gravely harmful as the sex abuse scandals of 2002 and 2018. It really seemed things were not going the way he thought they would:

Not since the anger over sex abuse in 2002 and 2018 have I seen so many people so demoralized, and ready to leave the church, as I have this week, after the CDF document on same sex blessings. And not simply LGBT people, but their families and friends, a large part of the church.

There was much speculation at that point that the CDF ruling was strange given Pope Francis' constant signalling in the opposite direction. With this letter to Fr Martin we once agains see the Holy Father back to his old confusing tricks.

I completely understand that the Pope *might* be keen to reach out pastorally to those "on the fringes" in an attempt to demonstrate how no one is excluded in the Church. But is that what he is achieving here? Instead it appears much more like he gives with one hand while taking with the other. He gives false hope that Church teaching on human sexuality will change — because there can be very little doubt that this is what Fr. Martin's ministry is all about —instead of explaining and expounding Church teaching with compassion and in such a way that it demonstrates God's love for all his adopted children. Like this:

Instead of clarity and truth, Pope Francis peddles confusion constantly.

It really upsets me so much. It upsets me because I love my faith, I love Jesus, I love the truth it teaches and I have taken the time to learn it. It upsets me because every single thing he does like this is taken up by a rampaging army of priests and lay people who want things to change in respect of doctrine and anticipate the Pope's words and actions as evidence that this is what is going to happen; or that they can ignore Church teaching and do just whatever they want or think is right "because the pope".

Ultimately, it just seems everyone is let down.

What good does this do anyone?