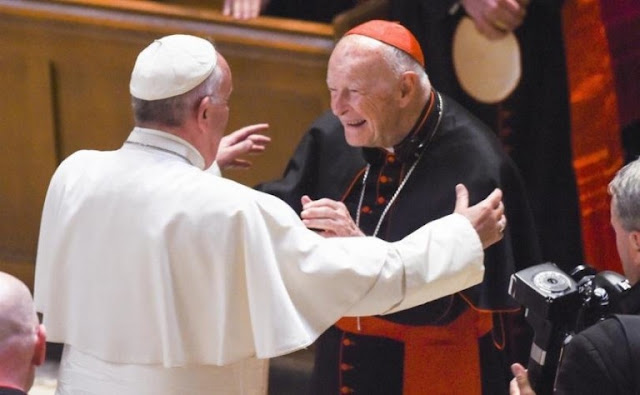 Writing in The Catholic Thing, Stephen P. White makes some great points regarding the recent exposé by The Pillar.

I found his observations on the reaction of both the Vatican & the USCCB particularly interesting:

"The Pillar analysis of mobile app data revealed some very unpleasant things. Rather than simply publishing the findings, The Pillar notified the relevant Church authorities and gave them a reasonable chance to formulate a constructive response, granting additional time when requested.

Either the USCCB or the Secretariat of State (or both) clearly didn’t like what The Pillarhad to tell them. The response was to stall, leak parts of the story to other sympathetic news outlets, and then stonewall. I’ll leave it to communications directors and journalists to argue over whether this maneuvering was brilliant or slimy.

What is clear is that this maneuver was meant to be punitive, to intimidate. This strategy was not to stop the story coming out – word of the story was clearly leaked to other outlets, and Burrill resigned before The Pillar ever reported a word – but to inflict maximum damage on two Catholic reporters who had the impudence to inform Church leaders of something they didn’t want to hear."

Increasingly it feels that we are in some kind of war where the bishops and the laity peer suspiciously at each other over our respective ramparts. As I mentioned in my last blog, bishops lack accountability in a quite frightening way. The things the Church & the Gospel are against: greed, corruption, sexual immorality, abuse are all pretty openly in evidence at the highest levels of the Church. Those clerics who stand against the corruption are pariahs. Their concerns simply ignored by the present Pontiff.

When concerns are brought to the proper authorities, they are ignored, a curtain quietly drawn over the problem in the hope that, hidden from view, the little people will forget.

This attitude is familiar to me; I've seen it lots of times in business and in organisations I have volunteered for or been asked to help out in. It's nasty and it speaks to a few people seeking to subvert the mission of an organisation for their own gain or ends.

And what's really interesting is that as far as the Church is concerned, not just in one place (i.e. Rome), it appears the epidemic is evident in most places throughout the world to greater or lesser degrees.

Taylor Marshall makes some pertinent observations in his latest video about this highlighting the double standards at play: Mgsr Burrill quietly steps down from his key role in the US Church without any sanction, McCarrick's rehabilitated by Pope Francis despite his knowing that the ex-cardinal was an abuser who had been sanctioned by Pope Benedict XVI: a fact celebrated in the progressive media as I reported here (with links to the relevant article). Fr. James Martin is welcomed by The Pope & numerous prominent bishops to push his agenda:

I'm grateful for the support of @CardinalBCupich of Chicago and Archbishop Wilton Gregory of Atlanta @archatl in the ministry of building bridges: "Bishops' Support Grows for Fr. James Martin and "Building a Bridge" https://t.co/KqiBWimypC pic.twitter.com/4rzGEk44s1

Many priests ignore the counter-cultural message of the Gospel and choose to spend all their efforts promoting a synthesis between the Gospel and progressive secular culture. They are applauded by a few vocal lay people with their own agenda, meanwhile the Churches empty. If the Church is preaching the same message of tolerance, acceptance, sexual ambivalence and equality as secular society, why go to Church at all? As someone who has stopped going to Mass said to me last weekend "I only went for the community aspect".

The Pope along with progressive pastors like Martin are determined to focus all their efforts on projects which are uncomfortable for Catholics faithful to the Magisterium. Uncomfortable because they seem to be pretty clearly at odds with it. Meanwhile those who are faithful are being loyalty tested, excluded and ostracised by the Pope's new Motu Proprio.

In his article, White observes that episcopal concerns about an "ever-more-poisonous Catholic media fringe" the growth of which correlates inversely with to the bishops’ own lack transparency and credibility, would do well to recognise how it is fed and grows. White concludes:

Restoring episcopal credibility is going to require a level of accountability and transparency which may be painful, even humiliating, at times. And in that regard, independent Catholic journalists like Flynn and Condon are not the Church’s enemy – they’re some of her most important allies.