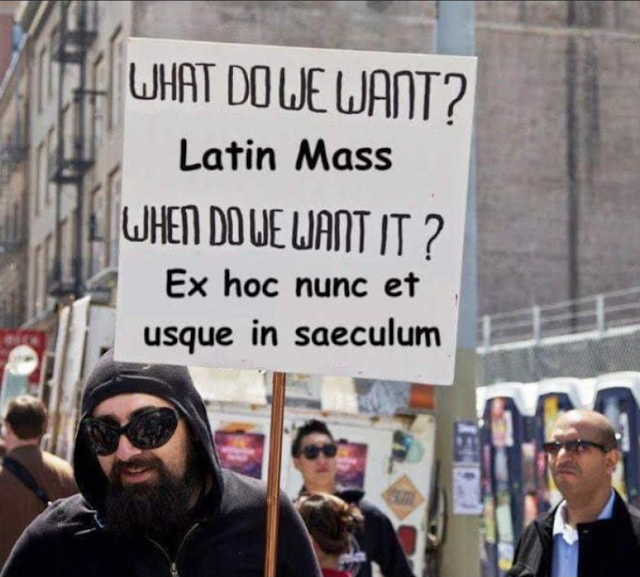 The motu proprio “Traditionis Custodes” was issued by Pope Francis on 16th July 2021, along with an accompanying letter.
This move has been rumoured for months now and was reported to be in its third draft at the beginning of June, but everyone seems to have been taken by surprise at the ferocity of the language in the motu proprio (Latin for "on his own impulse"). It is another embarrassing Pope Francis blunder which damages the office of pope and reveals his petty factionalism and politicalisation of the Papacy. As was posted at NLM:

We must redouble our prayers for Pope Francis, whose whole papacy, every smile, every hug of a disabled person, every exhortation to mercy, will be stained for the rest of history, along with the throne of St Peter itself, by this unprecedented and absolutely gratuitous act of pastoral cruelty, the attempted revocation of Summorum Pontificum.

And what about that title! Is it supposed to be some kind of deeply ironic joke? 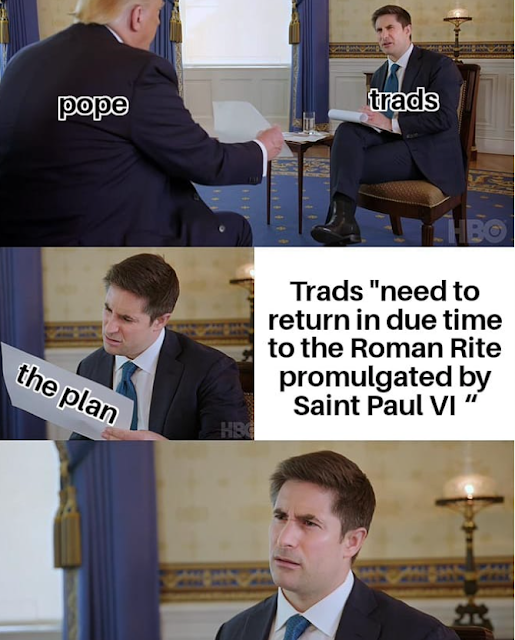 With Catholicism in the west in serious decline, the Vatican mired in financial scandals and abuse scandals, the Church in Germany seemingly on the verge of schism, it is really difficult to see how the Pope considers this a priority.
Pope Francis, who loves to rail against rigid & clericalist types has issued a strikingly rigid & clericalist document, which directly contradicts his long espoused policy of decentralisation.
How can it be acceptable to worship Pachamamma idols in the Vatican while claiming the Mass the Saints of the Reformation died for is a source of division?
The Pope has overseen a deal in China that condones "Mass" where hymns are sung to Mao and Xi, but the old Mass is the real problem.
Pope Francis justifies the measures because of the responses he received to a survey he sent to bishops. In fact, as reported by Diane Montagne, only 30% of bishops responded & 50%+ of these had a “neutral or favorable” response to SP. What emerged was how the TLM has taken root & is loved embraced & bearing fruit.
Also in the accompanying letter to the motu proprio the pope cites «rejection of the Church and her institutions in the name of what they consider the "true Church."» In addition to an «instrumental use of the Missale Romanum of 1962, which is increasingly characterized by a growing rejection not only of the liturgical reform but of the Second Vatican Council, with the unfounded and unsustainable claim that it has betrayed Tradition and the "true Church."»
In response to this, the International Federation Una Voce (FIUV) has responded with sadness:

Both the characterization of Catholics attached to the Traditional Mass, and the harsh new restrictions on it, sadden us greatly. It is our experience, as representatives of groups of the faithful, that what primarily attract people to the spirituality of the Traditional Mass is not the theological or pastoral discussions of the past, but respect for the Sacred, and the sense of the continuity of Tradition, which does not remain as a mere aspiration, but is lived daily in the venerable rite that has developed slowly through centuries and has never been abrogated.

I attend Mass at a Parish where the novus ordo is said. Once a month we have the vetus ordo, the "old rite" at 4pm on a Sunday and my family & I always attend this option. When Summorum Pontificum was promulgated, my Parish Priest instigated this practice and that was my introduction to the Mass my grandparents attended. I loved it and as I got used to attending it I came to feel enfolded in the Church in a new way: with a real sense of history. I found I could attend beautiful liturgies all over the place and did. It opened a new dimension to my faith. It also introduced me to many devout Catholics. I found that where catechising in my own parish was a struggle, Catholics who attended the vetus ordo knew and lived their faith; taught it to their children and lived it within the culture. Facts borne out by recent studies:

My experience is that love of the usus antiquior is driven by a love of Jesus and of His Church & a desire to follow Him ever more closely and to worship Him as fully and as deeply as one possibly can.
Interestingly, when Pope Francis was first elected, I recall the abrogation of Summorum Pontificum being touted as one of the main reasons for his elevation. Why has it taken this long for him to carry out his main goal? Well, perhaps his recent surgery has something to do with it. There is already speculation from pro-Francis media sources like Crux that the Pope is not as well as the Vatican is saying he is. It's not beyond the realms of reason, given he is 85 this December! It's likely he was waiting for the Pope Emeritus to die before he abrogated it, but perhaps time is running out?
As Tim Stanley pointed out in The Spectator, "we all know deep down that this is a desperate last stand by the 1960s generation of clerics, a generation that is about 10 years from losing its grip on power. The seminaries are full of young men who want to say the Old Rite."
My take is that this is a desperately sad move by Pope Francis but certainly does not surprise me. Unity is provided by clear leadership and unity in the Church is provided by closeness to Christ and the truths He revealed to us. Pope Francis is THE Pope of Confusion and ambiguity and if he seeks unity he should start by clarifying all his confusing statements and affirming the settled teaching of the Catholic Church.
If anything I am shocked that all those who continued to show at least tacit support for him while he carried out all manner of evil directives in the name of the Catholic Church (China, promotion of questionable men/ McCarrick proteges to high office, dismantling of the Pontifical Academy for Life, promulgation of dodgy teaching like Amoris Laetitia, etc etc etc) are only now fully furious about this pontificate. Cardinal Mueller said years ago that Francis and the men he has surrounded himself with simply do not understand the office he holds. And the Pope seems completely at ease with the removal of anyone who criticises his direction of travel. So much for mercy and dialogue!

Cardinal Mueller has offered his comments on the motu proprio stating that “Instead of appreciating the smell of the sheep, the shepherd here hits them hard with his crook.” Sums it up really!