The Pillar Exposes Corruption in Rome — No One Surprised. 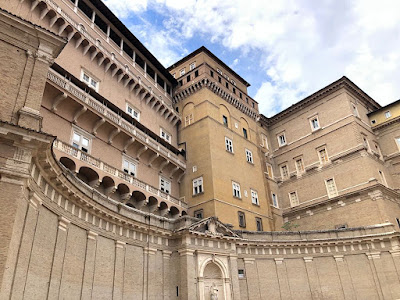 Getting on for a couple of weeks ago now, J.D. Flynn, Editor in Chief & Co-Founder of The Pillar Tweeted that he was in Rome; Borgo Pio is literally the next street to St. Peter's Square.

I’m sure this restaurant has a name, but I find “that place on the borgo with the good norcina” is all anybody needs to know where you are. pic.twitter.com/a60XatgOM9

A matter of a few days later, the news about Mgsr Burrill — former General Secretary of the US Conference of Catholic Bishops — broke.

Today it became a bit clearer what the boys were up to. I think this is the key bit of the report:

The Pillar met for more than 90 minutes with both Cardinal Pietro Parolin, Vatican Secretary of State, along with Dr. Paolo Ruffini, prefect of the Vatican’s dicastery for communications, to present its findings July 17. The meeting’s discussion was agreed by all parties to be mutually confidential, but the fact of the meeting was not itself off-the-record.

After the meeting’s conclusion, Ruffini requested questions from The Pillar, which he said he would submit to Parolin for a response, and asked for a week for the formulation of a response, to which The Pillar agreed.

On July 18, the day after its meeting with Parolin and Ruffini, The Pillar was informed that a meeting with senior USCCB officials scheduled for Monday, July 19, had been cancelled. The Pillar was asked to submit written questions instead. Overnight between Sunday and Monday, one Catholic media outlet reported the possibility of forthcoming media reports on the issue of app signal data.

Late Sunday night, The Pillar submitted written questions to the USCCB at the conference’s request, and was then asked to extend an initial Monday deadline for response until the following day, which it did. On Tuesday, USCCB officials offered to schedule a meeting with The Pillar in the afternoon, to which The Pillar agreed. En route to that meeting, The Pillar learned from media reports that USCCB General Secretary Msgr. Jeffrey Burrill had resigned in response to “impending media reports alleging possible improper behavior.”

On July 23, Ruffini told The Pillar that “we have examined the questions you have posed to His Eminence the Secretary of State following on your meeting of 17 July. At this point, also in the light of what happened in recent days, I can say that no statement will be provided.”
The preceding bit of the article about the danger of Chinese espionage is very interesting because it almost seems like a red herring. It seems glaringly obvious that the notoriously corrupt Vatican Secretariat of State is already compromised by every single State Intelligence Agency with an interest in it. When even Curia prosecutors can't avoid charging Cardinals, you know it's really bad!
Flynn & Condon have received a not insignificant amount of flack for the method of information gathering they have employed in order to create this exposé. I would suggest this is because they do their very best to be fair to all sides in an increasingly polarised Church — polarised because of the words and actions of the Pope.
The real story is clearly the hypocrisy and moral corruption within the Church we all fear exists. It appears to demonstrate that many of those living and working within the highest level of the Church are deeply compromised and at odds with Catholic belief and doctrine, which reveals a degree of cognitive dissonance it is hard to fathom. It might explain the ongoing double-speak and lack of clarity. The reality of this is implicit in the language increasingly used by those in high office in the Church, avoiding admonitions about sin.
It also reveals the same apathetic approach to truth and moral issues that we recognise in the Church at every level. As I express in the title of this blog, no one is going to be surprised that there is corruption in the Vatican. And really that is exactly what the problem is. They're not surprised and they're not embarrassed. Their lives have not been marked by the Gospel.
Unless exposed, they carry on regardless. When exposed, they simply start silent running and hope that the fuss dies down. Why has Mgsr Burrill not been stripped of his faculties?
There are loads of examples here in the UK as well where the hierarchy has promised a full investigation and has then been swept under the carpet. Ex-bishop Kieran Conry's betrayal for example where we were promised a full investigation and heard absolutely nothing further. Another example would be Tim Gardener, the UK priest working in the Catholic Education Service helping to form policy on sex education, but was later tried narrowly escaping gaol (he received an eight-month sentence, suspended for two years, at Southwark Crown Court) for accessing child pornography. Has his work for the CES ever been thoroughly investigated? I would bet good money that the only emotion experienced by those in authority was relief. It should have been concern that this happened and a desire to stop it from happening again.
The Christian faith is about change — changing your life; changing yourself to be more Christ-like. More closely aligned to God's plan for your life as communicated by God Himself over the centuries and most clearly in His Son Jesus Christ. The evidence is, many of those forming strategy & policy at the highest levels of our dioceses and even in Rome are either working against this truth in their every day lives or are happy with a compromise which facilitates continued abuse.
The disgraceful response from people like Fr. James Martin speaks to a deep seated hatred of the fundamental Christian message embedded in doctrine & the Magisterium: a message which has gone completely unheard by such people.
I have no doubt this is part of the long story of redemption which echoes back in history with the prophets calling out to the Lord to restore the Kingdom, justice and integrity. In Acts 1:6 the Apostles ask:

“Lord, is this the time when you will restore the kingdom to Israel?”

“It is not for you to know the times or periods that the Father has set by his own authority..."

We are not in charge. But we can hold those who are to account when they betray us and Our Lord.