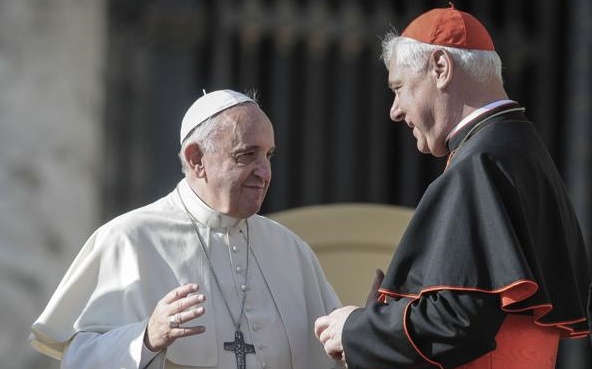 As I mentioned yesterday, the former head of the Congregation for the Doctrine of the Faith Gerhard Cardinal Müller authored an analysis July 19 of Traditionis custodes, Pope Francis’ July 16 motu proprio on the use of the Roman liturgy prior to the reform of 1970. I think it's well worth a deeper look at what he said if only because his erudition and scholarship provide a perfect antidote to the dim-witted person who wrote the flawed motu proprio text. Presumably not even bothering to have it checked by a Canonist...but why would you when you are omniscient!?

As I pointed out in my last post, Pope Francis explained his decision in an accompanying letter to bishops, in which he wrote: “In defense of the unity of the Body of Christ, I am constrained to revoke the faculty granted by my Predecessors.” The pope said he was saddened that the celebration of the extraordinary form was now characterized by a rejection of the Second Vatican Council and its liturgical reforms. This despite, as I pointed out yesterday, very little evidence to back up this assertion.

There are some great quotes in Cardinal Müller's analysis. For example:

“One may measure Pope Francis’ will to return to unity the deplored so-called ‘traditionalists’ … against the degree of his determination to put an end to the innumerable ‘progressivist’ abuses of the liturgy … that are tantamount to blasphemy.”

This has to be the most obvious conflict & inconsistency in the motu proprio. We have all experienced abuses in the Novus ordo Mass, I often post local ones on this blog but they are well documented. In fact, if you attend a novus ordo which, let's face it most of us do, you may well be so used to abuses that you don't even notice them. 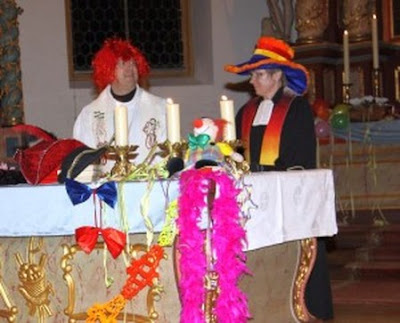 With COVID, more priests have been posting their liturgy on social media. The lack of uniformity and the slap-dash approach to the liturgy is self evident to anyone who looks. Just take the recent debacle in Westminster with Father Dyer-Perry for example who was using the pronoun "she" for God publicly to his flock, was using the old translation of the Roman Missal and who's Mass included numerous innovations like the "Eucharistic Bear". If you want dissent from Vatican II and disdain for the Vatican, no one does this like the secular clergy in my experience. This has been a thing for my whole life. Only after we lost Ruth and moved Parishes to Our Lady of Lourdes & St. Joseph did I feel spiritual fed at Mass. It is novus ordo but said beautifully and reverently. The fact that my Parish Priest says the Mass with such love & devotion is one of the reasons I don't feel the need to "parish-hop" for the vetus ordo.
Unlike Pope Francis, Cardinal Müller does appear to understand this. The Cardinal continues:

"The paganization of the Catholic liturgy – which is in its essence nothing other than the worship of the One and Triune God – through the mythologization of nature, the idolatry of environment and climate, as well as the Pachamama spectacle, were rather counterproductive for the restoration and renewal of a dignified and orthodox liturgy reflective of the fulness of the Catholic faith."

Cardinal Müller rightly emphasises that many teachings of the Second Vatican Council are “being heretically denied in open contradiction to Vatican II by a majority of German bishops and lay functionaries (even if disguised under pastoral phrases).”
“Here we have a threat to the unity of the Church in revealed faith, reminiscent of the size of the Protestant secession from Rome in the sixteenth century,” he said.

“Given the disproportion between the relatively modest response to the massive attacks on the unity of the church in the German ‘Synodal Way’ (as well as in other pseudo-reforms) and the harsh disciplining of the old ritual minority, the image of the misguided fire brigade comes to mind, which – instead of saving the blazing house – instead first saves the small barn next to it.”

The cardinal said that the motu proprio’s “clear intent is to condemn the Extraordinary Form to extinction in the long run.”

“Without the slightest empathy, one ignores the religious feelings of the (often young) participants in the Masses according to the Missal John XXIII (1962). Instead of appreciating the smell of the sheep, the shepherd here hits them hard with his crook,”

I think the cardinal’s focus on unity in the Church, is really valuable given the contents of the motu proprio. Cardinal Müller explains that the Church is “rooted in unity in God through faith, hope, and love” and does not require “sterile uniformity in the external liturgical form, as if the Church were like one of the international hotel chains with their homogenous design.”
Pope Benedict XVI wanted to include the beauty of the ancient liturgy and make it accessible to all: something that was clearly desired. Unity doesn't come from enforcing uniformity, it comes from our common belief expressed in the Creed. If Pope Francis understood this, he wouldn't have declared that God wills a plurality of religion or introduced ambiguous teaching on numerous other issues.

“Pope Francis tries to explain the motives that have caused him, as the bearer of the supreme authority of the Church, to limit the liturgy in the extraordinary form. Beyond the presentation of his subjective reactions, however, a stringent and logically comprehensible theological argumentation would also have been appropriate, for papal authority does not consist in superficially demanding from the faithful mere obedience, i.e., a formal submission of the will, but, much more essentially, in enabling the faithful also to be convinced with consent of the mind.”

The big problem for me is that, like much of the action of this pontificate, this motu proprio just looks like another political reaction: the Pope playing to his electors' game-plan and indulging in point scoring and factionalism. It doesn't appear well thought out or in any way theologically justifiable. Most damaging for the office of the papacy: which is existentially the office of unity, it abrogates an action of a previous pope. This obviously begs the question, what happens if a future pope simply abrogates what Pope Francis has done here? Surely you just end up with the same dangerous polarisation we see in much of the world's politics today?
George Neumayer wrote The Political Pope, researched largely in the Holy Father's home; Argentina. He concludes Jorge Bergoglio is

"a product of political leftism and theological Modernism. His mind has been shaped by all of the post-enlightenment heresies and ideologies from Marx to Freud to Darwin. He is the realization of Cardinal Carlo Martini’s vision of a Modernist Church that conforms to the heresies of the Enlightenment. On almost all intellectual fronts, Francis is a follower of the Modernist school."

Back in 2017 Neumayer was explaining to us how:

"this pontificate is a blatant example of out-of-control clericalism. Pope Francis is using the pulpit of the papacy, not to present the teachings of the Church, but, rather, to promote his personal political agenda."

It is hard to argue with this analysis. The longer this papacy continues the more blatant it becomes. I constantly read complex theological and doctrinal arguments about why the pope can't do what he is doing, but the fact of the matter is only devout Catholics are worried about the rules. The Pope certainly doesn't seem to be worried about them at all. It is so sad to see this reality and increasingly, to see the incredible damage it is doing to our beloved Catholic Church.