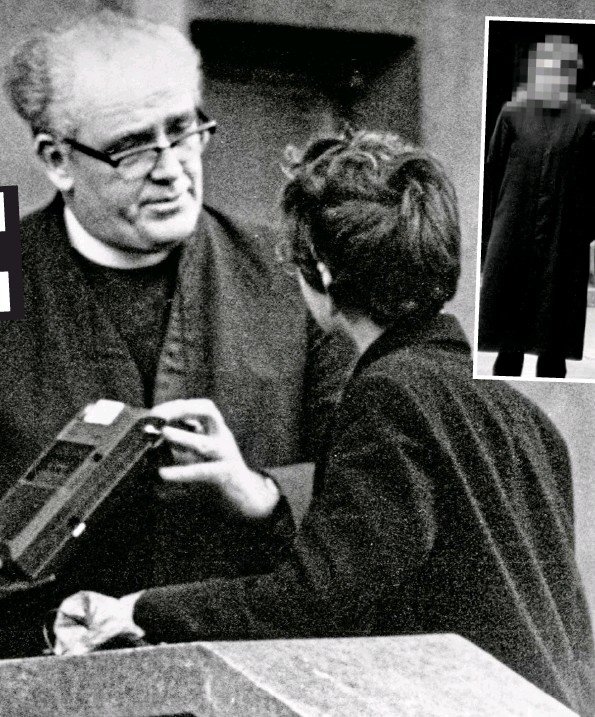 This is the face of a monster.

This is the man who the Jesuit Order in Ireland recently admitted ‘abused boys sexually, emotionally and physically while he was on the teaching staff at Belvedere College in the 1970s’.

His name was Fr Joseph Marmion SJ, ordained in 1957. He was a predatory paedophile and bully, not just of boys, but of fellow Jesuits and lay teachers.

All his victims are now in their 50s and 60s. It's taken that long for the Irish Jesuits to offer some transparency & closure to Marmion's victims.

In the statement the Provincial of the Order, Fr Leonard Moloney SJ, said: ‘In our communications, he made it clear to me that he was concerned for others who may also have suffered and that they should be proactively offered a response and support.

‘This man also conveyed to me that he believed others who were abused may be helped by the recognition that they too were dreadfully harmed.

‘He asked that we name his abuser... publicly and that we make this information widely available in order to reach as many former students as possible.’

"After the statement was issued by the Jesuits, the messages became a deluge. A very welcome one, but containing some heartbreaking accounts of what had happened to them and how it had affected them right up to the present day. One wrote: ‘I am not shaking, I’m in system shutdown... I rejected a super-charming request from him to audition in his room after school for the opera. After that, he had it in for me. I remember a level of hatred that overrode my fear and I can still feel it today. Your article brought back some dark memories.’

Doorley reports one such story from ‘Luke’, told of being ‘measured’, naked, in Marmion’s special room, the long climb up the stairs, the one-bar electric fire, the towels, the racks of old clothes and the sense of isolation.

"...numerous boys have said that they were sexually assaulted during this process. Some were told to place a j-cloth over their genitals, most were ‘helped’ into flesh-coloured tights by Marmion while ‘feeling up your legs and around your bum’, in the words of one.

Several of those who got in touch had more to say about Marmion’s school trips to Vienna for carefully selected students from his German classes. Every August he would take 20 or 25 boys, on his own, for a few weeks in the Austrian capital.

All would be carefully monitored for any signs of illness and their temperature taken — rectally, ‘for accuracy’, as he claimed.

Then his particular targets would be taken to sleep in his room and drugged. Waking up 36 hours later, they had no recollection of what had happened to them.

One survivor, now a doctor, says: ‘I’ve often wondered what he was using. That amount of amnesia would require dangerous drugs, maybe potent benzodiazepines or hexobarbitone that need to be injected.’ We simply don’t know.

Two boys recall being concerned about what had befallen their friend and, when Marmion was out, found the boy groggy and confused in the Jesuit’s bedroom, lying on a camp bed. When Marmion discovered what they had done, he became furious.

‘We all knew about his temper and his violence,’ recalls one witness. ‘But I had never seen him go so berserk. There was saliva flying out of his mouth and he was yelling like crazy. It was like he was possessed.’

A boy who was blessed with a fine voice and musical talent tells me that he knew instinctively to avoid Marmion and to refuse to get involved in his Strauss operettas. ‘But as I went up the school, I knew what he was up to. My recollection is that the younger kids didn’t really discuss it. That came later. And from what I recall, Marmion became more and more brazen over the years. He had got away with so much that, by the Vienna trip of 1977, he must have thought he was unstoppable.’

But he wasn’t. Several boys who had been on that trip spoke to their parents about what had happened. Several boys tell me that one dad, whose son had not been sexually abused, went straight to the rector — effectively the head man within the school and within the Belvedere community — the late Fr Paul Andrews SJ, who was a friend of his.

‘Andrews did absolutely nothing,’ I was told. This parent ‘built up a head of steam and he went to the headmaster, who took it seriously’.

However, the father of another boy, again not sexually abused, a teacher at the school, reported what he had heard to the headmaster. ‘So, it’s not true to say that ‘He became more and more brazen over the years’ none of the teachers did anything about Marmion. My dad tried to,’ he tells me.

With this in mind, let's take a look at the Jesuits’ statement.

‘Following receipt of information from concerned parents in 1977, disclosures of sexual abuse were received by the school,’ it reads. ‘In consequence, a decision was taken that Joseph Marmion be removed from the staff in Belvedere...’ what it doesn't say is that this happened nine months later.

The statement fails to say what was known and when.

Doorley was in contact with two former victims who told him that they had been approached by a Jesuit in 1973 who asked if he knew anything about inappropriate behaviour on the part of Fr Marmion. And he told what he knew. Others, approached in the same way at roughly the same time, denied it out of fear of their abuser.

Reading the Jesuits’ statement, you could be forgiven for thinking that revelations made in September 1977 came as a bolt from the blue. Clearly this was not the case. Some of Marmion’s targets have described this to Doorley as ‘Jesuitical’. One is quoted as saying: ‘They have told the truth. But not the whole truth. I think they owe it to us to make a clean breast of it.’

The relief and, in many cases, a kind of joy experienced by those who survived — and we must remember that there were some who didn’t — when the Jesuits’ statement came out, has given way, for some, to anger.

One told Doorley: ‘That man, whoever he is, who brought this about is a hero. It can’t have been easy. But, for God’s sake, we all knew what that b ****** was up to. And I bet he was at it from the time he first came to the school in 1969. The Jesuits knew too. If I could calm down a bit I’d say they are being economical with the truth. But I won’t, so what I’m going to say now is unprintable...’

One can only say that it’s a real shame that Marmion was never, as far as we are aware, known to the Gardaí.

So we know that the Irish Jesuits received shocking complaints about him in the 1970s, yet he was allowed to continue his activities even allowing him to bring 25 boys each year, on his own, to Austria, where he drugged, raped and abused them. The evidence points to him also being a violent monster as a teacher and practised in the art of humiliating and beating boys. He has the reputation of being a bully in every Jesuit community he served in.

The Jesuit Order placed Fr Marmion on sabbatical leave in Paris at the Jesuit Community of Saint François Xavier for the end of the academic year 1977/1978 after reports from concerned parents in 1977 of sexual abuse at the school.

He was then transferred to the Gardiner Street Jesuit Community. In 1990, the Jesuit Order appointed Fr Marmion as chaplain to St Vincent’s Private Hospital.

The Jesuit Order "recognise that these subsequent appointments should not have been made".
It is only now that all this is finally out in the open the Jesuits and their current slippery provincial, Leonard Maloney, are engaged in a PR exercise to save the cash!
The only way to deal with abusers is to inform the police. Go straight to the police.
Belvedere Fr. Joseph Marmion Irish Jesuits