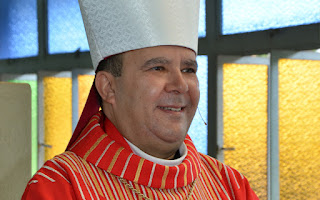 Bishop Tomé Ferreira da Silva had previously been investigated by the Vatican in 2015 for using Diocesan funds to pay his homosexual lover, and again in 2018 for exchanging messages of a sexual nature on WhatsApp with an underage boy. On both occasions the Vatican did nothing.

There has been tension between Bishop Tomé Ferreira da Silva and the conservative and traditionalist priests and laity of the diocese for some time. Of course, in the current climate he was able to use this as a defence during the previous Vatican investigations, however the latest video proved that those priests and laity were right.
Is this what is meant by "zero tolerance"??

The Pillar reports that local media state during a video call with Ferreira the bishop is allegedly engaged in an act of self-gratification. When asked to confirm the video’s authenticity by the newspaper Diario da Regiao, the bishop acknowledged that the images were of him but declined to comment on the alleged content.
It is very interesting, given the nature of objections voiced by large swathes of Catholic media over the recent Grindr revelations, that the bishop appeals to privacy in his defence and attempts to throw blame on those who reported the images (!!!!!!!):

“I want to know how this video came out of my cell phone and into the Diario,” Ferreira told the newspaper. “Who passed it on?” The bishop also initially threatened to make a report to the police over a potential breach of his privacy in regard to the video’s becoming public.

The Pillar notes that the announcement of Ferreira’s resignation comes soon after news that Argentine Bishop Oscar Zanchetta will stand trail in on allegations that he sexually abused seminarians.

Zanchetta has reportedly returned to his native Argentina after leaving his role as assessor at APSA, the Holy See’s sovereign asset manager, in June of this year. Zanchetta served in that position intermittently since it was created for him by Pope Francis in 2017, when he resigned as Bishop of Oran, for what were reported to be “health reasons.”

It subsequently emerged that Zanchetta was the subject of numerous allegations of sexual abuse and harassment, including of seminarians, for which he will now stand trial.

Zanchetta was first accused in 2015, when local clergy complained to the Vatican about sexually explicit images of young men, and of Zanchetta himself, found on the bishops’ mobile phone by a diocesan secretary.

Zanchetta flew to Rome and defended himself to Pope Francis, reportedly saying his phone had been “hacked” and that he was the victim of a plot to discredit him because of his close relationship to Pope Francis. After further allegations were presented via the papal nuncio in 2017, Zanchetta again flew to Rome to meet with the pope, this time presenting his resignation as a diocesan bishop. The pope then created a Vatican role for the bishop.
How on earth do these perverts end up in such prominent positions of power???? Seriously, this bloke should be birched or something.
Bishop Tomé Ferreira da Silva Diocese of São José do Rio Preto homosexual agenda