Church must 'step out of the past' says Archbishop 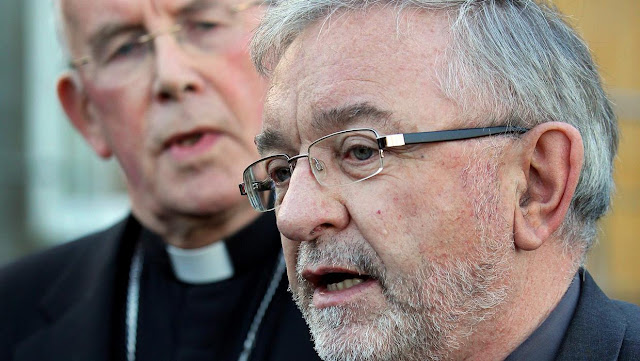 Remember your leaders, those who spoke the word of God to you; consider the outcome of their way of life, and imitate their faith. Jesus Christ is the same yesterday and today and forever. Do not be carried away by all kinds of strange teachings; for it is well for the heart to be strengthened by grace - Hebrews 13:7-9

Archbishop of Cashel and Emly Bishop Kieran O’Reilly has launched a new pastoral plan for his Archdiocese called "Seeds of Hope". O'Reilly stated that the Church must “step out of the past, embrace the present and move to the future”.
OK I think we could all agree we need to do something. The Church has completely ceased to have a role in society and in Ireland it seems to have all but lost any moral authority it may have once had. A 2012 survey of Irish Catholics undertaken by the Association of Catholic Priests found the weekly mass attendance rate to be 35% on an all-island basis, while daily mass attendance was reported at 3%. I doubt things have improved since then, as older people die off, Mass attendance rates in Ireland (already as low as 2 percent in some Dublin parishes) will soon resemble those in even more secular countries. Meanwhile, the Vocations crisis provides a clear reflection of what's going on in the lay community. I mean, Vocations are a disaster in England and Wales, but Ireland's situation almost make the England & Wales look good!
So Archbishop O'Reilly is speaking to an existential crisis. So how exactly is it going to 'Step out of the past'? What is his great plan for renewal?
Well, according to The Tablet's report, the Archbishop's plan foresees a Church of “co-responsibility” between laity and clergy going forward.
I think this strategy can only further damage Vocations. It speaks to a lack of difference between Priest and people and suggests that anyone can carry out the function of a priest.
So what else? The plan which is seen as a blueprint for transitioning the diocese to a new era of inclusivity, lists the inclusion of women in leadership roles as a priority and acknowledges that that minority groups – from divorced or separated people to LGBT+, migrants and the Travelling community – should all have a place and feel they belong to the parish faith community.
It's a bit worrying that any of these people should feel ostracised from the Church, but if they do feel ostracised because they are living in contradiction to Church teaching that's OK. That is a call to repentance and that's what the Church is actually for, so this strategy seems baffling.
The Archbishop also said:

I think this is a good idea, but not if it means abandoning Church teaching. The most engaged and community centred Churches I know are ones were there is a strong adherence to Church teaching.
Judging by the bishop's comments, it seems his plan is that his Archdiocese will step out of the past by abandoning the very elements which make Catholicism stand out from the secular culture. So if Catholicism is the same as secular culture, why bother at all? If it has nothing to say about the culture except that it is all good, what is the Church offering people that is distinctive and worth committing to?
What's noticeably absent from all this is Jesus. It seems deeply incoherent to talk of Catholicism outside of the context of Revelation and the important communication of God's plan for human beings perfectly articulated to the world by His Son. It seems that this approach, which to be fair to Archbishop O'Reilly, does seem very "Pope Francis" resonates with most Catholics who are happily accommodated to the secular world and think the Church too hard. Thinking this is an answer to current problems in the Catholic Church is a very dangerous direction it seems to me.

So then, brothers and sisters, stand firm and hold fast to the traditions that you were taught by us, either by word of mouth or by our letter. - 2 Thess 2:15

As one friend commented about this to me:

It's interesting that never once does it seem to occur to these people in forming their pastoral plans that preaching the Gospel of repentance and salvation in Jesus Christ is what worked in the first place, the second-place, third-place and every other time it has been tried. Instead they offer yet more versions of "I'm alright, you're alright", like some washed up 1970s self-help manual.
And as for the out of the community not in the church, do these people not believe that the liturgy is the source and summit of the Christian life? Why do they so explicitly reject these teachings of the Second Vatican Council!