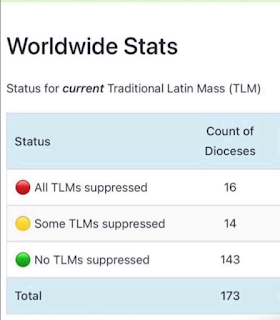 The leaked exchange of letters between Vincent Cardinal Nichols and Archbishop Arthur Roche is very unusual and therefore most interesting. I know various UK clergy who claim they had copies at least a week before they were published, indeed Dr. Joseph Shaw pointed out at 1P5 that:

"These two letters have been going around by email for some time, and it was inevitable that they would be published"

I have heard from Journalists who knew of the existence of these letters, although they were not cleared to go public by their sources, then Gloria TV get hold of the exclusive!

Gloria TV! Why not give it to Damian Thompson or The Tablet or The Pillar? Unless you wanted to create distance?

Can you remember the last time some private correspondence between the Cardinal Archbishop of Westminster and the Vatican was made public?

So who leaked it? Does it demonstrate a growing exasperation with the direction of the Bergoglian papacy? Was it some Vatican or CDW official sympathetic to the Traditional Latin Mass who felt the correspondence had to be made public?

Or was it the Cardinal Archbishop of Westminster himself?

Look at the image at the top of this post. It shows that the justification for Pope Francis Motu Proprio Traditiones Custodes, was a lie. In the text of the Motu Proprio the Pope claimed that:

the Congregation for the Doctrine of the Faith carried out a detailed consultation of the bishops in 2020. The results have been carefully considered in the light of experience that has matured during these years.

At this time, having considered the wishes expressed by the episcopate and having heard the opinion of the Congregation for the Doctrine of the Faith, I now desire, with this Apostolic Letter, to press on ever more in the constant search for ecclesial communion.

If 143 Dioceses have just said "carry on lads" can there be any doubt that the figures from the “survey” have been manipulated to start a liturgical war the object of which is to completely suppress the TLM?
And for what? Because there was an unexpected growth in the popularity of the old rite? If that is true then surely the Church should be listening to the promptings of the Holy Spirit rather than attempting to stamp the fruit out?
When Rome talked about the battle between the two rites — even Cardinal Nichols, well known to not be a supporter of the Traditional Latin Mass — said publicly that he didn’t recognise that situation in his Diocese. And there are LOTS of EF Masses being offered in Westminster.
There have been suggestions that the Cardinal was feeding Archbishop Roche softball questions to Roche trying to tease him out. The letters well and truly show Roche to be broadly ignorant about the topic he is legislating in such a draconian way. He openly contradicts Pope Benedict XVI by claiming that Paul VI “abrogated” the Roman Rite which is “at variance with Conciliar reform,” and encourages “an ecclesiology that is not part of the Church's Magisterium.” — as I explained in more detail in my previous post on the subject. They also show extreme clericalism that the canonical interpretation of TC presented by The Latin Mass Society – which is run by laypeople – “has no standing whatsoever and should not be published as an authorative commentary”- because “the bishops alone” [who were disempowered & undermined in an extreme way by Pope Francis] oversee the liturgy.
Roche was "promoted" to Rome to get rid of him. He had bankrupted the diocese of Leeds and John Wilson (now Archbishop of Southwark) was sent there as administrator to sort the mess out. Roche had been mentioned as a possible successor to Cardinal Murphy-O'Connor as Archbishop of Westminster, he was even said to be the Cardinal's favoured candidate. But after his disastrous tenure in Leeds, he was sent to Rome in 2012 in a "promote to remove" action not uncommon among the hierarchy (somewhat bizarrely).
Roche seemed a perfect fit with Pope Francis and slowly attained greater status rising from the lowly rank of secretary where he maintained the low profile typical of his curial rank, signing statements and doing press relations in tandem with the prefect of the CDW. In 2016 he explained Pope Francis' decision to allow the Holy Thursday footwashing ceremony to include women. He described it as a return to practices before Pope Pius XII reorganized Holy Week services in 1955. He contradicted press reports that Cardinal Sarah was at odds with the pope on this change. He said, "I'm not aware of that, and I'm [Sarah's] closest collaborator."

Pope Francis asked him in December 2016 to chair an informal commission to determine who should have responsibility for translating liturgical texts into the vernacular. In September 2017, when Francis released his document Magnum principium giving national bishops' conferences the dominant role and constraining the authority of the CDW, Roche alone authored the CDW's accompanying commentary.

On 27 May 2021, Pope Francis named him Prefect of the CDW. With this appointment Roche became the highest-ranking English cleric in the Vatican. Given how he was sent to Rome, is it conceivable that there's not much love lost between Cardinal Nichols and Archbishop Roche?
A number of sources have confirmed that the exchange of letters was sent to all the bishops, ostensibly to show what was expected with maximum authority. The letters may perhaps have been composed with this in mind. But that meant a leak was inevitable.
The word is — and this would appear to be backed up by the statistics noted at the top of this post — the bishops are not happy that Rome reignited liturgy wars.
I am no liturgist and as a young man had no understanding of how important the liturgy is to many and, especially, our priests. My love of good liturgy has grown as my faith has grown and, exposed to good liturgy, I recognise the essential role it has in forming us all and especially our children. Not as a form of entertainment (the mistake I think my generation experienced) but as WORSHIP.
Perhaps the vital importance of liturgy for Catholics is best demonstrated by the reaction to Traditiones Custodes. This beautiful and erudite appeal to Pope Francis by a Dominican theologian for example.
Summorum Pontificum brought peace: those who wanted to worship using the Usus Antiquior were free to do so. Those who wanted to use the Novus Ordo were unhindered as always. The Pope and Roche have brought back a false dichotomy between Catholics which Pope Benedict had resolved and they've done it through clear Machiavellian manipulation.
It could be that we have just witnessed Cardinal Nichols standing up for the Church.

Have the "liturgy wars" returned to the Catholic Church? @ArchCordileone weighs in on this week's @WorldOverLive @EWTN "Now I’m afraid these liturgy wars will come back. We cannot allow that to happen. That is what causes division." pic.twitter.com/DSACq3QFxt 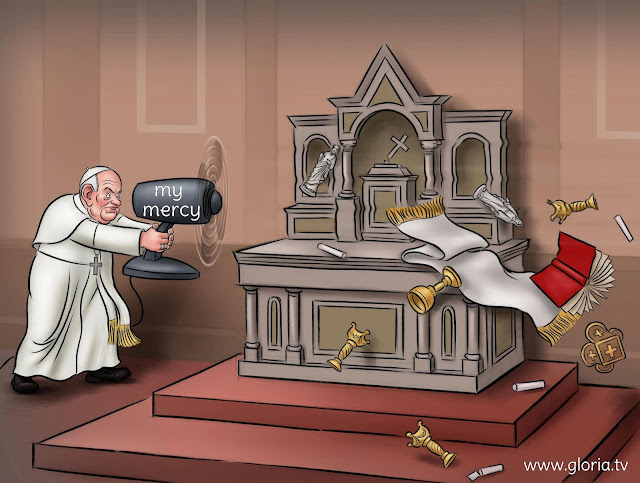