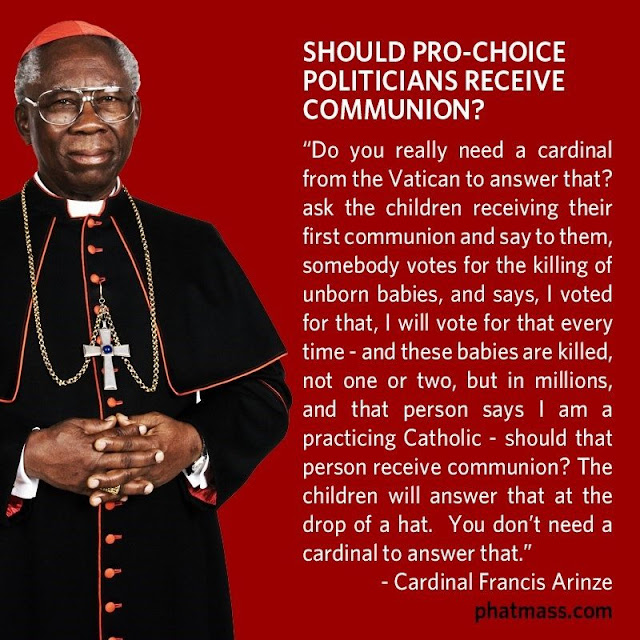 We are used to a lack of plain speaking & clear direction from our shepherds these days, deeply unfortunate though that truth may be.

I am disappointed that the US bishops have failed to clearly state Catholic teaching on the Eucharist but not at all surprised. It was completely to be expected, but it is a desperately sad and it is really difficult to see:

1. How this is not directly contravening canon 915.

2. How this can do anything but diminish belief in the Real Presence

3. How this will do anything but serve to increase division & deep cynicism about the faithfulness of US bishops

Of course, the document tries to cover up for the reality that it frames by coating the essential ruling in lots of meaningless platitudes, but ultimately we all know what this was about. It wasn't about producing a teaching document on the blessed sacrament, it was prompted by, and a response to, the US President & Speaker of the House using their "faithful Catholic" credentials to garner votes while supporting & promoting principles fundamentally at odds with basic Catholic teaching. The US bishops have just said that is OK.

A sad day for the Catholic faith because, in many ways, this ruling is saying it doesn't matter what the Church teaches, you can live at odds with that teaching. It says the principle of metanoia: conversion, at the heart of Christian belief is dead in these men's hearts and lives. And it is hard to see how that death isn't brought about by their constant endorsement of sin; the endemic homosexual culture they move within; the constant compromises they make with Satan in order to hold onto the earthly power they have been so graciously gifted.

Of course this was totally signalled by Pope Francis and we know that Rome has intervened in this process. I have no doubt that the pope will look at this synod of bishops and see it as a success. I think it is highly likely that the creation of near consensus from conflict during this process will be seen by Pope Francis as a sign its' synodality was genuine and blessed by the Holy Spirit. Especially when contrasted with the Der Synodale Weg in Germany. The US Bishops got a letter from Rome, listened to it, and the Holy Spirit granted unity. The German Bishops got a letter from the Pope, ignored it, and the Holy Spirit abandoned their Synod to division.
As The Pillar points out the document includes a clear “Eucharistic coherence” quote from a 2006 USCCB document — saying that “those who obstinately persist in manifest grave sin are not to be admitted to Holy Communion” — the issue of Eucharistic coherence was covered — meaning a win for those who wanted a strong text on “Eucharistic coherence.”

But, of course, the quote is nowhere near as strong, or direct, as the Latin American “Aparecida Document,” which many bishops said they wanted their document to reference.
While I have no doubt the avoidance any vitriolic debate and division of the kind evidenced earlier in the year in the conference will be seen as a really positive thing by the bishops at least, the existential result of the decision seems harder to avoid than the debate they have so carefully avoided: Catholics will see the bishops as unable to address the key issues where life meets faith in any meaningful, effective way.
As the very vocation of the laity is to go out into Satan's domain, the world of commerce and industry, and be a light for Christ (see Lumen Gentium §36) one has to wonder what use to the laity bishops are at all if they cannot even serve this basic purpose?