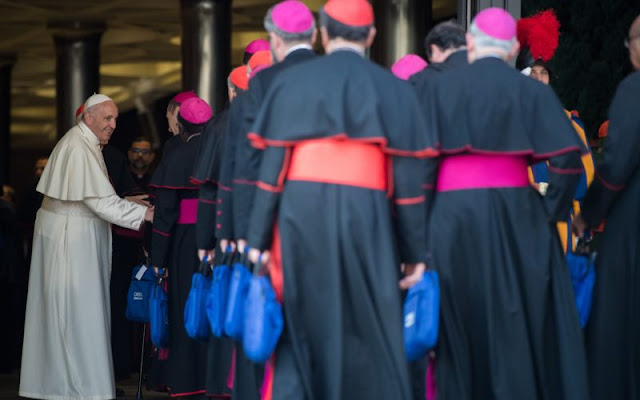 So the Youth Synod is finally over (thank God). It is already widely being dubbed "The Smuggler Synod"


The smuggling began in the Synod’s preparatory phase. A “pre-Synod” meeting of young people in March 2018 was thoroughly rigged, according to the accounts of some brave souls who were there because the Synod managers either misidentified them or wanted them as cover. Working sessions were conducted long into the night, the goal being to get inserted into the meeting’s final document a number of progressive Catholic approaches to human sexuality. One discussion group leader banned an opening prayer before the group’s meetings – what had been proposed was a joint recitation of the Lord’s Prayer, the Hail Mary, and the Doxology – saying that this might make the non-Catholics present uncomfortable. The Synod managers and the new Dicastery for Laity, Family, and Life trumpeted this meeting as a great advance in “listening;” it was an exercise in manipulation and spin.

Informed source close to #Synod2018: "The German synod fathers got all their points through — it’s winner takes all for them. They say it's a 'revolution of listening' but it's really a revolution." pic.twitter.com/hh6abPc4fO
— Edward Pentin (@EdwardPentin) October 27, 2018

Despite all this, Catholics do get it. If anything, more and more Catholics are getting it. Catholics get it because they are driven by a relationship with Jesus Christ and their motivation is to cleave ever more closely to Him.

Brian gets it! (see video below).

The Cardinals and bishops at the Synod DO NOT GET IT.

What we have seen has been really disappointing. An abandonment of the path of faith and reason and a shameless descent into sentimentalism and politicking.

Pro-Francis Cardinals have literally deified Francis, calling him the successor of Christ. Other Cardinals timidly question the validity of the changes he is making and the reasoning behind the synod's topicality, material and purpose.

This is the spirit of antichrist

Meanwhile, the mainstream media is reporting Francis' persistent attacks on Archbishop Vigano from the pulpit as him rallying the faithful to launch attacks on those who ask genuine questions about the Church's accountability in cases of abuse: not a good look!

When you pander to young people it provokes a reaction of cynicism. The synod is the Church hiding behind a facade of relatability. How this ended up was in a failed attempt to project young people's characteristics back at them - how is that possibly attractive to young people? Simply trying to be relevant by joining in with what young people are doing and saying. Any parent will tell you this strategy NEVER works.
When you pander to someone in this way, you demean them. Anyone with a shred of authenticity will simply write this off as a cynical ploy.