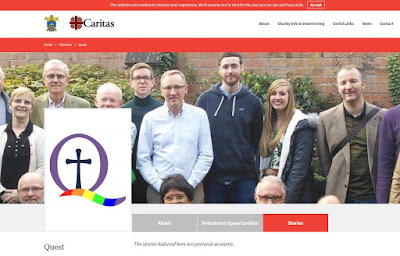 This weekend in my own diocese of Brentwood we saw the launch of a new initiative:

I actually read the bidding prayers at Mass which prayed for the success of this initiative and when I got home, I thought I would have a look. I was flabbergasted (frankly) to find this page promoting the organisation Quest which Cardinal Hume banned from the Catholic Directory of the Church in England and Wales because he concluded it was not a Catholic organisation as it stated that its objectives were to change Church teaching.

Quest have a long history of lobbying and dissent which you can get a sense for at Protect the Pope. Quest openly and publicly support same-sex marriage in direct contradiction to Church teaching.

Despite the danger posed to same-sex attracted Catholics by Quest, Cardinal Nichols actually endorsed them in a letter to Westminster clergy! No doubt this move will be cited to somehow legitimise this scandal, although it is quite possible Cardinal Nichols is unaware of the status of Quest and the group has not been endorsed by the Catholic Bishops of England and Wales.

By publicly printing this on our diocesan website we are giving the impression that this is the teaching of Brentwood Diocese in direct contravention to the teaching of the Church for 2,000 years!

The page contains stories which are "personal accounts" from "gay" Catholics. Under the sub-heading The beauty of being Catholic and gay, one account states:


I believe that having a loving, committed same-sex relationship, which includes sexual intimacy as an expression of that love, is in complete concordance with being Catholic, and in complete agreement with my conscience.

I'm sure the author does believe this, but it is NOT TRUE! It is a lie, and posting it on our diocesan website says that it is a position that is acceptable. IT IS NOT!

Conscience must be informed and a conscience can be blinded by habitual sin, as the Second Vatican Council taught in Gaudium et spes no. 16.

The Catechism of the Catholic Church teaches:

1783 Conscience must be informed and moral judgment enlightened. A well-formed conscience is upright and truthful. It formulates its judgments according to reason, in conformity with the true good willed by the wisdom of the Creator. the education of conscience is indispensable for human beings who are subjected to negative influences and tempted by sin to prefer their own judgment and to reject authoritative teachings.

1785 In the formation of conscience the Word of God is the light for our path, we must assimilate it in faith and prayer and put it into practice. We must also examine our conscience before the Lord's Cross. We are assisted by the gifts of the Holy Spirit, aided by the witness or advice of others and guided by the authoritative teaching of the Church.

The Church expects the same standards of behaviour for all of us and the gift of our sexuality is something which the Church has always taught is confined solely to married persons and ordered towards procreation. This is not limiting, it is empowering!

Catholics do not accept the distorted view of a world which identifies people by their sexuality, we are all made in the image and likeness of God and we have choices. We are not defined by our sexual proclivities or preferences and "love" is not defined by sexual intimacy either - this is a lie! It is only in the complete gift of ourselves through marriage that we can truly be open to each other & God in the work of procreation. Sterile sexual acts are always a use of the other person for the ends of gratification.

A look at the contact information for this initiative gives the phone number for Abbottswick, which was the diocesan house of prayer until recently when it was taken over by Fr Dominic Howarth and our Diocesan Youth team. So it appears that Abbottswick is now being used to promote Quest? 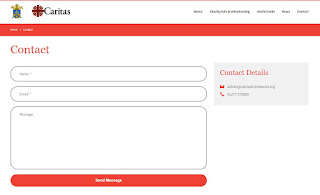 Fr Dominic is in charge of formation for our diocese, he heads a Catechist's formation programme and the Brentwood Catholic Youth Service, yet here he is openly promoting a position which directly contradicts Catholic teaching from a group which has been banned from the listings of Catholic organisations.

Fr Dominic was the preacher at a "Gay" Mass at Brentwood Cathedral, he has also preached openly about LGBT themes to the children of our diocese on numerous occasions, including this Centenary Mass at Lourdes (See 6:16 onwards) where he preached that Elizabeth was shunned just as LGBT people are shunned (talking about shoehorning your agenda in anywhere!). I am no Hercule Poirot, but could Fr Dominic's agenda be any clearer?? If so, is it the agenda highlighted in this recent study?

Do all the Brentwood priests agree with Fr Dominic's contradictory position as openly promoted on this website? Is there any room in Brentwood for Catholics who believe in what the Catholic Church actually teaches?

Can Catholics trust their children to someone who seems so determined to either confuse them regarding the legitimacy of same-sex attraction or is embroiled in a campaign to change what the Church has always taught?