The Revelations of Covington

I can't really recall ever seeing a "Twitter Storm" as violent or swift as the one I saw form around a group of high school boys from Covington Catholic High School at the end of the March for Life in Washington DC last week. Almost everyone on my social media timeline was posting about it. I think its importance can't be over-estimated and reveals quite a lot about the present situation in the Church.

This video tells the story of what happened:


Fr James Martin, Fr Edward Beck & Fr Dan Horan were three Catholic priests who rushed in to judge the Covington boys condemning them unequivocally. Fr Horan, who, like Fr Martin is a prominent advocate for homosexuality, even used the incident to attack the March for Life itself, which he described as "repulsive and futile". This link between anti-life and homosexuality is particularly obvious (there's another really good example of that here which shows how self-defeating this position is for Catholics).

For Fr Beck, the main focus of criticism seemed to be about the boys wearing hats with the logo MAGA (Make America Great Again), which seemed a long way from the actual issue at hand.

Indeed Bishop John Stowe of Lexington went further almost hijacking the whole issue in order to use it to attack President Trump.

As if that wasn't enough, the boys bishop couldn't get on Twitter quick enough to through them under the bus: 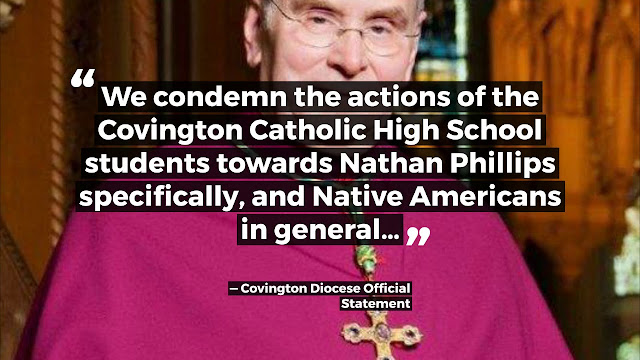 Ask yourself, when was the last time you saw a bishop so quick to defend life or Catholic teaching? I bet your answer is the same as mine, NEVER! He didn't rush to speak to his spiritual sons and find out what actually happened, to strengthen and mentor them, to correct them if the where in error, he just attacked.

As Brian Holdsworth says to the bishop and these so-called priests:

"Any clergyman who piled on to the escalating outrage instead of placing yourself in front of those kids and the very real threat that was at their door, I'm sorry but you've disgraced your office and your vows"

But this is only what we have come to expect from bishops in these days. When, a few days later the prominent "Catholic" New York Governor Andrew Cuomo signed into law the Reproductive Health Act (RHA) Cardinal Dolan refused to excommunicate him. RHA which legalises abortion throughout all nine months of pregnancy & removes the requirement that abortionists be licensed doctors, allowing nurse practitioners and physician assistants to perform abortions as well as removing protections for babies born alive after botched procedures, essentially gives a green-light to infanticide for newborn survivors of abortion. So facilitating the mass-murder of millions of innocents doesn't warrant a response from the US hierarchy, but if you wear a MAGA hat, your feet won't touch the floor! What an absolute joke!

What is clear is that the Covington boys became surrogates for people who are recognised by their support and promotion of issues like abortion and homosexuality in a way which is fundamentally anti-Catholic. Objectively, this is a form of bigotry and religious intolerance as well as a mis-use of high-school students to make a political point.

But it is something we see increasingly in the Church. We see it pushed from a social justice angle, and it is typical that advocates promote homosexuality and denigrate or ignore pro-life arguments. This is clear in my own diocese as well as I recently pointed out.

In my own diocese, as elsewhere, this clear attempt to undermine the Catholic faith is labelled "inclusion".

Brian Holdsworth talks about what he terms as the tyranny of inclusion in the video below.

His point is that a system which imposes the values of a minority on the majority is tyrannical. This is definitely my experience in a microcosmic level in my diocese, and on a macrocosmic level with Pope Francis et al and Amoris Laetitia, etc. There is no way to reconcile this with the clear and consistent teaching of the Catholic Church, but that doesn't seem to matter. No explanation is given beyond false "inclusion". If you stand against it or point out it is problematic you are labelled and condemned without trial as being "angry", "bitter" or similar (these are things I have been called by a priest in my diocese).

The argument that Catholics should compromise their beliefs and traditions in order to welcome those who do not agree or believe what they believe is the direction of travel. It can only be born of an assumption that what the secular world holds and teaches is superior to what the Church holds and teaches. How can an ordained priest hold such a position and not undermine his own integrity and preaching? If a non-Catholic rejects Catholic belief and practice, this does not follow that the community should conform itself to you, rather you are asking for a personal, subjective primacy which is reminiscent of tyranny!

What’s key here is the faith. If we have to compromise the faith, we have nothing left, it is self-defeating and false inclusivity.

How do Catholics reconcile this? It is tantamount to asking them NOT to be faithful. That is what priests like this are doing. The results are all around us. A lack of justice, different teaching from different priests without recourse to the Magisterium, the flock are scattered and confused. The priests in question seek "celebrity", surround themselves with affirming admirers who know no better and revel in their fame. And no one seems to be able to do anything about it.

One thing I promise is that while this goes on, while we fail to have clarity and consistency, we will fail in our mission to be salt and light to the world.