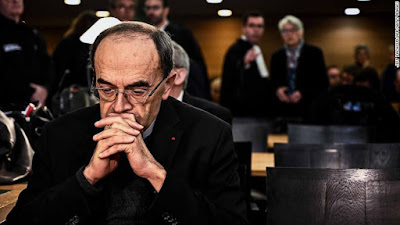 Back in October I drew attention to reports that a French court has ordered Cardinal Philippe Barbarin, the Archbishop of Lyon, to be tried early next year for “failing to denounce a sexually abusive priest”. The report states that the trial, already delayed twice, will now move forward on 7-9th of January despite the Vatican’s “failure to respond to a summons issued to Cardinal Ladaria".

Cardinal Luis Ladaria Ferrer was appointed prefect for the Congregation of the Doctrine of the Faith by Pope Francis after the abrupt dismissal of its previous prefect, Gerhard Ludwig Müller, in 2017. Some commented that this was because Ladaria was "more malleable".

Well this week Barbarin was found guilty (on Thursday) of covering up historic sexual abuse allegations.

Barbarin was sentenced to a six-month suspended prison sentence for failing to report between July 2014 and June 2015 the sexual abuse allegations made against a priest from his diocese, Bernard Preynat, in the 1980s and 1990s. Preynat is due to go on trial later this year.
"The responsibility and guilt of the cardinal have been confirmed by this judgment. It's an extraordinary symbol, a moment of huge emotion," Yves Sauvayre, a lawyer for the victims, told reporters outside the court in Lyon.


Vincent Neymon, deputy Secretary General of the Bishop's conférence of France (CEF), told CNN that "Cardinal Barbarin has announced that he will present his resignation to the Pope" following the ruling. The Pope must nevertheless accept his resignation for it to take effect.

Chris Altieri in the Catholic Herald contrasts Babarin's case with that of George Pell and suggests the are almost photo-negatives of each other:


Their contrast sets in relief two significant effects of the crisis broadly facing the worldwide Church. Taken together, the cases are also leading indicia of the gravity and scope of the crisis.
In Cardinal Pell’s case, there are grave doubts regarding his guilt and serious concerns regarding the integrity of the proceedings against him. A first attempt at trial ended in a hung jury — which reportedly came back deadlocked at 10-2 in favour of acquittal — and the proceedings were conducted under a gag order supposedly in place to guarantee fairness in a climate of hostility to the accused.
In Cardinal Barbarin’s case, the accused had long since admitted to handling the Preynat matter inadequately. “This is because everything that was advocated, including by Pope Francis, had been for the present and the future,” Cardinal Barbarin told Le Monde in a 2017 exclusive. “Twice I suspended priests and went to court when I learned of recent events — in 2006 and 2014.” The Preynat business, however, was fifteen or twenty years old. “I knocked a little at every door,” Barbarin went on to say, “to ask for advice: What do we do for old incidents?”
“Nobody gave me a satisfactory answer,” Cardinal Barbarin told Le Monde. “I realize today that my response at that time was not up to the challenge.” Nevertheless, even the prosecution asked the bench for acquittal in the case, saying the procurator’s office had no evidence of criminal intent.

Altieri has a stark conclusion to his piece: