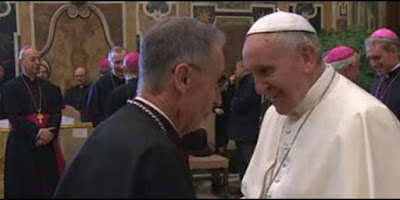 The Tablet reports that a French court has ordered Cardinal Philippe Barbarin, the Archbishop of Lyon, to be tried early next year for “failing to denounce a sexually abusive priest”. The report states that the trial, already delayed twice, will now move forward on 7-9th of January despite the Vatican’s “failure to respond to a summons issued to Cardinal Ladaria".

Cardinal Luis Ladaria Ferrer was appointed prefect for the Congregation of the Doctrine of the Faith by Pope Francis after the abrupt dismissal of its previous prefect, Gerhard Ludwig Müller, in 2017. Some commented that this was because Ladaria was "more malleable".

Lawyers for the victims say Ladaria had advised Barbarin by letter in 2015 to discipline Preynat but avoid public scandal. At the time, he was secretary of the CDF, the Vatican department that handles clerical sexual abuse cases.

The Tablet reports that “Nadia Debbache, a lawyer for the victims, said the Vatican’s failure to acknowledge receipt of the summons amounted to obstruction of French justice. ‘There is clearly a will to drag things out and cover them up,’ she said.” -- sounds familiar eh?

The Tablet reports that Ladaria (another Jesuit)  “denied wrongdoing but admitted his reaction to abuse accusations he learned about in 2007 was ‘belated’.” Preynat was not removed from priestly ministry until 2015 — eight years after the abuse accusations were brought to the now-cardinal prefect’s attention. In what universe is this acceptable?? How on earth can anyone reconcile this with the cause of justice?

The Plaintiff, François Devaux, head of the victims’ group said that the Vatican should not be able to hide behind legal technicalities. “If this takes another three years (to resolve), we’ll hang on,” he said. Thank God for his tenacity I say!

The Barbarin affair has cast a shadow over the French church and newspapers are asking if he will quit. A petition for his resignation, posted online in late August after a priest who is a canon law judge for Lyon archdiocese urged him to step down, has gathered more than 100,000 signatures so far. Surely it can only make sense for anyone in such a compromised position to step down and let some one else have a go? What possible good can it do to hang on when it is clear that you have failed, and that people have no confidence in you? Surely a sign of penitence would be the most didactic course of action any bishop could embark on in this situation?

Interestingly, and in keeping with the reality of an increasing divided Church under Pope Francis, two bishops have supported Barbarin asserting that he has met the victims and tightened measures against abuse. However an equal number have put themselves at a discreet distance from him by stressing Pope Francis' letter to the faithful about clerical sexual abuse:

"The letter of Pope Francis convinced me that bishops could no longer manage this crisis," Strasbourg Archbishop Luc Ravel wrote in a pastoral letter entitled "Better late than never".

"We cannot invoke clauses about discretion or independence and ignore our duty to be aware of what's happening," he wrote, adding he decided to speak out after reading about the reported abuses in Pennsylvania.

My own diocese had a pastoral letter read out on Sunday from our bishop Alan Williams. Interestingly, one Parish Priest I have spoken to since (not my own PP I stress) said that rather than better late than never, it was considered to be too little too late by his parishioners.

I have to say I thought the letter was quite good, and I was pleased that Bishop Williams decided to address the issue, as many bishops seem not to have grasped how distraught so many lay faithful are about it. At a Parish Evangelisation Meeting I had yesterday, there was great pain and anxiety expressed by attendees, not least at how high up the ladder the filth has spread. One of the attendees expressed how damaging it is for evangelisation and how difficult it makes talking to young people about the faith. They are more likely to simply dismiss the very topic out of hand as a result of the revelation of the depth of this hypocrisy. "The Church asks us to confess our sins" he said "but the Church seems unwilling to admit Her own, let alone account for them."

We need to respond to survivors as we heed the words of Pope Francis, “no effort must be spared to create a culture able to prevent such situations from happening”.

It seems to me, given Pope Francis consistent promotion of problematic men to positions of power, his lack of clarity on doctrinal matters, his reinstating of abusing priests defrocked under Benedict XVI, quoting him on this issue does nothing to increase confidence in bishops' own ability to get on top of the problem. If bishops are faithful to Christ, they need to be honest about the challenges facing the Church, they need to start to stand up for Christ and tell the Pope he needs to repent of his problematic positions.