Cardinal Müller: Cardinal Pell's Conviction 'Against All Reason and Justice' 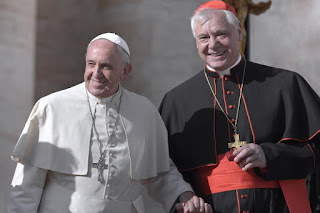 Edward Pentin reports that Cardinal Gerhard Müller, prefect emeritus of the Congregation for the Doctrine of the Faith has spoken out regarding Cardinal Pell's conviction saying allegations that led to Pell’s conviction are “absolutely unbelievable” and “without proof,”.

Cardinal Müller also said the conviction is “absolutely against all reason and justice” and resembles an understanding of justice going back to the time of King Henry VIII.

“Like everyone else, I cannot see the culpability,” Cardinal Müller told the National Catholic Register March 4.

As former prefect of the Secretariat for the Economy from 2014 to 2019 and effectively the Vatican’s treasury minister, Cardinal Pell was the third most senior figure in the Vatican. He is the most senior Church figure to have ever been convicted for sexual abuse.

“Nobody witnessed it,” Cardinal Müller noted, and said that he could not believe it could happen with “all the other persons” probably present after Mass.

The German cardinal said the crime was “supposed to have taken place not in a private house, but in the public cathedral.”

“The allegations against him are absolutely unbelievable, it’s impossible. It’s without proof, against all evidence,” Cardinal Müller said.

“If there’s no proof, you cannot condemn a person to 50 years in a fortress,” he continued.

“It’s an understanding of justice that goes back to the time of Henry VIII,” and “shows a corruption of the juridical system in mainstream public opinion,” he said.