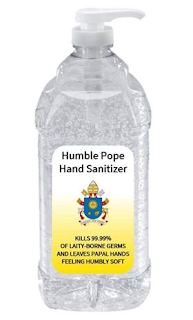 Catholics have traditions which go back centuries, but this pope knows better, and we're supposed to believe what's driving his insight is humility?

So much for "the smell of the sheep" eh?

Initially the Vatican said that the reason for this was because Francis is fickle:

A Vatican spokesman said the Pope was “amused” by the reaction to the video. “Sometimes he likes it, sometimes he does not. It’s really as simple as that”. https://t.co/Cc80WXxOPo
— Fr Walter (@Wally4Jesus) March 26, 2019

They might just as well have said "Well he is a bit of a twit, so don't pay too much attention". Then they gathered themselves together and came up with this gem:

In comments to reporters today, Vatican spokesman @AGisotti said he asked the #Pope this morning why he decided not to let some of the faithful kiss his ring in Loreto. Francis said he didn't want to spread germs among the many who had come to greet him @NCRegister
— Edward Pentin (@EdwardPentin) March 28, 2019

This obviously sparked the above image which some wag has posted on the interwebz and has proliferated at a geometric rate.

Of course, sharing a chalice is not so much of a problem.

I would say we have dissolved into farce but I feel like we did that some time ago and we are now beyond that.