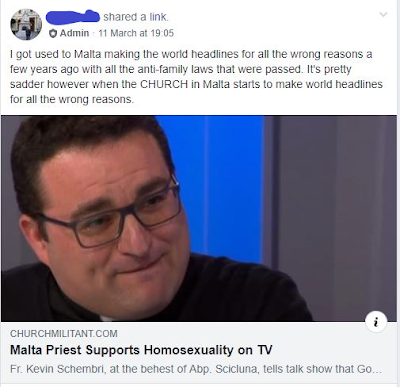 Priests who promote homosexuality in direct contradiction to Church teaching justify their new approach by saying that they are "accompanying" same-sex attracted people to faith. In fact, if one delves even a little below the superficiality of this duplicitous pretence one can see how this nonsense can never work and the reality is that are in fact achieving the opposite.

History demonstrates that SSA people will either work to change Church teaching, as the Westminster LGBT+ group who recently spent time with Pope Francis do, or, if they are honest, they will recognise they only really have two options: conform their lives to Christ or leave.

For a parent, priests who do this are their worst nightmare, particularly in a secular culture that constantly positively promotes such lifestyles. Faced with this parental challenge, where does one go to for help? If you are a Catholic, you go to the Church and her tradition to find a way to guide your child through this challenge. You read the Church's teaching on the care of homosexual persons and you try and find a way to protect your child from the depravity they risk by indulging these feelings while accepting them for who they are and assuring them that they are loved deeply by you - their parents - and by God.

Consider then that there are people from within your own Church family contradicting you and fighting against that? Consider how much damage that does to individuals, to the parental bond and how much pain it causes!

This reality is articulated on Edward Pentin's excellent report on the latest Maltese travesty being promoted by Archbishop Scicluna (which I reported on here). Edward posts a Same-Sex Attracted Catholic’s Perspective:


Additional scandal has been caused by the archbishop’s tolerant treatment of some prominent openly homosexual persons. In April 2017, Vanni Xuereb, a former priest not yet laicized but serving as Malta’s ambassador to Spain, boasted in an article in the Times of Malta of receiving a special blessing from Archbishop Scicluna while processing before or after Mass. Xuereb is reportedly “married” to another man.

“The archbishop is allowing people to mock the Gospel,” a same-sex attracted Maltese Catholic trying to live according to the Church’s teaching, told the Register March 15. He said he is “wondering whether my sacrifices have been all in vain,” and that he would “like my archbishop to tell me that this is not the case.”

After speaking once with Archbishop Scicluna, he said the archbishop tried to “brush off” his struggle, saying the Church loves him just as he is and “we don’t judge you.” Father Schembri’s remarks sounded “remarkably similar,” he said
“It looks lovely on paper but I wasn't convinced,” he said, and so he continued to receive different counsel from his confessor. “Had I not had the grace to be in a long and fruitful dialogue with my confessor, I would have seen nothing wrong with what the archbishop told me and with Father Kevin's words.”

But those words, he said, “are not useful for believers who are gay because they conform to the dictates of society. They are not based on the words of Christ and the teachings of his Church, but rather they are the words of the LGBT propaganda.”


One priest said he had the impression that Archbishop Scicluna had “fallen in line with Rome’s newly-adopted LGBT agenda” and is now applying that “in his diocese.” He said there was “no question” the archbishop, “like practically every other priest in Malta, knew what Father Kevin’s ideas and beliefs have always been.”

I am sure these thieves and betrayers think that what they are doing is safe for them because it is applauded by the secularists. However they do not yet understand that secularists will not stop there; they will never accept the Church and the Gospel of Life She preaches. They may win a small stay of execution for themselves, but the tide will sweep them away all the same in due course. By falling in line with this agenda they simply make themselves an irrelevance and ultimate quicken their own demise.