The reality of hell 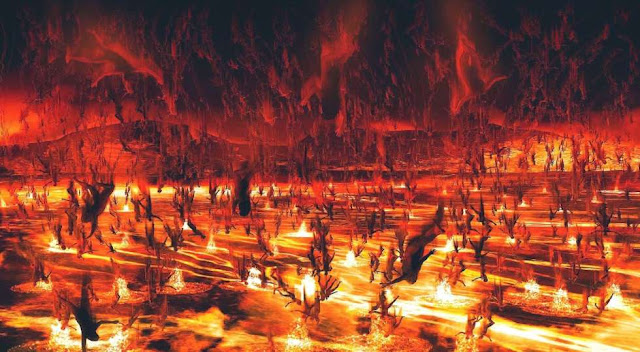 Dan Hitchens makes a really valuable and intelligent defence of the reality of hell in this piece for First Things.

It does worry me that such an important teaching is so ignored today. One of my sons volunteered with our Diocesan Youth Service and the priest in charge told him that the devil and hell did not exist. To contradict doctrine in this way seems to me to be a great sin in itself, but I do understand why it would seem easier to ignore it, especially if you're in the business of encouraging others to sin! I also understand why the teaching has become unpopular. In fact, it makes a lot of sense in today's society in which everything is permitted and nothing ever forgiven. After all isn't it said that the devil encourages you into sin by telling you it's no big deal, and then afterwards tells you that what you have done can never be forgiven? Easier to just say that we don't have to take any responsibility for our actions.

I think Dan's piece is probably inspired, at least in part, by this piece I read earlier in the week in the National Catholic Reporter -- which is anything but Catholic in reality as I'm sure you know. It aggressively attacks the doctrine of hell, but the first thing you notice about Carol Meyer's writing is how her argument comes purely from a position of feelings rather than any grounding in facts. Indeed, she even points this out herself:


I don’t care if scripture mentions hell or Jesus talked about it, if saints had visions of it, or if it’s a time-honored Catholic teaching. It simply can’t be justified on any level.

It certainly would be handy if hell didn't exist, especially if you were aware of the weight of your own baggage and bad decisions, but can you seriously be a Catholic and simply pretend this is not part of the teaching? I think Dan's piece gets across why the doctrine of hell can help us understand our lives now and encourage us to change the way we live.

This is part of Dan's piece (read the full article here)

Sin deserves punishment; in life we can always turn back toward God’s mercy, but the philosophers tell us that at death, the soul can no longer change its ways. Before death we can be swayed this way and that by our feelings and habits. But when the soul is separated from the body, this changeability ends and we are left with a single orientation. If we have turned toward God before death, we will find happiness; if we have chosen something else instead, we are in mortal sin, and our just punishment will continue for as long as we reject God—that is, forever. The inhabitants of hell go on choosing their fate: “The damned are so obstinate in their sins,” writes St. Alphonsus Liguori, “that even if God offered pardon, their hatred for him would make them refuse it.”

The attempts to pick holes in this argument are not, as far as I can see, successful: Interested readers can find a useful series of refutations here. The real objection, I think, is less logical than intuitive: Even if some punishment is necessary, isn’t hell excessive?


But here we are reduced to saying, “Surely…” about things we have not begun to grasp: the hideousness of sin, for example. Most of us, if asked to estimate how bad our sins are without the benefit of revelation, would say that although we hadn’t always conducted ourselves very honorably, we didn’t hurt anyone that much, and after all we’ve had a tough life and we’re pretty decent people overall. We would not guess, if we did not already know, that God came to earth and was humiliated and tortured to death for our sins. Do we really have a clue about the gravity of our offenses? Similarly, none of us have seen what a soul in mortal sin looks like after death, when its good impulses have fallen away and nothing remains but the desire for evil. I could opine on what strikes me as a fair punishment for unrepented mortal sin, just as I could opine, without googling, on the Olympic hopes of Azerbaijan’s national basketball team. But as it happens I know nothing about basketball, and I suspect most of our intuitions about the gravity of sin are worth even less.

Fortunately, we are not totally ignorant, because we have the guidance of the Church. Not just the authoritative teaching statements, though that is enough, but all the expressions of the Church’s wisdom through 2000 years: the standard interpretation of many, many verses in the Old and New Testaments; the sermons of the saints, with their terrible warnings about the next life; the ancient prayer of the Mass that we be “delivered from eternal damnation”; the mystics, including those of the last century, who saw things that nearly made them die of fright; Dante’s Inferno and Michelangelo’s Last Judgment.

And then there is St. Thomas More at his trial, saying that if he was not telling the truth “then pray I that I may never see God in the face”; the little children of Fatima doing their penances to help imperiled sinners, and in the process launching one of the great devotions of the twentieth century; the testimony of exorcists who, in the course of their liberating work, have spoken with demons about the next life; the countless holy men and women who have gone out to preach and care for the sick and spend themselves in love—not mostly, but partly, because they feared what they might hear on Judgment Day; the countless ordinary men and women who have forced themselves into the confessional—not wholly, but perhaps, on that day, mostly, because they believed they needed urgent rescuing. If Catholicism is the work of the Holy Spirit, then it looks like this is one of the truths He wants to lead us to.

Even non-Catholics will have to contend with Jesus’s words on this subject, which seem designed to make impossible the sort of creative rereading of which modern scholars are fond. He speaks, repeatedly, of the unquenchable fire. It is hard to downplay this and call it the fire of God’s love, because he also promises to tell the damned: “I never knew you.” He employs vivid images, like the narrow gate, but you cannot say his teaching is all metaphorical, because he describes literally the desperation of hell: “weeping and gnashing of teeth.” Our Lord does not sound like he is referring to some process of difficult but healthy purification. He sounds like he is warning of a fate worse than death. Get rid of the doctrine of hell, and you will ultimately have to treat Jesus as though he does not know what he is talking about. For any Christian, that is an untenable conclusion.

Is belief in hell a barrier to faith in a loving God? Apparently not, because the saints, whose lives were filled with the love of God and neighbor, saw the reality of hell more clearly than anyone. Perhaps this is not so surprising: It makes sense that those who truly understand the mercy of God also understand the consequences of rejecting it.
Dan Hitchens First Things hell