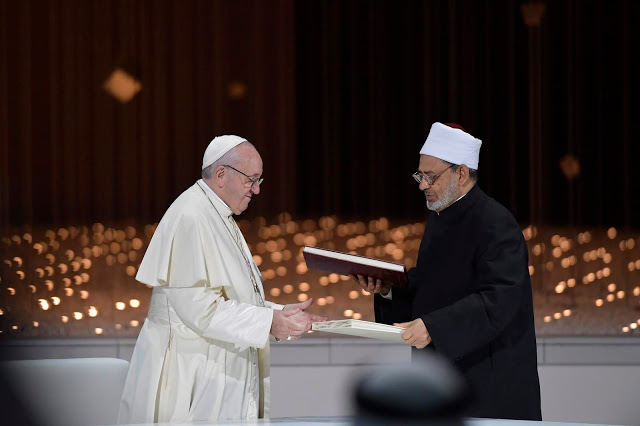 As you have no doubt now heard, a group of Catholics, including some prominent academics, have published an open letter to the bishops of the world accusing Pope Francis of heresy.

The letter, made public April 30, was dated “Easter week” and was, at the time, signed by 19 individuals, including Dominican Father Aidan Nichols, an internationally recognized theologian and author. To date, the letter has garnered about 51 signatures.

20 more signatories have been added to the Open Letter to Bishops, now there are altogether 51 signatories (see at bottom of article): https://t.co/xxiCXRTf42
— Maike Hickson (@HicksonMaike) May 2, 2019

The 15-page letter begins by asking the bishops of the world to take some action against the Pope.

“We are addressing this letter to you for two reasons: first to accuse Pope Francis of the canonical delict of heresy, and second, to request that you take the steps necessary to deal with the grave situation of a [sic] heretical pope.”

The letter lists seven specific areas of Church teaching where the signatories believe the Pope has “through his words and actions, publicly and pertinaciously” demonstrated his belief in “propositions that contradict divine law.”

The complaints focus on supposed teachings of Pope Francis concerning sexuality and morality, which they claim run contrary to the Church’s magisterium. The letter highlights what the signatories believe to be problematic passages from the Pope’s 2016 post-synodal apostolic exhortation Amoris Laetitia, especially concerning Catholics in irregular marital situations.

Among specific heretical beliefs, the letter accuses the Pope of holding the position that a Catholic can, with full knowledge of divine law, violate that law and not be in a state of grave sin.

The letter also references a number of bishops, cardinals and priests whom the authors claim are themselves heretical and the Pope either appointed or allowed to remain in office, as further proof of the Holy Father’s “heresy.”

The letter also suggests that a cross and staff used by Pope Francis during the 2018 Synod on Young People liturgy were respectively “satanic” and proof of a pro-homosexual agenda.

This is of course, the latest in a series of letters issued by committed Catholics who are troubled by this papacy. It does differ from documents like the Filial Correction of 2017 or the statement of the Confraternity of Catholic Clergy requesting clarification on problematic portions of Amoris Laetitia, in that it is addressed to the bishops, asking them to take action by admonishing the Pope, and – if he does not repudiate his alleged heresies – to “declare that he has committed the canonical delict of heresy and that he must suffer the canonical consequences of his crime.”

These consequences would potentially include the loss of the papal office, the letter-writers say: “The Church’s determining that a pope is a heretic, and the announcement of his heresy by the bishops of the Church, is what makes the pope’s heresy a juridical fact, a fact from which his loss of office ensues.”

They reject the “sedevacantist” theory that the Pope could cease to be Pope simply because he had committed heresy. A declaration by the bishops, they say, is necessary. But it would not need to be “a majority” of bishops who took action, only “A substantial and representative part of the faithful bishops of the Church”.

However, as the Catholic Herald reports, such a development currently seems unlikely, as only a handful of bishops have signed previous doctrinal declarations such as 2017’s “Profession of immutable truths about sacramental marriage”, reaffirming Church teaching on Communion for the remarried. Bishop Athanasius Schneider, a co-author of the Profession, said he had talked to “bishops and cardinals” who told him: “I agree with your text, it is completely good, but I cannot sign. I am afraid of persecution.”

Of course the usual crew of papal tailgaters have come out with an array of insults and slander, I thought this effort from Austen Ivereigh was its own shocking kind of heresy:

A group of 19 concerned Scribes have written to the Sanhedrin urging them to act to condemn a Galilee preacher who has stopped the stoning of an adulterer, lunched with tax collectors and welcomed sinners. LifeSite News has published their letter. https://t.co/kqAW1jFHEK
— Austen Ivereigh (@austeni) May 1, 2019

But as usual, Massimo Faggioli (in which he mis-spells Aidan Nichols' name) takes the prize, Deacon Nick Donnelly noted that this tweet was liked by Cardinal Kevin Farrell, which seems to strengthen the argument of those in the letter that Francis has basically appointed a gang of despots and colluders to high positions in the Vatican. Remember Farrell drove Marcel Maciel around for years and apparently knew nothing about his abuse. Similarly, he also lived with Teddy McCarrick for 6 years and knew nothing about his predatory abuse. Is it reasonable to expect him to know anything about anything at all? 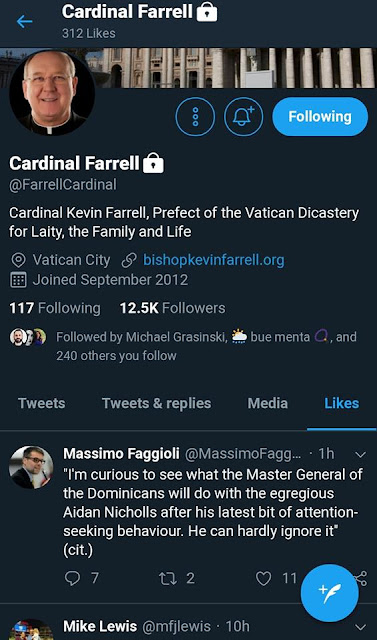 For me, it is a disaster that we even have to have such a letter, but I sincerely believe that those writing it are acting in good conscience and addressing problems which are so blatantly clear at this point that anyone pretending they don't exist is either a complete moron or complicit.

The pope's main function is as a point of unity. Where we have a pope who is fostering division, we have a massive, fundamental problem. Irrespective of what side of the argument you fall on, we should all be able to see that is a reality.

Imagine if, as a parent, your child asked a question voicing grave concerns over something you had done. If you did not answer that question with care, you would be gravely failing in your duty as a parent, more so if the question was in error.

What is consistently clear with commentators like Ivereigh and Faggioli is that their modus operandi is only ever to attack the messenger - they never address the substance of the claims. I repeat: that such claims are even possible constitutes a grave failure for Jorge Bergoglio in the office of St Peter. This is a problem for all of us. It damages the institution of the Church and the authority of the Pope, which is an office which is supposed to offer clarity; to explain the Gospel and Christ's teaching; the deposit of faith, instead we have a pope who seems intent on obfuscating that truth; hinting at directions, supporting new directions through comments and actions which he never clarifies.

As Roberto di Mattei wrote in Rorate Caeli on May 1st:

And this is a Pope who has himself said, albeit in a very small circle, Pope Francis is said to have self-critically further explained himself saying:

“It is not to be excluded that I will enter history as the one who split the Catholic Church.”

The list of pleas to Pope Francis continues to grow, it now includes

The questions is, is there anyone left in the Church who cares enough to do anything about it? 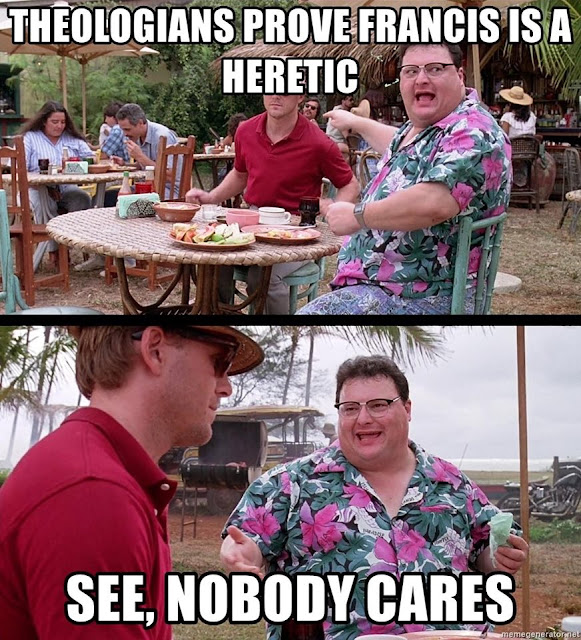 Please do have a look at my website and see if you fancy anything - I supply a wide range of tools and equipment, we have a large range of gardening equipment. Thank you!