The Pope's Faith in Question 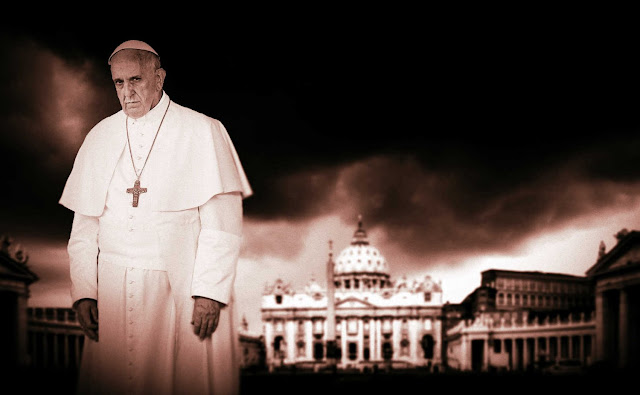 Truly scandalous headlines for Christians emerged yesterday as Eugenio Scalfari of the Italian journal La Repubblica, purportedly a friend of Pope Francis and someone he has granted interviews to repeatedly, claimed Pope Francis told the self-professed Italian Atheist that he believes that 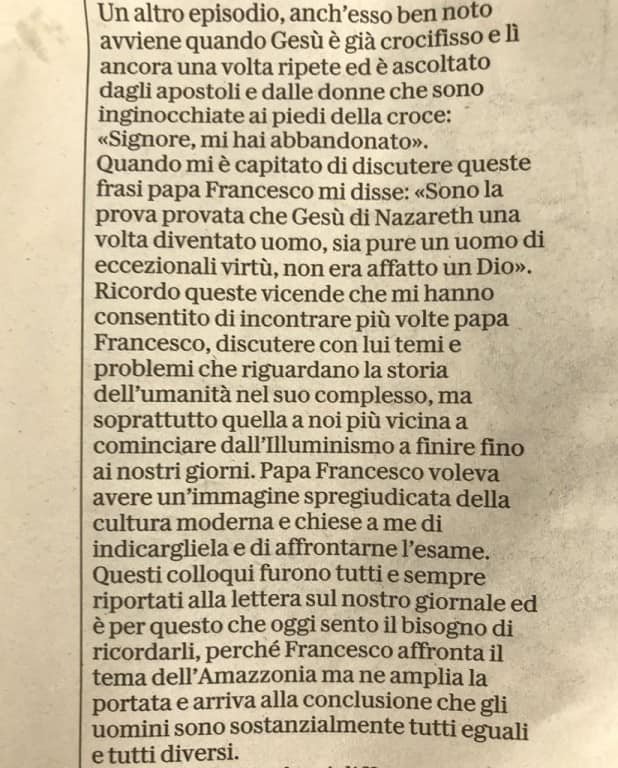 Back in April 2018, the Vaticanista Antonio Socci reported that at least one non-Italian Cardinal (apparently representing a group), had approached Pope Francis to protest in the strongest possible terms over his interview with the Italian Atheist/ Marxist nonagenarian Eugenio Scalfari. This interview was published on the morning of 29th March. In it Scalfari directly quoted Pope Francis as saying — for example — that hell does not exist, and that the souls of sinners simply disappear. As the Catholic Herald pointed out at the time regarding these remarks:


They are all confusing. Some of them are, in the strict technical sense of the terms, heretical and scandalous.


"An uprising of cardinals has (for now) stopped the Bergoglian heresy on hell. The farcical denial and the impeachment risk"

There can be no question that Pope Francis' liaisons with Scalfari are incredibly unwise. But is this latest claim credible? Matteo Bruni, the director of the Holy See’s press office, said in a statement yesterday afternoon:


"As already stated on other occasions, the words that Dr. Eugenio Scalfari attributes in quotation marks to the Holy Father during talks with him cannot be considered a faithful account of what was actually said but represent a personal and free interpretation of what he heard, as appears completely evident from what is written today regarding the divinity of Jesus Christ,”

Scalfari did not claim that he had recently interviewed the pontiff, only saying that this was a topic he had discussed with Pope Francis at some time in the past.

Scalfari mentioned examples in Scriptures in which Christ prayed, among them his agony in the Garden of Gethsemane, to support his thesis that Jesus Christ was not divine.

He wrote that when he raised those points to Pope Francis, the pope told him: “‘They are the definite proof that Jesus of Nazareth, once he became a man, even if he was a man of exceptional virtue, was not a God.’”

Pope Francis has made reference to Christ’s divinity frequently.

In Evangelli Gaudium, the pope speaks of the “divine life” of Jesus.

“The grace which was revealed in our world is Jesus, born of the Virgin Mary, true man and true God...In him was revealed the grace, the mercy, and the tender love of the Father: Jesus is Love incarnate. He is not simply a teacher of wisdom, he is not an ideal for which we strive while knowing that we are hopelessly distant from it. He is the meaning of life and history, who has pitched his tent in our midst.”

“God chooses an uncomfortable throne, the cross, from which he reigns giving his life.”

There's no doubt that Scalfari, who famously does not take notes during interviews has misrepresented Pope Francis in the past.

In 2018, he claimed the pope denied the existence of hell, and the Vatican subsequently said that the pope had not granted an interview, and that the journalist had inaccurately represented a conversation between the men during a private Easter visit. A Vatican statement said in March 2018:


“What is reported by the author in today’s article is the result of his reconstruction, in which the literal words pronounced by the Pope are not quoted. No quotation of the aforementioned article must therefore be considered as a faithful transcription of the words of the Holy Father,”

The first time Scalfari reported that Pope Francis had made comments denying the existence of hell was in 2015. The Vatican dismissed that reporting as well.

In November 2013, following intense controversy over quotes the journalist had attributed to Francis, Scalfari admitted that at least some of the words he had published a month prior “were not shared by the Pope himself.”

It seems very likely to me that Scalfari is being a kind of puppet master and repeating what he wants to hear the pope say to support his own Atheistic views. I'm not saying there is not a problem: no doubt many will simply accept Scalfari's word and that will inevitably damage the Papacy, the Church and people's faith. It also does further damage to the pope himself and his legacy, not to mention the credibility of the office. The real scandal is that the Pope has gone to Scalfari at all, instead of reputable, faithful journalists who love the Church.