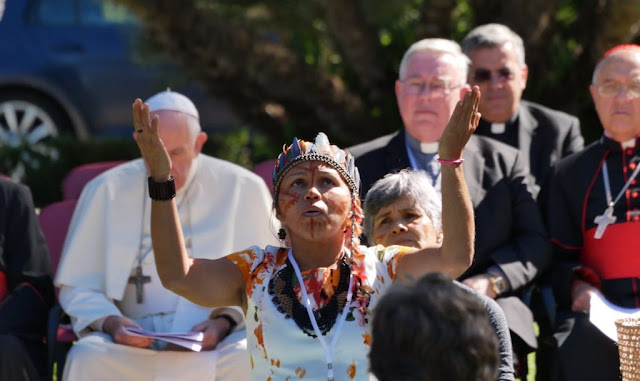 
The Pope acknowledged the idols were "Pachamama"

The posse asks how can we simply declare there was no idolatrous intent as Pope Francis did? How does that make it alright? Where was the theological dimension? This speaks to so much that goes on in Rome under Pope Francis. There was no definitive answer as to what the Pachamama idols were or where they came from or what their relevance or importance was. Instead, we were left to speculate — and there was a great deal of speculation!

I think, like the vast majority of Catholics, I wanted this to be something the Pope didn't know about, something his poor management had allowed to happen, not something he wanted to happen. I even wrote about it, giving Francis the benefit of the doubt, desperately hoping he is on the side of Christ:


What ensued was carnage really where even the pope seemed shocked. Sure he planted the tree, then there was some sort of circular idol worship thing. Apparently, he dispensed with his prepared remarks and simply prayed the Pater noster

But the Pope doubled down, apologising to the idol worshippers! For me, this was him taking ownership for the whole Pachamama inclusion, and it shocked me to the core and saddened me, as well as further eroding any fragile trust I had left that Pope Francis was simply being misinterpreted or misunderstood. This is monstrous!

I also think it provides evidence that the reason the Pope & those who excuse him consistently demonstrate a worrying lack of clarity is that the object is nefarious. Sadly, what else can one conclude except that they are seeking to subvert, to obfuscate, to misdirect; therefore there is no clear, simple and easy answer to any of these questions. They can't tell us what they're really up to, because Catholics would run in horror from it, so all they can do is lie. The Pope famously wanted to make a mess and a mess is what he is making.

Fr Murray makes the excellent point that any apology should have been given to the Catholics who were distressed and offended by the inclusion of these idols, not the idol worshippers! What is this but a sign of how lost this shepherd actually is?

Further damning evidence is offered by Raymond Arroyo, who brings up Press Secretary Ruffini's direct lies about the video of prostration before the idols: Ruffini's statement is simply not true. Some people in the communications office seem to be prepared to lie about embarrassing things. How does this look? Amateurish, ridiculous, dishonest. It is totally preposterous!

Later, in the Church people ignore God really & truly present in the Blessed Sacrament and face and worship an idol. How can there be any excuse or explanation for this? It is objectively and always wrong.

The direction of spirituality throughout the whole synod was wrong—like it was about the pagan religions and cultures of the Amazon spreading their false religions to the Catholic Church rather than the other way around!

And it seems the whole "Amazonian face" thing was merely a sham to push the German agenda. The synod's proposal of celibacy uses false and incomplete definitions to push a political agenda which has long been mooted. As a lay person who has studied theology, none of this makes any sense. It is a clear break with a proper understanding of what the Church is and what authority the pope has. For example, as discussed in the video the argument about the female diaconate is a fabrication which contradicts the life of the Church which has never ordained women to the tri-fold ministry in 2,000 years. The lack of humility of the Pope and his cronies is profoundly shocking! The question, as ever, is what do we do?