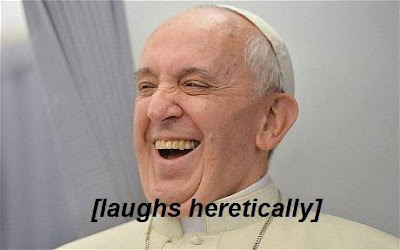 There's been loads to write about as the debacle of #SinodoAmazonico is unleashed on us this week, but if I am honest, I'm not sure I have the stomach for it - it really is just too distressing. The only thing is, I do feel duty bound to record the circus for posterity I suppose, but before I do, please say a prayer for our wonderful priests, many of whom - I know - are suffering terribly through all this, as are all the faithful. I hope you will join me in praying fervently, fasting and offering sacrifices for all this.

There was an interesting moment before the weekend when Cardinal Ouellet came out questioning the direction of the Amazon synod:

Recommended reading: https://t.co/fvu5zNTQrQ Cardinal Ouellet speaks about the need for the Church to deepen its understanding of the tradition of priestly celibacy.
— Hannah Brockhaus (@HannahBrockhaus) October 3, 2019

On Saturday the World Catholic Movement for Climate (GCCM) & REPAM (Pan-Amazonian Ecclesial Network) had a - well, I'm not sure what to call it really - "ceremony"??..with Pope Francis in the Vatican Garden. The Vatican billed it like this:


In the Vatican Gardens, a prayer of consecration of the Synod to the intercession of Saint Francis will be recited, in the hope that this process will lead to discernment of new ways for the Church and for an integral ecology in this key region for the world.

What actually happened was all shades of weirdness, from worshipping wooden idols to giving the Pope a fist bump and a black "tucum" ring.

This artefact was revived by Christians linked to liberation theology. Liberation Theology is a condemned synthesis of socio-political Marxism and Christian theology rejected by the CDF for focusing on institutionalised or systemic sin and for identifying Catholic Church hierarchy in South America as members of the same privileged class that had long been oppressing indigenous populations from the arrival of Pizarro onward.

I could go on - it is interesting - but you can easily research it yourself. The point being, Pope Francis has been consistently accused of having sympathies with this problematic movement as well as having a more political approach to the Petrine Office and being sympathetic to Marxist ideology. Who can forget this: 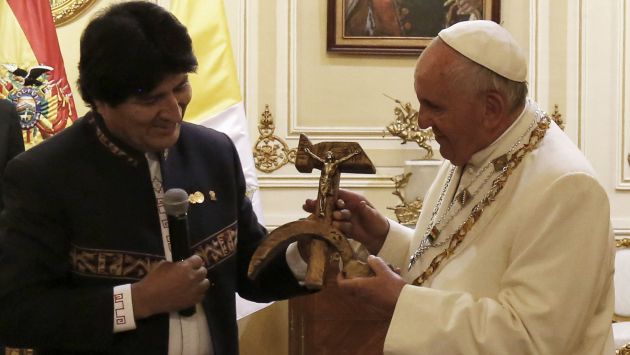 Anyway - back to the Vatican Garden:

After what appeared to be prayers, participants prostrated themselves on the grass around a blanket upon which fruit, candles, and several carved items were set, an indigenous woman approached the pope and presented him with a black ring. https://t.co/iS5yWks5XW via@cnalive

What ensued was carnage really where even the pope seemed shocked. Sure he planted the tree, then there was some sort of circular idol worship thing. Apparently, he dispensed with his prepared remarks and simply prayed the Pater noster

“After witnessing the ritual, Pope Francis set aside his prepared remarks, opting instead to offer the Our Father without comment.”https://t.co/pI88t0yifF
— JD Flynn (@jdflynn) October 4, 2019

What I find particularly interesting about this is that this clearly wacky group, World Catholic Movement for Climate (GCCM), are linked to CAFOD - the official aid agency of the Catholic Church in England and Wales, whose mandate comes directly from the Bishops' Conference of England and Wales. The CAFOD website hosts GCCM documents like this one. So you have to ask, is this where Catholic Parishioners who donate to CAFOD's money is spent? On an organisation that thinks tucum rings for the pope and worshipping "earth mother" idols in the Vatican gardens is a good idea? Some questions need to be asked I think! 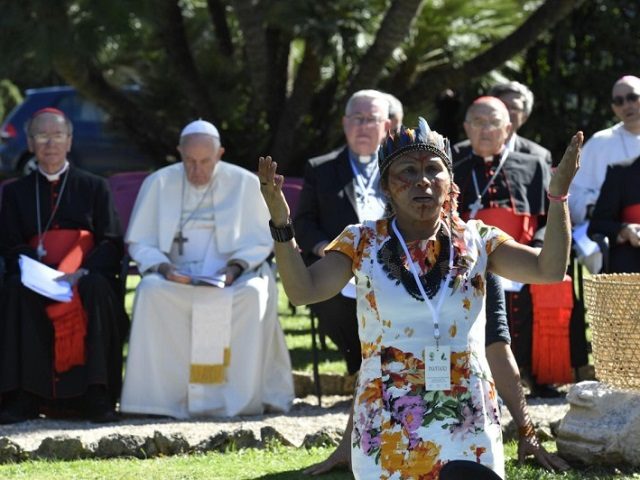 Then there was this:

Did he have any credibility left to lose?

It seemed to develop into this:


The key insights so far for me are all covered really well by Michael Matt in the video below. Women priests, as predicted, is out in the open from the beginning. But more interestingly, so is the fact that those claiming expertise enough to teach the world about Amazonian "issues" seem unaware of the fact that practices like infanticide are rife in the region. There's also no real answer to the fact that 80% of the population of the region live in cities, not in the jungle, so why is the Church so focused on the jungle? The answer seems clear to me; it is a smokescreen for the German agenda and attacks on doctrine.

In the madness of all this - and it is madness, to this extent:

And this image from Cardinal Ouellet's titular see, Santa Maria in Traspontina which has been turned into a shrine to Amazonian propaganda, a jarring contrast to its Baroque interior. This picture of an Amazonian woman suckling an animal hangs in one of its side chapels.

However there is another story which appears to have been practically missed:

After a raid on offices in the Vatican's Secretariat of State, five employees, including the director of the Vatican's Financial Intelligence Authority, have been suspended https://t.co/GienUg5PIZ
— Catholic News Agency (@cnalive) October 2, 2019

Caught between competing interests and abandoning the faith - it really does look like the wheels are coming off this papacy, and it gives me no pleasure, it breaks my heart! Kyrie eleison!