Showing posts from February, 2021
Show All

One of Nine - Catholic Family Life

Today I want to introduce you to the Youtube project One of Nine and encourage you to watch the videos and support the channel  because both Maria & Peter are extremely talented, faithful and excellent advocates for Catholic family life. It is a positive project and it fosters a feeling that faithful Catholic families are not alone. I think this is especially important if you are a priest or religious . Why? Well, because it is frankly, heroic. As well as providing a valuable insight into the reality of Catholic family life, it provides an honest portrayal of just how challenging it is to live the Church's vision for family. Yes there is tremendous joy: I would not advocate an alternative or criticise the vision. It is the one I have chosen with all my heart. But it always comes with challenges, worries and is so often accompanied by the bitter sweetness of loss and longing.  The Catholic community here in the UK is incredibly small. Shockingly small really. I'm not talkin
2 comments
Read more

The Pope is Right not to Arbitrate

I watched this video on Youtube a couple of days ago. It presents an intelligent and well constructed argument which starts out purporting to explain what a bishop is in the Catholic Church, but quickly turns into a rather convoluted apologia for Pope Francis confusing style of governance. I can't escape the impression that ultimately the whole video is a bit of a sales pitch to explain why Pope Francis is doing such a bad job as Pope. Given the way it ends, it presents an extremely circuitous narrative which takes as its starting point, the proper function of bishops but ultimately aims to explain and even justify/ edify why Pope Francis is failing to be clear and correct error. Its final assertion is that his lack of clear teaching is because he is leaving it to bishops to discern the way forward on any number of issues and, moreover, this is the proper method of governance for the Roman Pontiff. Despite the problems evident from any initial viewing, it is well put together and t
Post a Comment
Read more

US Catholic Bishops Give $50k to Abortion Advocates

It is a sign of the times that we simply can no longer trust Catholic bishops to be Catholic any more. This is obviously a problem when we, collectively, give them literally millions of pounds/dollars/euros every year and we trust them to spend it on corporal works of mercy. We should be able to trust them but we can't, as has been demonstrated time and time again. Thank God for intelligent, diligent and committed Catholics like Michael Hichborn of the Lepanto Institute . They do the work so we don't have to and that is work that really needs to be done judging by the content of his latest expose on how the US bishops spend the money US Catholics provide them with.  Every time Michael exposes something like this, the US Bishops go into damage limitation mode, assuring us that they can be trusted, but they appear to be like the little Dutch boy with his finger in the dyke: every time they plug one hole, a couple more spring open. For any of us following the state of the Church
Post a Comment
Read more

It speaks volumes that Cupich' motto is "Peace be with you". He spent ages thinking about that didn't he? Last weekend, Cardinal Blase Cupich was spotted in Rome ( as posted here ), Everyone immediately jumped to the conclusion this was about Cupich's twitterations and fallout with Archbishop Gomez (including me).  Today, the U.S. Conference of Catholic Bishops issued an ill-considered statement on the day of President Biden’s inauguration. — Cardinal Cupich (@CardinalBCupich) January 20, 2021 It seemed that the Pope was supporting his favourite US Bishop and his support of the Biden administration in opposition to Archbishop Gomez. As I wrote here the links between Francis and Cupich are interesting and complicated. Cupich seems to have been brought to the Pope's attention by one of his key supporters, Cardinal Maradiaga. Maradiaga himself is mired in a veritable swamp of controversy. Speaking about disgraced ex-cardinal an serial abuser Theodore McCarrick,
Post a Comment
Read more 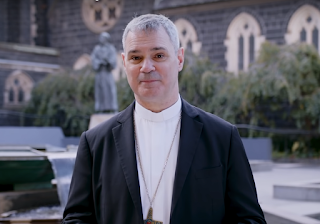 Archbishop Peter Comensoli of Melbourne told The Pillar that the new legislation passed yesterday in the state of Victoria making it a crime to “engage in a practice” directed towards changing or suppressing a person’s sexual orientation or gender identity, infringes on religious freedom and sound medical practice. Too little too late Archbishop! At the point where the legislation has been passed, the discussion has been had and the Church has demonstrably failed in making its case. I really do think the Church has made such a mess of this whole issue. It continues to send mixed messages and consistently fails to teach appropriately. If we believe what the Church teaches it is essential that we are consistent and coherent and (someone has to) take that argument into the public sphere.  The archbishop wrote that the law “includes ill-conceived concepts of faith and conversation, vague definitions, and scientifically and medically flawed approaches. It places arbitrary limitations on p
Post a Comment
Read more

February 04, 2021
I think this is well worth watching, Brian McCall interviews acclaimed author George Neumayr (The Political Pope, published by Center Street in 2017) about the alliances between Pope Francis, Joe Biden and the Global Left.
Post a Comment
Read more 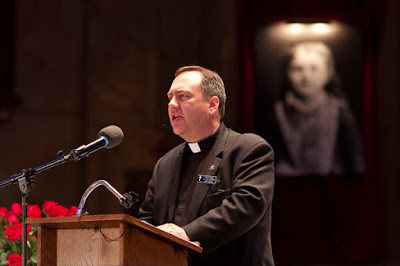 If there is one person who inspired me to start a Catholic blog, it's Fr. Z. His blog is a treasure trove of Catholic devotion, liturgical nuance, pastoral advice, catechesis and carefully crafted commentary on what's going on it the Church. Of course, like all of us, since the appointment of Pope Francis, it's been a little more focused on the strange things the pope does and says, but it still achieves all the other things with enough aplomb to make it a definite internet stop for any interested, faithful Catholic.  As I have already commented, over the US election campaign it is somewhat of a travesty that the US bishops failed to articulate the evil now being visited upon the US in any sort of way. The irony is that they now seem to be astounded by what President Joe Biden in enacting and some have found a voice , others seem to be more clearly complicit in this work of great evil . Father Z and a number of other brave priests took an appropriate stand. I was quite su
1 comment
Read more

In the context of this article by the excellent Phil Lawler, Dr. Peter Kwasniewski offers the following comment: Not long ago, I was involved in a fairly intense discussion of whether Pope Francis is an evil man. One side said "yes, absolutely, you can see that from his years-long patterns of equivocation, ambiguity, and deception, his personnel selections and promotions, his attitude of contempt for tradition, his arrogance, insults, etc." The other side said "no, we don't know enough about his internal state, his knowledge, his capacities, to be able to make such a claim. All we can say is that he's confused, mistaken, and misled." I tried for a while to hold the second position, but then I gave up, as it's so counterfactual. Just read this piece (if you dare) by Phil Lawler about the pope's recent Roman Rota speech, and see what conclusions you draw about the kind of pope who could say such things. As another friend said to me: "I truly beli
8 comments
Read more In the Holy Smoke podcast last week, seasoned UK journalist Damian Thompson analysed the Vatican's attempt to silence the USCCB criticism of newly elected President Joe Biden, which I first wrote about here . This is well worth a listen: I think the first thing to say is that it is obvious that this situation has only arisen because the USCCB did not point out these problems with Biden prior to the election. To me this lack of action sums up the lack of potency in the Church at the moment which means we are paying lip service only to the Gospel: it says to Catholics all over the world that doctrine doesn't matter - that you don't need to follow Catholic teaching - that no rules apply - that the Church could be "wrong" on these fundamental issues of life - that secular society has a point about killing unborn children being a good thing. This is antithetical to Catholic teaching, and, because it is so obviously antithetical, it requires regular, firm & loud
Post a Comment
Read more
More posts