I have lived in the Catholic Diocese of Brentwood all my life. The diocese covers the historic county of Essex, an area of 3,959 km2 (1,500 sq mi) comprising the non-metropolitan county of Essex, the unitary authorities of Southend-on-Sea and Thurrock, and from Greater London, the London Boroughs of Barking & Dagenham, Havering, Newham, Redbridge and Waltham Forest, matching Essex's historic boundaries and the Anglican Diocese of Chelmsford. The see is in the town of Brentwood where the bishop's seat is located at the Cathedral Church of Saint Mary and Saint Helen.

Our current bishop is Alan Williams sm who was ordained in Brentwood Cathedral on the 1st July 2014, as reported on this blog here. The "sm" denotes Bishop Alan's membership of the Marist order (or the Society of Mary) of which he was a former superior from 2000-2008.

The Society of Mary (Marists) was founded by (later) Father Jean-Claude Colin and a group of other seminarians in France in 1816. These seminarians came up with the idea of a "Society of Mary" in the context of the 1815 restoration of the Bourbon Dynasty, in which they saw an opportunity for evangelisation. Jean-Claude Courveille (1787–1866) was the first Superior General of the congregation but it was brought to fruition by Colin. The Society of Mary was founded in a time of great turmoil and difficulty for the French clergy and religious institutions. In this time of unrest arose a strong notion of eschatology within the circle of seminarians that would become the first Marists. It was in this atmosphere that the Marian maxim "I (Mary) was the mainstay of the new-born Church; I shall be again at the end of time" began to circulate. The early Marists saw themselves as the ones to live and minister under Mary's name. That was the core of the spiritual understanding of what they saw as their vocation.

Marist spirituality is largely based on the vision of Jean-Claude Colin. A phrase that was central to his understanding of religious life was "Ignoti et quasi occulti in hoc mundo", hidden and even unknown in this world. For Colin this sentence is exemplary for the way Mary lived the Gospel in a humble, modest and simple way. The Marists are called to imitate Mary in this way of life and ministry. Colin said Marists must "...think as Mary, judge as Mary, feel and act as Mary in all things.".

Colin called the missionary and pastoral activity of the Marists the "Work of Mary". According to Marist tradition the Society of Mary as a whole and every individual Marist is called to be an "Instrument of Mercy" for all mankind. As Mary was a healing presence in the Early Church so the Marists want to be present in the Church of their days.

In Great Britain, the Marist foundations began as early as 1850 at the request of Nicholas Cardinal Wiseman, Archbishop of Westminster, but have not grown beyond three colleges and five parishes.

Bishop Alan is the 7th Bishop of Brentwood and succeeds Bishop Thomas McMahon (who was appointed on 16 June 1980 and resigned on 14 April 2014). He was born in Oldham in Lancashire in 1951 and He trained for the priesthood at Allen Hall before which he obtained a degree in Natural Science from Durham University and a PhD in Psychology from London University. He made his solemn vows in the Society of Mary on 8 September 1976, took final vows in 1981 and was Ordained priest in St Anne’s Whitechapel in 1983.

Despite the fact that Bishop Thomas McMahon was my bishop for 34 years, and I worked for him on a diocesan level at Cathedral House on occasion, I have already had the privilege of spending more time in conversation with Bishop Alan than I ever did with Bishop Thomas. Perhaps this is a mark of the man's natural pastoral instinct; that, dare I say it, he exudes the definition of a priest given by Pope St. John Paul II of 'a man for others'?

In conversation, Bishop Alan is an intelligent, thoughtful man, with a down-to-earth, realistic sense of humour and a broad experience of life. He comes across as someone who loves people and (very importantly) loves his priests. You can feel his intellect pressuring you to join with him in his episcopal mission in a way which seeks to draw you into partnership with his vision. His leadership style is non-confrontational; he does not seek to cause conflict but rather to form a coalition and move forward together. In his own words he hopes he can bring everyone with him. He has a clear vision of his direction, which he confidently articulates is unremittingly orthodox. His faith is firmly rooted in the teachings of the Church and the revelation of Jesus Christ and he says that he has received a great outpouring of grace and energy since his episcopal Ordination.

As a business leader myself, I know that leadership, though rewarding, is incredibly hard work. You inevitably upset some elements in any community you lead. Please pray for Bishop Alan as he shoulders the incredible burden of being our Bishop. 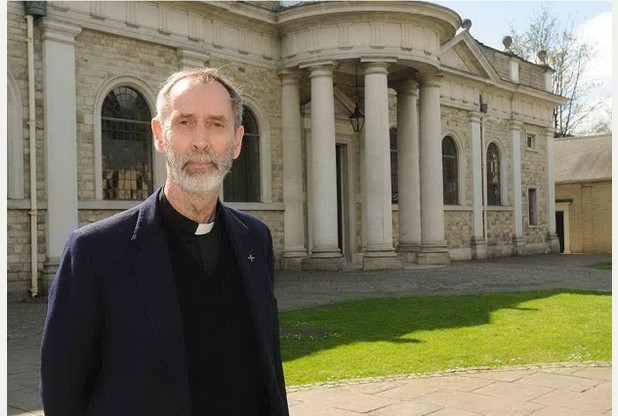 
Episcopal Ordination of the Bishop of Brentwood from Paul Desmond on Vimeo.