The Battle of the Two Popes 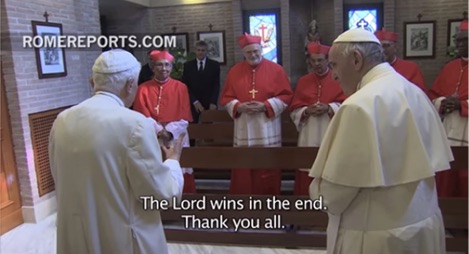 One of the things I find most perplexing in the Church today is the mystery of the Pope Emeritus. I look back on the Papacy of Benedict XVI as an incredibly happy time for the Church. I hung off every word. Looked forward to every encyclical, everything made sense, everything fitted with Catholicism, there was comfort, unity, learning, growth, confidence.

Now that seems all ashes, though I have heard it said that Benedict XVI is and was a Pope who will be read and pondered for a hundred years and Francis I will be immediately forgotten.

Benedict XVI famously prayed that he "would not flee from the wolves" at his inauguration Mass, then, it seemed he fled. And now we well and truly have wolves.

And as if to add insult to injury, there have been punctuated Benedictine interventions offering support for Pope Francis, even though many have questioned their veracity.

In fact, the Vatican has clear form in fabricating the Pope Emeritus' opinion of Pope Francis, going as far as selectively editing a letter from Benedict to make it appear favourable, when it was actually a criticism. In typical Pope Francis fashion, Dario Edoardo Viganò, Prefect of the newly established Secretariat for Communications and therefore the man directly responsible for the misrepresentation, resigned as prefect on 21 March 2018 following extensive media discussion of these misrepresentations....And then Pope Francis named him assessor of the Secretariat, a newly created and undefined post.

Earlier this month, Pope Benedict XVI reportedly told a crop of newly appointed Cardinals "to be faithful to the pope".

Why would he say that? Does he need to say that?? Is he speaking more generically about loyalty to the Pope? He is saying that Jorge Bergoglio is not the real Pope and Cardinals should be loyal to the true Pope? Is he saying we should be loyal to Pachamama worship and liberation theology?

Forgive my cynicism, but we don't actually hear the Pope Emeritus say these words, it's just reported that's what he said. Still...

Why would I be surprised at this comment? Well, largely because anyone with even a smattering of theology who has been watching this papacy unfurl can see that it is a rolling back of the Ratzingarian defence of Catholicism against destruction from within, a battle he fought his whole life.

In this article, the veteran Vaticanista Marco Tossati looks at the evidence:

"It was Ratzinger and John Paul II who identified the Marxist Catholicism of Latin America as one of the cancers of Catholicism. And they called Gutierrez, Boff, Casaldáliga and Gerbara to return to the true faith. This is most interesting in light of certain facts: Among the main papal electors of Bergoglio was Brazilian Cdl. Claudio Hummes, who in his youth was publicly associated with liberation theology. And now today Bergoglio has convoked a Synod on the Amazon, which is mostly located in Brazil, and he has chosen Cdl. Hummes as the Relator General of the Synod.

I look at what is going on, and I look at the privileged men who are breeding confusing, contradicting the Catholic teaching I thought could not be called into question, especially by men in such high ranking positions in the Church, and I wonder what they have put on the line?

I've bet my family, my career, my life on the faith. I have lost friends and family and work opportunities because of what I hold sacred. What have these men lost?

Having bet so much on my faith, do they think they can convince me to give it up for something else without even any cogent argument as to why they are right and 2,000 years of Catholic Tradition, of Popes, of Bishops, of Saints and Martyrs and Doctors of the Church are wrong and they are right?

I am supposed to turn away from Christ, His Mother and the Church and embrace a syncretic semi-pagan ecological/Marxist cult? Really?

Perhaps Pope Benedict XVI is wise to counsel loyalty to the Pope. There's no doubt in my mind that Jorge Bergoglio and his cronies are wrecking 2,000 years of Catholic history. But until there's a formal declaration that Bergoglio is a heretic, Benedict and whoever has the good of the Church at heart cannot make rushed judgements. Loyalty is a good thing especially when you are a Cardinal and the Father of the family is sick and under attack.