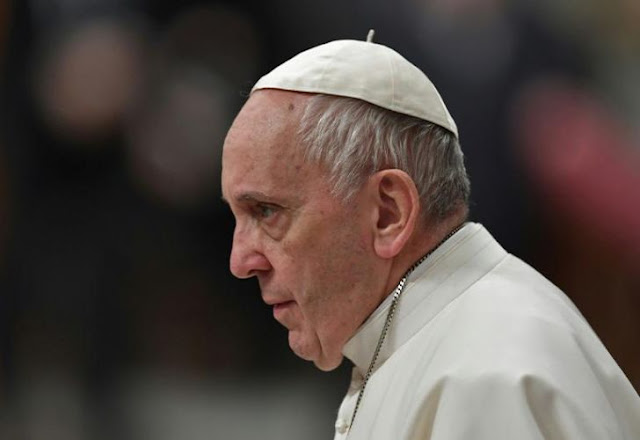 After the Pope admonishes Italian footballers (soccer players for my American readers) for making the sign of the cross before matches, I had to - yet again - cock an eyebrow and say "what the...?"

Italy’s soccer manager Roberto Mancini says he made a Sign of the Cross during games but “then we went to the Pope” who said, “‘Why are you making the Sign of the Cross, don't you have other thoughts at that time?' So since then I don't do it. I don't want to make the Pope angry” https://t.co/SLH2NrdDXT
— Edward Pentin (@EdwardPentin) December 23, 2019

The Pope has previously caused a great deal of consternation by not making the sign of the cross, on numerous occasions he has refused to give his apostolic blessing at an audience:

This morning Pope Francis met with the Italian Red Cross. The Pope refused to give his Apostolic Blessing, probably as not to offend the handful of non-Catholics. Instead saying "I ask the blessing of God - God the Father of us all, Father of all confessions - on you all" pic.twitter.com/6wbTdIdoYc
— Catholic Sat (@CatholicSat) January 27, 2018

Again you wonder what on earth is he doing??

Who can forget the weirdness back in March when he decided to sharply withdraw his hand from anyone trying to kiss the papal ring?

And then there are instances like this when he ridiculed an altar boy for standing with his hands together in a prayerful posture:

This young altar boy was in a reverent prayerful posture and this bully "pope" asked him if his hands were bound together and said it seems like they're stuck. No prayerful hands, no sign of the cross, and no converting people, I am starting to believe Francis is possessed. https://t.co/WUzVRZvVsr
— Dies Irae (@DiesIra40315598) December 24, 2019

And yet this all contradicts his prepared general audience catechises where he has spoken about the importance of making the Sign of the Cross. As always with Pope Francis, the words and the actions rarely correspond!

Whatever he intends by these mixed messages, it is hard to reconcile them with the man who is charged with the office of the prince of the Apostles.

It is quite extraordinary that there are still people trying to explain away the strangely anti-Catholic things the pope does and says, many of them even blame the faithful, criticise the laity for not understanding. Honestly it’s like enabling an abuser!

Dr Peter Kwasniewski wrote a blistering critique of the Pope's Christmas address posted at The Remnant. He has also constructed a word cloud which bore interesting results which speak for themselves. 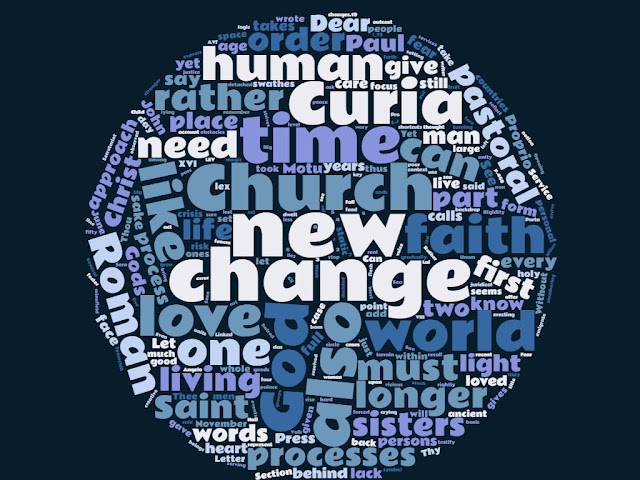 Whatever inspiration Newman may or may not have contributed to this address, one thing is clear: for Pope Francis, to be perfect is to talk about change often.

I think he should have concluded his address: "𝑴𝒆𝒓𝒓𝒚 𝑪𝒉𝒂𝒏𝒈𝒆𝒎𝒂𝒔!"

Couple this with his UN involvement where he recently gave a speech calling for a new supranational "legally constituted authority" to meet the great moral evils of "climate change" and "new slavery" to tackle "global challenges facing humanity, such as integral development, peace, care of our common home, climate change, poverty, war, migration, human trafficking, organ trafficking, the protection of the common good and new forms of slavery." All sounds great, but the UN's unabashed agenda in this direction mostly involves contraception and abortion to stem the growing population.

And let's not forget his visit to the UAE where he signed a “Document on Human Fraternity for World Peace and Living Together” with Sheik Ahmad el-Tayeb, Grand Imam of Cairo’s al-Azhar Mosque, during the interreligious meeting in Abu Dhabi on Feb. 4.

The document incited controversy among Christians for asserting that “the pluralism and the diversity of religions” are “willed by God in His wisdom” – a statement many believe contravenes the Catholic Faith.

It seems very much like the direction of travel is towards no religion. Or am I missing something?