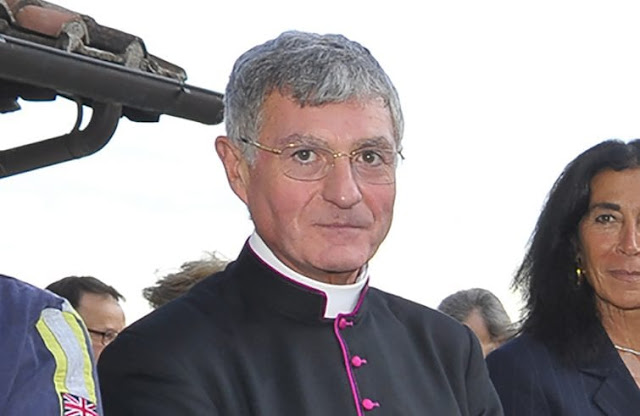 Remember when, on a papal flight, the Pope called it "good administration" to sink $220m of Peter's Pence money into a luxury property development in Chelsea, London? Well, it appears investigators in the Vatican disagree.

Breaking news from CNA: Vatican official Monsignor Perlasca has been raided over the London property deal. Perlasca was the former head of the administrative office, First Section, Secretariat of State.


Vatican authorities have seized documents and computers belonging to a senior curial official as part of an investigation into financial misconduct, the Holy See announced on Tuesday.

In a statement issued Feb. 18, the Vatican press office confirmed that investigators had raided the office and home of Msgr. Alberto Perlasca, the former head of the administrative office at the First Section of the Secretariat of State. The raid is part of an ongoing investigation into financial misconduct by officials at the secretariat.

“This morning, as part of a search ordered by the Promoter of Justice, Gian Piero Milano, and the deputy, Alessandro Diddi, documents and computer equipment were seized at the office and home of Msgr. Alberto Perlasca,” the Vatican statement said.

Perlasca was the head of the Secretariat of State’s administrative office from 2009 until July 2019, when Pope Francis appointed him Promoter of Justice at the Supreme Tribunal of the Apostolic Signature; chief prosecutor of the Church’s highest ecclesiastical court.

The statement confirmed that “the measure was taken in the context of the investigation into financial investments and the work of the Secretariat of State.”

The raid on Perlasca’s home and office was in connection with “interrogations” of the five suspended officials, the statement said.

CNA has reported that the property was acquired by the Secretariat of State in a staggered series of purchases financed through loans by two Swiss banks, Credit Suisse and BSI. BSI was subsequently closed by financial authorities for systematic failures to prevent money laundering activity.

The building, at 60 Sloane Avenue in west London, was bought from Italian financier Raffaele Mincione, who arranged the Vatican’s purchase through a string of his own companies and investment funds, making hundreds of millions of euros in profit from the deal.

The principle vehicle for the Secretariat of State’s investment in the property was Mincione’s Athena Global Fund, which was used by Mincione to make no-strings-attached loans to another of his companies, Time & Life SA, through which he made high-risk speculative investments for himself, and helped an Italian bank illegally evade financial regulations.

CNA has also reported that another fund in which the Secretariat of State invested tens of millions of euros has links to two Swiss banks investigated or implicated in bribery and money laundering scandals involving more than one billion dollars.

The raid on Msgr. Perlasca comes one day after Cardinal Angelo Becciu, the former sostituto at the Secretariat of State, told Italian media that "not everything was clear" about the London investment.

“So, I mean, did everything go well? No, there was something that didn't go well,” Becciu told Huffington Post’s Italian edition.

Although he commented on the details of the project’s financing, the cardinal insisted that he is not personally not under investigation, pointing instead to two suspended members of his former staff at the Secretariat of State, Msgr. Mauro Carlino and Dr. Caterina Sansone, both of whom reported to Becciu during his time as sostituto and were registered as directors at the London holding company responsible for the development.
Cardinal Giovanni Angelo Becciu Chelsea Property Deal Monsignor Gian Piero Milano Vatican Bank