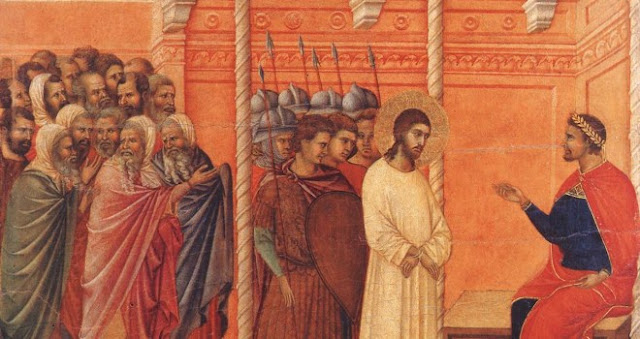 I have been subscribed to Cameron Bertuzzi (a Protestant apologist who runs a Youtube channel called "Capturing Christianity") for a while now as part of my "focusing on kerygma" thing. I find it very refreshing to listen to Christians talk about their faith.
I find their faith, devoid of the Magisterium and in some sense at war with Tradition, much more "raw" and focused on the Person of Jesus.
I have found that they never-the-less rely far more on Catholic sources than they often even realise I think. Certainly more than they would care to admit. I'm not attacking that, I'm saying that at this point in history, so far removed from the Reformation and associated movements that split the Church so painfully, people are born into traditions which seek to follow Jesus in honest ways and to observe such honest faith is deeply moving to me. It moves me because I can't help but feel that Protestant Christians do not enjoy all the benefits I do as a Catholic. Their experience is born of a paring down of Christianity to fundamental elements. This means they miss out on much of the beauty, the intellectual foundations and traditions and the supernatural help gained from the Sacraments, especially the Eucharist.
Their reliance on Catholic sources, Early Church Fathers, or Saints like Thomas Aquinas, points to a recognition and desire for truth.
The more I engage with this material (and this has been particularly vivid watching The Bible Project videos) the more I discern that honest intellectual enquiry leads one increasingly towards Catholicism. The more Tim Mackie sermons I have watched the more I see him shocking audiences as he moves away from fundamentalist ideas and demonstrates Catholic principles self-evident in scriptural realities: born of intellectual integrity. Of course, they do not see these things as Catholic, but engaging with devotees on line has shocked me as to how much their new ideas and revelations are completely in-line with my "old" ones! Perhaps we are closer to one body than we would care to admit?
This is wonderful! And when one is engaged on this journey with a heart open to Jesus it gives great encouragement, because it is clear evidence that:
1. God has embedded truth in creation, in our hearts and in history and we can discern that truth if we bend our wills honestly towards the end which is Him.
2. Our Catholic faith embodies these truths in a way which draws all those who seek truth honestly to be united with Jesus in a dynamic way.
3. It is demonstrative of the object nature of this truth, which encourages us to recognise it has a single point of origin.
When we focus on what we have in common and on our common desire for Christ we can affect the world much more than when we are divided and focused on our petty factions.
Bertuzzi is a self-proclaimed amateur philosopher which I identify strongly with. Much of the material he produces revolves around the big questions Christianity seeks to address. I think approaching faith in this way, using reason, is typically masculine: that is, it particularly appeals to men who tend to a more lateral approach. I think it has long been a theme of this blog that we need to encourage this approach. Faith needs to make sense, especially to men. If you take a look at his channel, there's a lot of stuff on their that appeals to me. There's a lot of Catholic related stuff where he discusses arguments for and against Catholicism, a lot of philosophical enquiry; arguments for and against God for example, enquiring about spiritual beings, all topics that really interest me and strike me as typically male.
Honestly, I think we can learn a lot from this. I worry that in this world of social media enclaves and echo chambers, where we rarely interact with people who have different opinions to ourselves, we are rapidly losing the ability to dialogue and hold different opinion while still being civil. We need to learn how to have a conversation again, especially with people who have different ideas to us.

In this video, Bishop Robert Barron is interviewed about Catholicism, the argument from beauty, Aquinas, Exorcism, and many other topics. Cameron asks Bishop Barron "Should I become Catholic" and goes on to ask why he is excluded from communion at Mass - a really common question I have often been asked. Honestly I think +Barron deals with this brilliantly and gives a beautiful exposition of the Catholic faith. He reads his interlocutor beautifully and tailors his discussion to speak to his heart and the positives he discerns in the discussion (for example, note the biblical emphasis throughout the discussion).

Bishop Barron always comes across as having the knowledge at his fingertips and as someone deeply committed to his faith in Catholicism as the fullness of revealed truth about our lives.
apologetics Bishop Robert Barron Cameron Bertuzzi Capturing Christianity the bible project