It Doesn't End With Becciu 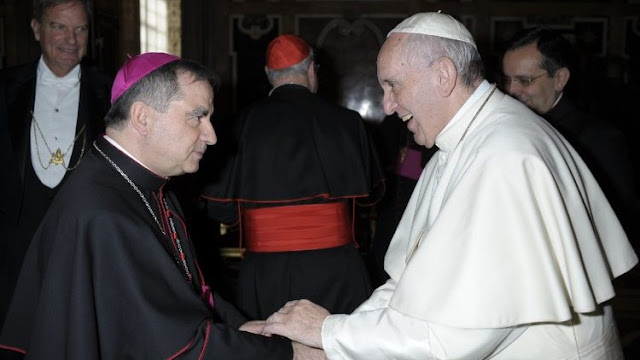 The essential questions for journalists now must be: who are Becciu's allies? Who are his supporters, his advocates, his followers? Who can he be connected to in the curia?

Becciu denies interfering in Pell's trial - so where did the AUS$1M he transferred to Australia go to? Why was it sent? It needs to be laid out clearly with a full accounting!

I would speculate from Beciu's reaction that he was surprised by his sudden defenestration. This would mean that however problematic his actions, he was acting with the knowledge of his superiors (Parolin & the Pope) and he is the fall guy for something...We do not know what yet (and we may never know).

It is hard to see how anyone could think Becciu could have acted unilaterally here: anyone who has even a basic idea about how the Vatican works knows that he could not have blocked inspections, paid out bribes and cooked the books without full knowledge of his superiors. So what was his relationship like with Parolin? Both Parolin and Becciu appear to now be out of favour with the Pope, but for Becciu & Parolin to have acted to stop the Price Waterhouse Cooper Audit of the IoC commissioned by Cardinal Pell in 2016, the Pope must have been aware and backed the move surely?

"Of course I believe that you knew nothing about me being sidelined and having my authority taken away."
"I am absolutely certain as soon as you knew anything about Becciu you sacked him"
"Yes, you are as innocent a a spring lamb". pic.twitter.com/ZkvHS7Fom4 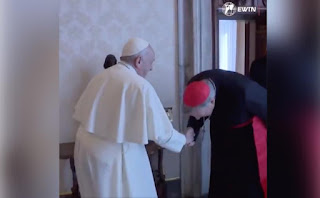 An alternative scenario is one where Parolin had complete autonomy and the Pope was backing Cardinal Pell. This would seem to be the narrative being reinforced by the Vatican presently; the Pope could have met Pell privately, but instead he chose to allow cameras. This would appear to portray the Pope and Cardinal Pell as allies, but the Pope's rude withdrawal of the papal ring and his strange body language throughout, coupled with what seems to be a strange and uncomfortable tone, makes me wonder if he doesn't actually like Pell and this show is being made for another reason - i.e. to distance himself from the Parolin - Beccui axis: is more about to be revealed? New revelations seem to come daily in this story as the Italian press enter a kind of feeding frenzy.

She allegedly was in possession of credentials signed by ++Becciu.#CatholicTwitter pic.twitter.com/yiaDLrBnUR

Notably, back in January 2016, while discussing books that charged the Vatican with financial mismanagement, Becciu defended Vatican employees: "The Vatican is not a den of thieves. To represent it as such constitutes an absolute falsehood. I find it extremely unjust that our employees, proudly carrying out a service for the pope and the church, have gotten to the point, for some time now, of being ashamed to tell people they work here." [Glatz, Carol (15 January 2016). "Archbishop says Vatican officials are 'ashamed to tell people' where they work". Catholic Herald. Retrieved 8 February 2017.]
Not a quote that has aged well!

Riding in on his white charger to save the day is....Cardinal Kevin Farrell????!!!

The decision to appoint Farrell is extraordinary given his clear connection to McCarrick and the fact that because of this widely known reality, and his subsequent denials, he is seen as clearly one of the most duplicitous Cardinals in the world. Moreover, the jurisdiction of Farrell's new position seems strange encompassing almost anything the Vatican needs to exist. What does this mean?

Farrell's appointment may well have some diabolical motive, but given the public debacle of this papacy, I for one am left wondering if it is more incompetence and naivety? For example, one has to wonder if Francis just promotes his mates irrespective of their competence? What is it in Farrell's history that has qualified him for such high office and responsibility? Consider all the clearly problematic characters Pope Francis has elevated to key positions. The most likely reason for Farrell's appointment is that he has no involvement in historic deals and Parolin has been removed to create distance between him and any future repercussions. That means that there is something that Parolin needs to be protected from and Becciu is the fall guy. The question is, what?

Worth watching this commentary from EWTN's Papal Posse: