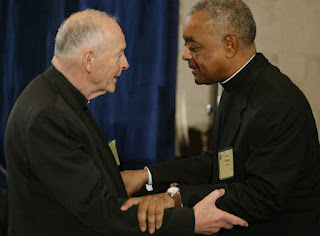 On Tuesday 24th November, a few days before the consistory in which  Wilton Gregory was made a cardinal of the Catholic Church, JD Flynn posted an analysis of recent comments by the Archbishop of  Washington that he is happy to give Holy Communion to Joe Biden.

Gregory, who was then made a cardinal at the weekend, told a journalist on Tuesday that in his diocese, he will not deny Holy Communion to a politician who has pledged to enshrine access to abortion in federal law and permit federal funding of abortions.

This seems to be in defiance of the recent US Conference of Catholic Bishops statement which, though massively hypocritical in itself, did point out that there were serious problems with some of Biden's policies.

The conference president, Archbishop Jose Gomez of Los Angeles, closed the meeting on Nov. 17 by announcing the creation of a bishops’ working group to prepare for the Biden presidency. The USCCB president noted several Biden policies that “pose a serious threat to the common good, whenever any politician supports them.”

Gomez went on to observe that “when politicians who profess the Catholic faith support them, there are additional problems. Among other things, it creates confusion among the faithful about what the Church actually teaches on these questions.” - it seems quite astonishing to me that this had only just dawned on the USCCB - it would have been quite useful to make such a statement at the beginning of the election campaign, but, that would have actually been useful & informed those facing a difficult choice and we could not have bishops doing their duty, could we?

Anyway, as a consequence of this, Gomez announced the formation of a special committee, chaired by Archbishop Alan Vigneron of Detroit, and made up of the heads of various USCCB committees to “emphasize our priorities and enhance collaboration.”
Some important historical context: back in 2004, Cardinal Joseph Ratzinger, then head of the Church’s doctrinal office, told U.S. bishops in a memo that a Catholic politician “consistently campaigning and voting for permissive abortion and euthanasia laws” is engaged in “manifest” and “formal cooperation” in grave sin.

In such a case, the politician’s “pastor should meet with him, instructing him about the Church’s teaching, informing him that he is not to present himself for Holy Communion until he brings to an end the objective situation of sin, and warning him that he will otherwise be denied the Eucharist,”.

If the Catholic perseveres in grave sin and still presents himself for Holy Communion, “the minister of Holy Communion must refuse to distribute it.”

Ratzinger’s memo was an application of canon 915 of the Code of Canon Law, which says that Catholics “obstinately persevering in manifest grave sin are not to be admitted to holy communion.” In short, this memo gave bishops a clear instruction on how to apply the Church’s law. On Tuesday, Archbishop Gregory said he has no plans to do so.

Students of Catholic moral teaching discover what the most simple of faithful Catholics intuitively know. There is an impressive, coherent, logical unity to God’s law as we know it through Church teaching. Failures of vigilance and strict adherence to principle quickly shatter that unity.
In 2004, when U.S. bishops discussed pro-choice politicians and the Eucharist, one cardinal among them was charged with summarizing the memo sent from Ratzinger to bishops on the subject, as few of them had yet received it. The cardinal downplayed the memo, saying addressing the matter at all was up to the discretion of U.S. bishops.

“The question for us is not simply whether denial of Communion is possible, but whether it is pastorally wise and prudent,” the cardinal said.

That cardinal was Theodore McCarrick.
At the 2004 spring meeting of U.S. bishops, which took place in Denver, McCarrick inaccurately summarized the instructions of the Vatican on Holy Communion, omitting Ratzinger’s normative direction. Under McCarrick’s influence, the bishops decided the best way to handle the question was to defer to the individual judgement of bishops.

The memo, incidentally, was sent ahead of the meeting to two U.S. bishops: McCarrick, and the president of the U.S. bishops’ conference, Bishop Wilton Gregory.
Flynn appropriately points out that Gregory's remarks on Biden will be seen by many as a setback to reform. Some will argue that Gregory has substituted his own judgment for the law of the Church, and the Vatican’s instructions on how to apply it. That practice is the kind of clericalism that made the McCarrick scandal possible.
Now, Archbishop Charles Chaput has weighed into the argument. Writing in the magazine First Things on Dec. 4, the archbishop emeritus of Philadelphia warned that individual bishops who publicly announce their intention to give Biden Communion risk doing a “serious disservice” to Biden, and to the rest of the American bishops.
“By his actions during the course of his public life, Mr. Biden has demonstrated that he is not in full communion with the Catholic Church,” Chaput wrote.

“To his credit,” Chaput noted, Biden “has championed many causes and issues that do serve the common good. However, many of his actions and words have also supported or smoothed the way for grave moral evils in our public life that have resulted in the destruction of millions of innocent lives.”

“Mr. Biden has said that he will continue to advance those same policies as president, and thus should not receive Holy Communion. His stated intention requires a strong and consistent response from Church leaders and faithful.”
Whilst this public disagreement is less than desirable in a faith that proclaims objective truth, I welcome Chaput's intervention because he is teaching Catholic truth. Cardinal Gregory’s refusal to abide by Canon Law (along with many other bishops and their priests) undermines the authority of Canon Law & also encourages the faithful—not to mention government officials—to do the same. The ramifications are ominous. If Canon Law & Church doctrine does not apply to our highest ranking prelates why should it to priests and their people?
So where does this leave Gregory?

We pray for Archbishop Wilton Gregory to bring renewal in the Truth of Jesus Christ to Washington D.C.

Cardinal Gregory’s manifest intention to violate Canon Law prompts the question: Can we trust priests and bishops who are willing to violate Church law—and doctrine—in this grave matter on the one hand, to defend the inviolable Seal of Confession on the other? Indeed, can we trust the same priests or bishops to uphold all those episcopal “policies, procedures, and protocols” designed to guard against clerical child abuse?

A South Dakota priest recently sentenced to prison for embezzlement said he stole, in part, because he disagrees with the Catholic doctrine on homosexuality. Perhaps he expected his bishop to use McCarrick’s logic: “The question for us is not simply whether prosecution is possible, but whether it is pastorally wise and prudent.”

It is interesting to note that Chaput who built a reputation for faithful witness to Catholic teaching, was passed over for a Cardinalate and Gregory, despite his obvious connection to McCarrick, was not. As I posted here, the pope is pretty open about appointing those who support him to high office and blatantly ignoring those who speak out for the faith. As bad as the chaotic fruits of this confusing papacy already are, there are signals of a much darker, much more worrying agenda which directly contradicts efforts to build the Kingdom of Jesus just underneath the surface.