US Catholic Bishops Give $50k to Abortion Advocates

It is a sign of the times that we simply can no longer trust Catholic bishops to be Catholic any more. This is obviously a problem when we, collectively, give them literally millions of pounds/dollars/euros every year and we trust them to spend it on corporal works of mercy.

We should be able to trust them but we can't, as has been demonstrated time and time again. Thank God for intelligent, diligent and committed Catholics like Michael Hichborn of the Lepanto Institute. They do the work so we don't have to and that is work that really needs to be done judging by the content of his latest expose on how the US bishops spend the money US Catholics provide them with.

Every time Michael exposes something like this, the US Bishops go into damage limitation mode, assuring us that they can be trusted, but they appear to be like the little Dutch boy with his finger in the dyke: every time they plug one hole, a couple more spring open.
For any of us following the state of the Church, or with experience working in the Church, this is all too familiar and, unfortunately, it does appear to be universal.
The thing bishops conferences fear the most is faithful Catholics, especially educated faithful Catholics who might question their decisions. This culture of suspicion and fear has been developing over the last few decades and it is something I have experienced first hand. And it shouldn't be like that. We should all be on the same side.
We're not though are we, and Michael's expose above demonstrates that beautifully. I can back it up with some evidence from this side of the pond that shows that rather than engage faithful Catholics, bishops continually back spurious causes and questionable leaders that end up diluting the mission and purpose of the Church's charitable activities. The largest UK organisation is CAFOD which had an income of £45 million in 20/21. CAFOD's director is a lady called Christine Allen. Christine is not a Catholic and, as I have posted before, has previously expressed opinions which are in direct opposition to Catholic teaching. For example, in 2002, Progressio, the charity Allen led at the time, endorsed the use of condoms in HIV prevention. Four years later, in an article for Chartist magazine, Allen criticised Catholic teaching on contraception, which she said “simply doesn’t stack up when it comes to HIV”. The contest between supporters and opponents of Church teaching, Allen, said, was fundamental: “The battle between these factions is about the very nature of church.”. Has she changed her mind? I would like to know, because she is the director of £45million worth of Catholics money! Do we seriously believe she is not pushing her previously articulated position through the organisation she now leads?
Another example? How about the Edinburgh Jesuit Centre. They have a series of talks planned over the next few weeks featuring prominent Catholics who have positions which challenge Catholic teaching: 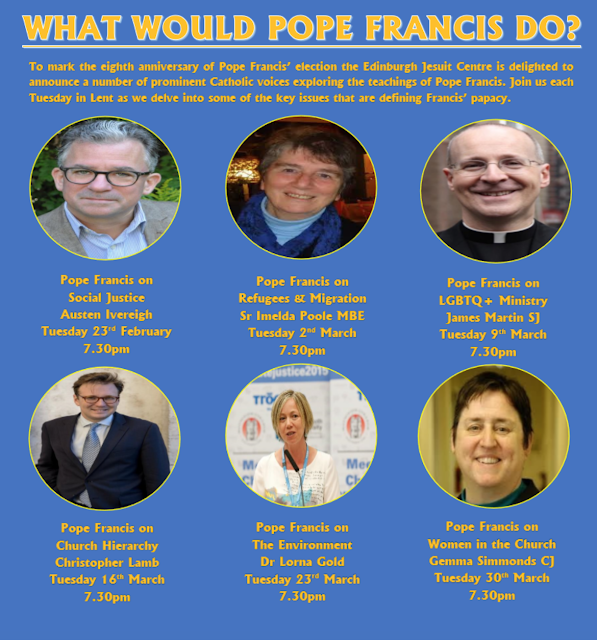 In a strange re-writing of the Protestant maxim "what would Jesus do" which seems to have a clear and obvious direction of travel. Selecting a range of progressive topics, the talks ask "what would Pope Francis do". This is a microcosm for this papacy (and you could extrapolate, for the whole of the history of the Church since the Second Vatican Council). Not what Pope Francis says (although that's problematic enough) these jokers are going to tell you what they think he would say. Do we think for a second the speakers are going to go with the Magisterium or with radical progressive positions which contradict Church teaching?
So why do you think this is happening? Who put this together do you think? It doesn't take much imagination to guess that they have personal struggles and sympathies with certain agendas.
About five years ago, I was offered a position as senior commercial manager at Westminster Cathedral. The position was withdrawn a couple of days before I was due to start because someone had found an internet comment I had made criticising Cardinal Nichol's decision to hold "gay masses" at Soho. Apparently, the cardinal was personally involved. I'm honoured!
A priest commented to me that the problem with my appointment was that I was a committed Catholic. "If you were Hindu or Buddhist no one would bother you but if you are a Catholic you might spill the beans on what really goes on behind the scenes".
One can only imagine what really goes on behind the scenes, but given reports like this one, it doesn't take much imagination to guess. It certainly makes clear the kind of individual the bishops prefer to empoy.
CCRS financial scandal Lepanto Institute Michael Hichborn