The beatings may well continue until morale improves... 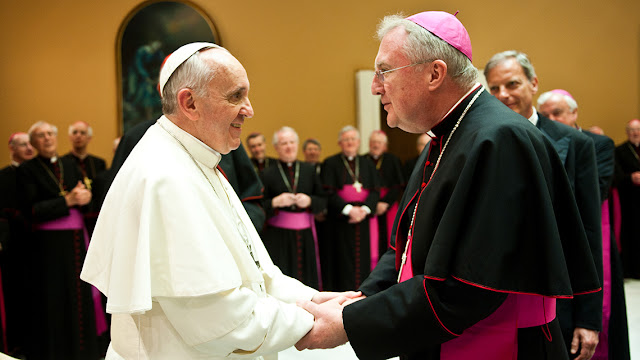 Messa in Latino, the Italian blog that first heard about the possibility of Traditiones Custodes, has published possible news of further restrictions which will potentially bind the hands of bishops in the way they treat those who attend the Traditional Latin Mass.

Despite being identified as the cause for the clamp down by Pope Francis, so far, the vast majority of bishops have responded to the Motu Proprio by maintaining the status quo, basically ignoring some of the more confusing elements of the document (like the ban on saying Mass in parochial Churches (art. 3 §3). It seems, if this report is correct, that the Holy Father is so determined to squash the Traditional Latin Mass that he is going to back up the Motu Proprio with an even more draconian "implementation" document.

Here's a rough translation of the blog:

We have received confirmation NOW of a news received a few days ago, that on 22 July the Congregation for the Doctrine of the Faith sent a short letter (dated 22.7.21 without registration number) to traditional rite institutes and monasteries in which communicates:

It seems that in the days preceding the 22nd it was also communicated to the officials "ex Ecclesia Dei" (for some years Section Four of the CdF) that, except for the office manager, they will be made redundant and will have to look for other jobs.

We will see the traditional institutes run by Braz de Aviz and, for the liturgy, by Roche.

For the Coetus and the faithful it is no longer known to whom they will be able to turn, if not to individual bishops.

The rumor is also circulating that after the summer an application document of TC will be released, by Divine Worship and Institutes of Consecrated Life, which will be even more restrictive.

"an application document of TC will be released, by Divine Worship and Institutes of Consecrated Life, which will be even more restrictive."

According to Italian Journalist Luisella Scrosati,  Roche is an admirer of Piero Marini, former master of pontifical liturgical celebrations (not to be confused with the present incumbent, Guido Marini). Piero Marini, who I've often heard light heartedly referred to as "the wrong Marini", was a secretary of Bishop Annibale Bugnini, the main architect of the post-conciliar liturgical reform.
When Roche was appointed, CNA Europe editor Luke Coppen wrote that Roche’s appointment demonstrated the level of influence that was enjoyed by Cardinal O’Connor, who was one of the group of clerics dubbed the “St. Gallen mafia,” a group that wished to radically change the Church and make it “much more modern.”
Back in 2014, I wrote this blog which extensively quoted Roche in a positive way with respect to the Traditional Latin Mass.
Back then, speaking of the Latin Mass, the Archbishop said that it “will always be a part of the Roman rite” because it maintains “the language in which the Roman rite is written - whether it be the ordinary or indeed the extraordinary form.”

“It is the way in which the Church expresses itself,” he explained, observing how there has been an increase in use of Gregorian chant during Mass, “especially at international events.”

Particular law remaining in force, the use of the Latin language is to be preserved in the Latin rites.

Clearly you can't 'preserve' a thing by abolishing it. If you want to be faithful to the Council surely you'd want to retain Latin?
With Arthur Roche, perhaps the key to understanding him is that he will tow the party lie and do exactly what he is told even though his secretary and under-sec are ideological anti-trads.
Archbishop Arthur Roche Messa in Latino Traditiones custodes