Liverpool — Is it Run By A Dim Dominican?

Further to my recent blog about Malcolm McMahon OP, the Archbishop of dying Liverpool Archdiocese who wrote a letter mis-defining Tradition as something handed down from the Pope, a reader directed me to a letter McMahon wrote to priests which was printed in the Metropolitan Cathedral Newsletter. I have reproduced the pertinent section for readers here: 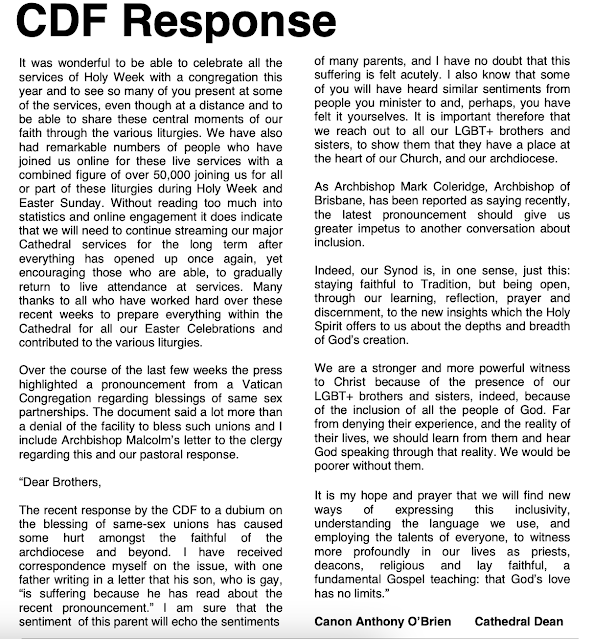 Perhaps these two priests need to be reminded that the principal end of sexual intercourse is the procreation of children, and so the pleasure of the couple or the satisfaction of desire is only right if it is in the context of a union that can take care of the new life. This means that the man and woman have to love each other in so committed a way that they are willing to bear children to each other. To deal with sexual intercourse in any less careful way is a grave sin.

It is absolutely true that all are welcome in the Church and we must welcome and accompany people regardless of sexual orientation or preferences, but to affirm a sinful lifestyle is deeply problematic and in no way pastoral — quite the opposite! The CDF response was that relationships between two homosexual people could not be blessed.

There is no doubt that this issue is probably the biggest fight we are going to have in the Church now and in the future, perhaps along with contraception. Among Catholics under the age of 30, 85% say homosexuality should be accepted. If you look at every Catholic age group the figures are that about 70% say homosexuality should be accepted. So I have no doubt that we’re going to keep hearing these things, but part of the reason why is that the Church's arguments — which are Jesus' arguments — are not presented. Rather they are confused and obfuscated, just as Canon O'Brien and Archbishop McMahon do in this newsletter. As a parent teaching Catholic truth to my children it makes my blood boil. Are they heretics or just in need of a remedial course in the catechism?

Yes there was disappointment about the CDF ruling. Especially because Pope Francis' attempts at a more pastoral approach to same-sex attraction has led to ambiguity and resulted in LGBTQ+ advocates thinking that the Pope is pro-homosexuality. They were not happy when the CDF ruling came out, and, even today, the Pope repeated the Catholic position on this issue:

Returning from Slovakia, on homosexual marriage, Pope Francis says: "The Lord is good, he desires the salvation of all, but please don't make the Church deny its truth. Many people with a homosexual orientation approach penance, but the sacrament of marriage is something else" pic.twitter.com/R5D1tEcnTd

The reason the pro-LGBTQ+ lobby are upset by this and the CDF response (and one has to wonder to what extent this applies to the Dean of Liverpool Cathedral and Archbishop McMahon) is because they're not interested in a more pastoral approach to this issue. What they want is the Catholic Church to stop being Catholic, to stop teaching the deposit of faith that was handed on by Jesus and the apostles 2000 years ago, that’s what they want and so we have to meet that head-on.

Saint Paul says in Ephesians 4:15, to speak the truth in love. Some may be offended by that truth especially if it contradicts a personal choice they have made or wish to make. It is important that we understand that we do not want them to be offended by us, our character, our vocabulary, the tone that we use; if they’re going to be offended we want the truth to be that which offends them, in order that then hopefully ultimately convicts them and brings them to repentance and the joy of the gospel.

The failure of Churchmen to address this truth is a grave sin. Archbishop McMahon and Canon Anthony O'Brien are not saying here that Church teaching needs to change to accommodate homosexuality. It's worse than that because what they're saying is that it doesn't need to change one bit. Instead, they propose Church teaching is just ignored by introducing practices which don't SAY they are flouting Church teaching but which, first by an appeal to "spirit-led" generosity, then by a shift to ambiguity will culminate in precedents which will lead to de facto changes in Church practice which in turn will effectively change the de jure teaching of the Church without (in the first years in any case) even contesting that teaching particularly virulently.
Those who stand up and remonstrate that this is incoherent practice will be told that they are not listening to the Spirit and that they are hidebound, rigid and, clearly, with some (psycho-sexual) problem of their own to hide. It's pure gaslighting and it is evil. But it's smoke and I don't know how to pin smoke down.
Archbishop Malcolm McMahon Archdiocese of Liverpool Canon Anthony O'Brien homosexual agenda