In the Archdiocese of Liverpool, only 10% of baptised Catholics, or just 55,000, now attend weekly Sunday Mass & they are mostly over 55 years of age.The problems of vocations to the priesthood & religious are a reflection of what's happening with the laity.

If you want to know why things are so bad, you could look back to the genesis of the decline which began with Archbishop Worlock's episcopate. From 1976-96 the rate of practise fell from 45% to 19% such an epic slump that it even made the BBC news. With his successor, Kelly, it fell further from 19% to 9.5%.
Archbishop McMahon appears to completely signed up to the agenda which has wrought so much damage in his Archdiocese promoting a wacky synod which discussed topics like the ordination of women as I reported here.
It makes no sense whatsoever to me to facilitate a discussion which seeks to further the cause of an issue which has no future. The time would be much better spent teaching why the Church will not move forward on this issue.
Archbishop McMahon recently Spoke at The Tablet discussion, A synodal Church: what does it mean? where he backed the synodal path for the Church and suggested that without it, the Church was facing “a very diminished, narrow future”.
The Synodal Path has been tried and tested, most especially by the Anglican Church. According to Anglican Blogger Archbishop Cranmer, (and the 2015 British Election Study) there is no decline in the Catholic Church in this country, numbers are steady largely due to immigration, whereas Anglicanism will soon be obsolete unless there are some rapid changes. See here.
Quoted in The Tablet, Archbishop McMahon said:

“I would not like anyone to think that their opinion or a particular movement within the Church is being pushed to one side. I do think that nothing now is off the table.”

Asked about the lessons learned from the process in Liverpool, Archbishop McMahon said the first lesson was to avoid thinking that the Holy Spirit is a tap that can be turned on and off, or to be found only in documents and legislation.

“The Holy Spirit lives within the community and we have to find a way of receiving and understanding the Spirit.”

Sounds suspiciously like the Archbishop is saying that the un-discipled, un-catechised, sacramentalised laity are the mouth piece of the Holy Spirit and to discern what He wants we need only listen to them. This is patent nonsense and can only lead to an erosion of Church teaching & therefore relevance.
The second lesson to learn is how to listen. “That doesn't just mean listening to the Spirit within us in our moments of quiet, but listening to each other. That’s very hard to do. We all have got something very important to say, and very often it’s a case of who shouts the loudest is heard. We had to get help from various people to help us learn to listen.”

Archbishop McMahon recently issued instructions on the Pope's Motu Proprio Traditionis Custodes which many saw as harsh and lacking pastoral care. Not a lot of listening evident there. He has now followed up with this strange half-finished essay: 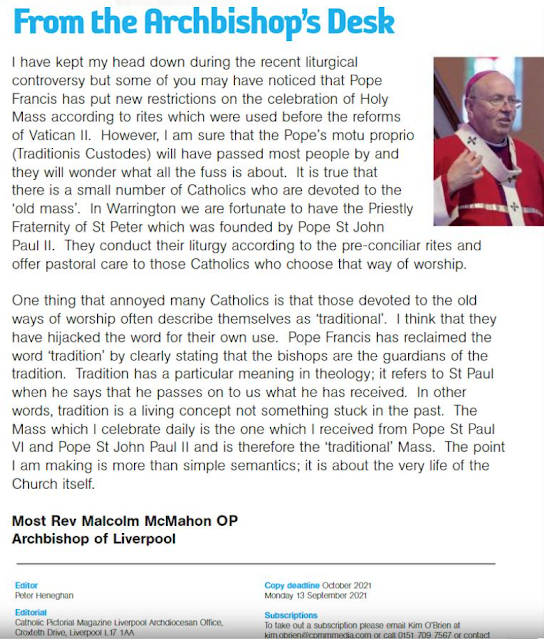 Obviously this delivers a severe kicking to the FSSP who must be reeling about now. Frankly the way he speaks about Catholics who "choose that way of worship" is extremely rude and patronising, but it does give us some insight into his mindset. And he is speaking to a diocese which has broadly apostatised in a spectacular way over the last forty years or so. It seems this has effected him quite a lot, in fact, one might say, to the extent where he seems to have completely lost any idea of what he should actually be doing: evangelising the culture.
The Archbishop misrepresents tradition here. Christians believe that the teachings of Jesus and the Apostles were preserved in the scriptures as well as by word of mouth and were handed on. This perpetual handing on of the tradition is called the "Living Tradition"; it is believed to be the faithful and constant transmission of the teachings of the Apostles from one generation to the next. That "includes everything which contributes towards the sanctity of life and increase in faith of the People of God; and so the Church, in her teaching, life and worship [the Creeds, the Sacraments, the Magisterium, and the Holy Sacrifice of the Mass], perpetuates and hands on to all generations all that she herself is, all that she believes." (Dei verbum)
His strange bit about the "traditional" Mass being the Mass of Pope Paul VI seems to play directly to the hermeneutic of rupture and suggests that Vatican II broke with the faith which went before. No better evidence that these men are stuck in the Seventies.
Archbishop Malcolm McMahon Archdiocese of Liverpool Traditiones custodes