The Archbishop of Liverpool, Malcolm McMahon (aged 72) has long been touted in some circles as a Traditionalist.

This may be because he invited the FSSP (Priestly Fraternity of St. Peter see here) to Warrington and had carried out ordinations in the Traditional Rite.

It may be because he likes dressing up in the clobber:

Whatever the reason, I have been very suspicious. He has always struck me as wonky. He has made some very peculiar comments about education, stating that he wants "age-appropriate sex education in all our schools" & said pregnant, unmarried teachers would be "exciting for the children". This is in direct contradiction to Vatican guidelines The Truth & Meaning of Human Sexuality which plainly teaches that it is wrong to intrude on children's natural innocence, and that sex education should not be introduced at primary school level. McMahon was the instigator, gate keeper and later the defender of LGBT infiltration of the Catholic Education Service when they used documents directly copied from LGBT propaganda organisations to publish spurious guidelines on "biphobic bullying". He serves as Chair of the Department of Education and Formation of the Catholic Bishops' Conference of England and Wales, Chair of the Catholic Education Service

He was also notoriously unhelpful when Alder Hey hospital sought to over ride the wishes of Alfie Evans parents and kill him.

The Archdiocese of Liverpool was in a pretty sorry state when he became Archbishop. But McMahon has done nothing to halt the decline and it is difficult to see how these restrictions will do anything about the 90% lapsation rate or for the remaining 10% who do practice but are mostly over 50. The truth is that the FSSP in Warrington are an oasis in the desert that is the Archdiocese of Liverpool. Now McMahon is strangling that oasis.

McMahon has now issued an officious and cold (though, to be fair, faithful to the Pope's intended aim) instruction on the Pope's horrendous Moto proprio, Traditiones custodes. 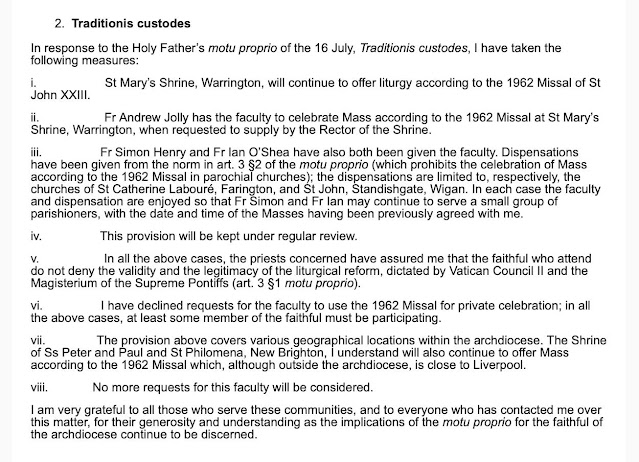 This instruction now means that only three named priests can licitly offer the old Mass publicly.

++McMahon's purported restriction on private Masses is itself illicit, since he lacks the proper authority to impose such a restriction. The actions of a self important bully.

Is this McMahon's manifesto for the Archbishopric of Westminster?

Sadly it looks like this is becoming the line for English & Welsh bishops. Many of us were pleased by the initial pastoral tone of the bishop's response, but this increasingly seem to have been merely a holding message...Now we are seeing the true modernist colours of our pastors, all eager to please Pope Francis irrespective of whether he talks sense or not. And irrespective of the damage wrought to priests and communities.

The thing is, this is only going to get worse. The letter follows the spirit of the Motu proprio and I hear this is what Arthur Roache is asking bishops to do.