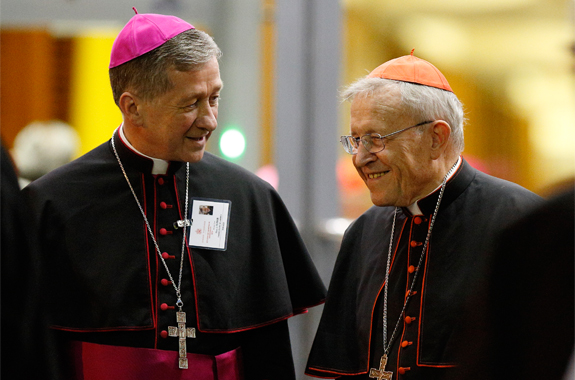 Much of the talk among friends is of why God is allowing such a withering time for faithful Catholics. Despite the fact that this is incredibly difficult for all of us, that the faith seems to be daily mocked by those who are supposed to guard, teach and defend the faith, many of us seem to have rather a clear sense that, on some level, this has to happen. The wound needs to be cleansed before it can heal. What is clear is that the scum is really floating to the top. We know who is on what side, the battle lines are drawn ever clearer between those who love the Bride of Christ and those who want to change her into something else.

Who will ever think Austen Ivereigh objective or competent after this papacy is done? How can Cardinal Joseph Tobin ever think anyone will take him seriously again after his "nighty night baby" tweet? (A quick look at Twitter these days reveals how every one of his tweets is followed by derision). Who can believe anything Archbishop Paglia says given his scandalous affirmations of homosexuality? Or notorious anti-theologian & Francis apologist Cardinal Francesco Coccopalmerio, who, it has now been revealed, was actually present at a homosexual drug-fuelled party raided by the Vatican police in the summer of 2017 at which his secretary, Monsignor Luigi Capozzi, was arrested.

Back in July 2017, I lamented the pseudo-intellectuals Pope Francis surrounds himself with as a constant embarrassment to him. I had no idea how much worse it could get so quickly. We know about ze Germans who recently seemed to be falling a bit out of love with Pope Francis, this could be because he reportedly "does not want to be the one to break the Church", which makes you think he has no problem with it breaking, he just doesn't want to be the one to do it! This does not fit with ze German plan, which is to retain as much Church tax as possible so that they can continue living in their nice palaces!
Of course, the Pope's love of ze Germans, especially Cardinal Kasper, seems wildly at odds with the Pope's love of simplicity and the poor, Cardinal Marx was roundly criticised after he spent around $11 million renovating the archbishop’s residence and another $13 million for a guesthouse in Rome, this at the same time as the Vatican suspended Franz-Peter Tebartz-van Elst in 2013 over his alleged lavish spending.

But it doesn't end there. Now we have an Archbishop who doesn't have -- or want -- Christ as his King: 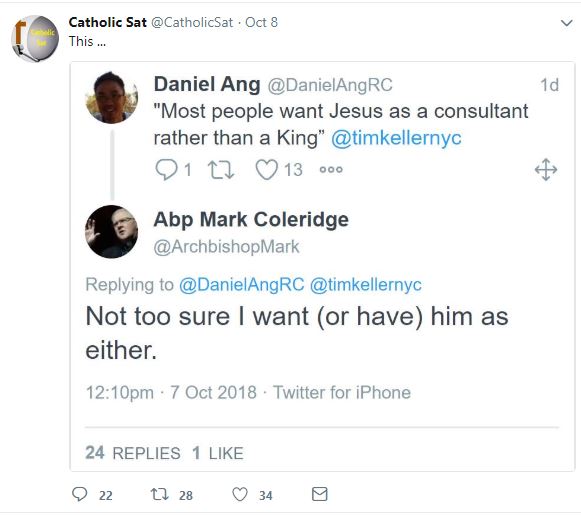 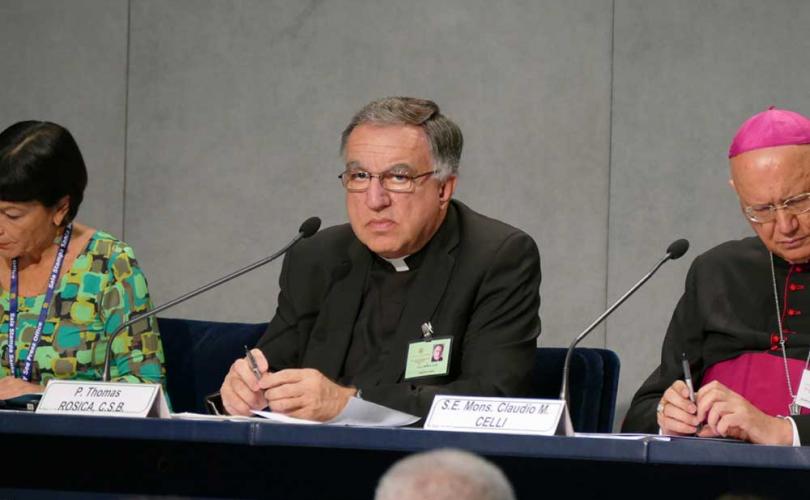 Rosica is the Vatican spokesman & CEO of Canadian Salt & Light TV, who seems unable to avoid embroiling himself in what can best be described as embarrassing polemics. He infamously made a legal threat against a small part-time blogger who wants to defend Church teaching. He has a long record of dodgy pronouncements and quasi-theology (for another example see here and here).

As LifesiteNews recently reported, Rosica also is notorious for his pro-homosexual views.

He defends LGBT activist Fr. James Martin, rejects the Catechism’s description of the homosexual inclination as “objectively disordered,” and says the phrase “intrinsically disordered” is “harsh.” Rosica was a longtime admirer of the late Gregory Baum, a homosexual dissident former priest whom he interviewed on Salt and Light in 2012.

More recently, Rosica was scheduled to say Mass for the pro-LGBT All Inclusive Ministries in Toronto but cancelled after news of the event was widely published (so a heretic and a coward). Rosica has preached a “mission” at the LGBT-friendly parish Most Holy Redeemer in San Francisco.

Such proclivities are particularly significant at a synod that many observers fear will be used to push for a change in Catholic teaching on homosexuality.

Those fears appeared justified when the synod working document released in June included the term “LGBT,” which had never before appeared in a Vatican text.

Top synod organizer Cardinal Lorenzo Baldisseri said youth used the term in pre-synodal documents, but when LifeSiteNews debunked that claim, he said the acronym would remain despite the fact he lied.

Cupich was the choice of Pope Francis to succeed Francis Cardinal George as Archbishop of Chicago on September 20, 2014. Needless to say he is a big backer of everything FrancisChurch.

Cupich has been notorious for years; this video from 2015:


He's at the Synod of course, he wants to spend more time with children apparently:


A month or so ago he was telling us how we need to pray for saints: 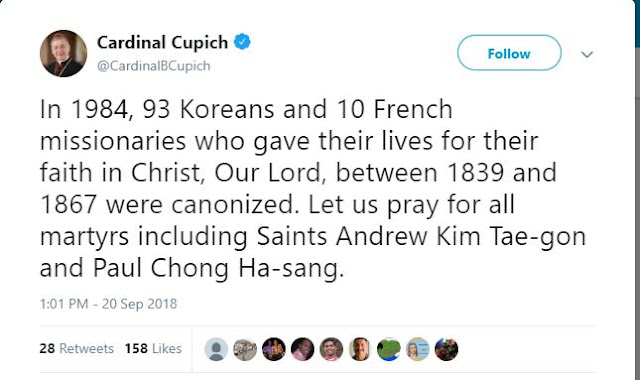 And just a couple of days ago he was on TV saying that, in direct contradiction to Bishop Paprocki it is not his policy to deny communion to gay "married" couples.


Just how are the faithful supposed to respond when unity if one of the sacred marks of the Church? Why is Pope Francis so fond of James Martin, Thomas Rosica, Joe Tobin and Blase Cupich? What has Cupich done to warrant his elevation to such high office when, given his tweet about saints (above) he doesn't even seem to understand the most basic truths of the faith? Can we have confidence in such a man's governance?

Canon Lawyer, Ed Peters explains just how at odds with the Catholic faith Cupich is in this most recent statement:


It needs no long blog post from a canon lawyer to explain how wrong would be a failure by a bishop to protect his faithful against scandal (CCC 2284, 2287) and/or to defend the Eucharist against potential sacrilege (CCC 2120) but, make no mistake, in reiterating that “it is not [his] policy” to withhold holy Communion from persons in ‘same-sex marriages’, that is what Cdl. Cupich’s refusal to act as ‘the guardian of the entire liturgical life in the church entrusted to him’ (c. 835 § 1) and “to exercise vigilance so that abuses do not creep into ecclesiastical discipline, especially regarding … the celebration of the sacraments and sacramentals, [and] the worship of God” (c. 392 § 2) in this matter, does.

Cupich’s failure ‘to bishop’ in this regard, of course, effectively abandons his pastors and other ministers of holy Communion to face alone the anger of some Catholics in ‘same-sex marriages’ who (like persons in merely civil marriages following divorce) must nevertheless be refused holy Communion by pastors correctly recognizing that, no matter what their archbishop doesn’t say, they are still required by canon law not to admit to holy Communion those who ‘obstinately persevere in manifest grave sin’ (c. 915).
Canon 915, as has been explained many, many times, rests on ancient, indeed Biblical, foundations, nothing in modern canon law or recent magisterial literature annuls it, and it unquestionably applies in regard to Catholics who have attempted a ‘same-sex marriage’. But it might still be useful to explicitate briefly the application of Canon 915 in some same-sex pastoral situations.
1. A homosexual inclination or orientation does not, in anyone’s opinion, disqualify a person from being admitted to holy Communion.
2. Cohabitation by homosexuals does not, in my opinion, disqualify them from being admitted to holy Communion because one does not assume that persons of the same sex are engaged in sexual activity (and in this respect, yes, homosexual cohabitation differs from heterosexual, or has differed, according to about 5,000 years of recorded human behavior).
3. Attempted civil marriage between persons of the same sex (just like those following divorce between heterosexuals) disqualifies, in the common and constant opinion of learned persons (which I share), such Catholics from being admitted to holy Communion because the sign-values that marriage (c. 1055) enjoys in the Church and civil society—itself a public sign proclaimed, by the way, irrespective of whatever private sexual activity might or might not be occurring between the persons involved—are contradicted by persons purporting to be in a ‘marriage’ that cannot be a marriage.
The above analysis applies, I suggest, even if it is not promoted by local Church authorities.

It seems to me, rather than elevating and lauding Cupich, Pope Francis should be censoring him?