Cardinal Sarah: “The Church is dying because the shepherds are afraid of speaking with truth & clarity,” 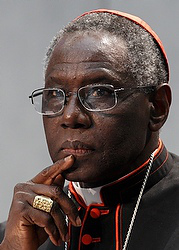 “The Church is dying because the shepherds are afraid of speaking with truth and clarity,” he adds, “We are afraid of the media.” As a consequence, Catholics are “confused”.

For Sarah the Church has become a “den of darkness” and a “cave of thieves”. Certain men of God have turned into “agents of the Evil one.” And, “...have betrayed like Judas.” Sarah calls relativism “the mask of Judas, dressed as an intellectual.”

“We tolerate everything” and “Catholic doctrine is put in question,” Cardinal Sarah says,

“In the name of stances which they call ‘intellectual’, theologians delight in deconstructing the dogmas and emptying Catholic morals of their profound significance.” Gloria tv reports.

It is difficult to argue against the Cardinal's hypothesis which suggests that, at the root of the collapse of the West, there is a crisis of identity and culture. The West no longer knows who it is, because it does not know and does not want to know who shaped it, who constituted it, who bestowed it with such dignity and civility. Many countries today do not know their history. This auto-asphyxia leads inevitably to a decadence that opens the way to new barbaric civilisations. Everything is tolerated in our society but nothing is forgiven. We seem locked in a race to produce new levels of barbarism in the name of entertainment. With each new season we see more graphic sexuality, new boundaries broken in terms of coarse language and behaviour on public display.

The relativism Cardinal Sarah refers to is so evident today in societies which deny objective truth and therefore any real ideal or over-arching moral consensus. Our politicians speak about freedom of religion and freedom of belief they seem to just be trying to appeal to as many people as possible. The political vision of a pluralistic, tolerant society contains irreconcilable paradigms. Society is built on consensus and consensus is sought by leaders with vision. Increasingly we see leaders emerging with the opposite traits: they seek to please the mob, and often, they seek to appeal to conflicting demographics (a prime example would be Islam and the LGBT movement). Our society seeks to appease all members but what does it do when two groups have conflicting opinions? As already stated, the precedent seems to dictate it capitulates to the most outrageous or progressive moral position with no regard for "outdated" "old fashioned" (some might say tried and tested) morality. What can go wrong???

The problem is, without agreed moral norms in society, we can only expect fracture. What do parents do if it becomes clear that their children will be taught norms which contradict their own moral position at schools? They remove them of course and stop participating in the society.

The Church has long provided the bulwark to all this darkness pushing in on society. It's defence relies on intelligent, courageous and articulate leaders with sound, logical, reasoned arguments speaking out boldly. But it seems no more. In the name of tolerance, all but a few of our priests embrace the darkness in the name of a false tolerance like it was a new Gospel.

All of society will suffer as a result of this abdication of duty spearheaded by prelates like Archbishop Scicluna, Cardinal Marx and Cardinal Nichols, but Catholics will be the first to suffer and will suffer most egregiously because Catholic families stand in the front line.

As Cardinal Sarah so accurately puts it:

“The Church is dying because the shepherds are afraid of speaking with truth and clarity,”
“We are afraid of the media.” As a consequence, Catholics are “confused”. 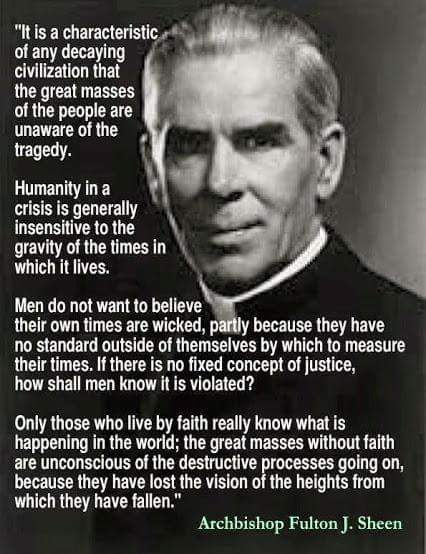