"The most terrifying words in 21st-century Catholicism are “I’m from the German Church and I’m here to enter into a synodal dialogue about new doctrinal insights.”" ~ Dan Hitchens

It's true for GK Chesterton as always, when he stated:


“The Christian ideal has not been tried and found wanting. It has been found difficult; and left untried.”

What better example could there be than the opulent, bloated German Church? 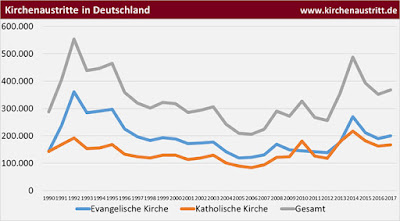 These men have been pushing a particular agenda their whole lives. It consistently leaves people cold, disinterested & apathetic. It has destroyed vocations and wrecked Mass attendance. They so lack insight, intelligence & self-awareness that the only reason they can see for this is that they have not gone far enough!

Of course it could be argued that analysing "people leaving the Church"-- ‘Kirchenaustritt’ doesn’t really mean much other than that people don’t want to pay the Church tax. Many have already long gone from the Church but still pay it - others still go but don’t want to pay it. Because of this fact it is difficult to definitively say what the figures actually demonstrate except that it is certainly true that more leave each time there’s a new scandal.

Now, supposedly in an effort to address some of these factors, the German bishops have decided on what on face value appears to be a complete rejection of Catholic wisdom, and an embracing of the secular zeitgeist. Cardinal Reinhard Marx of Munich and Freising has announced that the Catholic Church in Germany is embarking on a “binding synodal process” to tackle what he says are the three key issues arising from the clerical abuse crisis: priestly celibacy, the Church’s teaching on sexual morality, and a reduction of clerical power. Of course, there's no such thing as a "binding synod", but when has Marx ever let things like facts or protocol stand in the way of his implementation of #NuKirche?

Speaking at the conclusion of the plenary session of the German bishops’ conference on Thursday, Marx told reporters that the bishops had unanimously decided these three topics would be subject to a process of “synodal progression” that could lead to a binding, but as yet undetermined, outcome. Let's call it formal schism?

Remember this? And this?

The German bishops held their plenary session in the German town of Lingen from March 11 to 14.

Addressing journalists on the final day, Marx said the Church’s teaching on sexual morality has yet to account for significant recent discoveries from theology and the humanities. Also, he said, the significance of sexuality to personhood has not yet received sufficient attention from the Church.

Bishops “feel we often are unable to speak on questions of present-day sexual behavior,” Marx said.

The cardinal also said that the German bishops appreciate priestly celibacy as an “expression of the religious bond to God” and do not simply want to give up on it. But to what extent celibacy should always be an element of priestly witness is a question “we will determine” through the “synodal process,” Marx told the press.

This sort of thing has precedent, even if those involved in the Robber Synod of  Pistoia would never have been able to conceive of the sexual focus and direction of the German Church.

Clearly Marx and ze Germanz are using their money to blackmail the Church into changing teaching that can never be changed. The real question for me is why? It's demonstrably not working and what will he gain from it? Any fundamental understanding of history and culture shows that Catholicism cannot succeed in seeking accommodation with the prevailing secular culture. We cannot conform to it's fundamental subjective premises & still preach an objective truth. It may win a short stay of execution to follow this path, but it cannot achieve anything other than a further erosion of the power & relevance of Catholic thinking and the Gospel message. Marx & co are waving the white flag of surrender and basically saying the Church got it wrong and secular culture got it right.

Why would anyone be interested in anything the Church has to say after such a capitulation? More importantly in a way, what does this actually say about the faith of the men leading the German Church?

It seems to me the German bishops really believe that this direction forms a plan they think will work, despite the consistent evidence that contradicts that. Yes, people are leaving the Church - and the bishops (not just German bishops either) seem to think this is because the Church has become less relevant so they move to change it to make it relevant. They fail to understand that it is the counter cultural message of the Gospel that makes the Church relevant not the social work they are all so preoccupied with! The Church has become less relevant precisely because it has stopped challenging the secular agenda!

The gloomiest thing about this is I think Marx & co will succeed; they have the backing of the Pope (as I demonstrated here and here) and even the Benedictine nuns in Germany are in on the agenda.

Of course, if things continue at current rates, there will be no priests ministering to no people, so don't worry too much!