The Destination of "Synodality" - Lessons from Norway 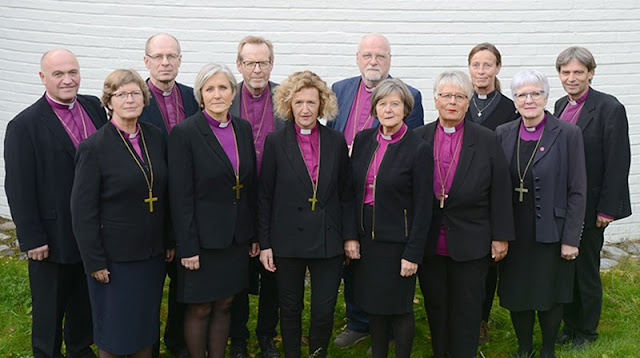 One of the clear directions of this Pontificate is "synodality", purportedly devolving more power to individual jurisdictions (see here for example).

This has long been code for a Church which changes its' teaching to fit in with a more modern secular perspective.


“The ‘sensus fidei’ (sense of faith) makes it impossible to rigidly separate the ‘ecclesia docens’ (teaching church) and the ‘ecclesia discens’ (learning church) because even the flock has a ‘nose’ for discerning the new paths that the Lord is opening up to the church,” the pope said.

Of course, to be Catholic is to understand that Revelation finished with the death of the last Apostle. Nothing "new" can be revealed. The Church does develop "new" ways of explaining the deposit of faith (fides quae creditur). The Church does not reveal God's will, that was what Jesus did. Rather She is a custodian of the great treasure of faith; the Revelation of God made in the Person of Jesus Christ.
When I read the Pope's Encyclical Laudato Si one of the things that struck me most was the fact that a different bishop's conference was credited on virtually every page of the document. I wondered if the Pope was trying to show how wise the bishop's conferences of the world are? Softening us up for a move towards Synodality?
Personally I have no doubt that "synodality" simply means ze Germanz will be able to bring in gay stuff and abortion stuff and communion of divorced people and all manner of nonsense without the Pope feeling too compromised. What else could be the purpose? What can it serve to achieve except the erosion of our common profession of faith?
It's not new or innovative, the Church of England have been at it since the English church renounced papal authority when Henry VIII failed to secure an annulment of his marriage to Catherine of Aragon in 1534. Where has it led them? Further and further away from Christ. Closer and closer to irrelevance and ignominy.


Another example is the Lutheran Church in Norway. On the 15th Feb this Norwegian "Church" released an unbelievable statement on abortion stating that


”a society with legal access to abortion is a better society than a society without such access. It prevents illegal abortions and promotes women's health, safety and security.”

Can you call yourself "Christian" and support a violation of the 5th Commandment?

Is this where we are headed?

Read this in the paper this morning. I wonder if there is any correlation? How many “legal” abortions did Norway perform last year? Were the number of abortions greater than the 55,120 children that were born? I think I see the problem.🤔 pic.twitter.com/ZY5Em56q2U