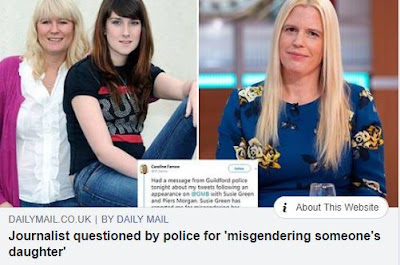 I thank God for brave Catholics like Caroline Farrow who are willing to put their own well-being at risk in pushing back against the false and dangerous ideologies which are being foisted on our children presently. This situation is particularly pernicious - the woman who reported Caroline has received half-a-million in sterling from the government to promote her false ideology. Indeed the whole country seems to have gone transgender crazy over the last couple of years, the number of children being referred to gender identity clinics has quadrupled in the past five years. Some sources quote a 4,000% rise in children with gender dysphoria in the US.

But where are our bishops in this argument? Well they don't say much at all, as Cardinal Sarah says in his new book, they are terrified of upsetting the media, but they have promulgated deeply problematic & heretical guidelines for our schools on so-called LGBT issues, and drew dismay when they tweeted in support of "Transgender Day".

About this time last year I reported that Cardinal Nichols had made some apposite remarks to school leaders about transgender issues. The comments were nowhere to be found on any official Catholic channels and it seemed that they had almost been hidden away.

How much better would it be if our bishops were engaged in the culture war that is raging all around us. Their silence is frankly deafening and only serves to breed confusion and apathy among the lay faithful who have developed a wide range of problematic opinions formed in the vacuum created by a lack of any proper teaching.

It seems to me that, for better or for worse, this is what the bishop's role is; to hold the line, to explain why Catholic truth, unpopular as it may be in the culture of death, is the best way to live your life.

Just as our diocesan development plan is a failure to show any sort of insight into the real nature of the challenges we face, so the bishop's failure to speak out with authority on the pressing issues of the day is resulting in a mass apostasy.

We need the intellectual elite of our faith to develop a strategy which provides a sound reason for us to believe in the teaching. We then need a strategy to get the message out to the faithful.

Meanwhile, as the bishops cower inside their ivory towers, brave Catholics like Caroline will have to go on defending Christ & His Bride.

How many steps are we away from penal times? Not many it seems to me, with Catholic journalists like Caroline being interviewed by police for stating facts.

A Catholic spokesman in Scotland has warned that expressing Catholic beliefs on sexuality could soon become a "hate crime".


“In a climate of heightened sensitivity there is a very real danger that expressing or even holding individual or collective opinions or beliefs will become a hate crime,”


“We must guard against this and ensure freedom of expression, thought, conscience and religion are protected.
“Some people might suggest that expressing the Catholic Church’s position on marriage or human sexuality could be an attempt to stir up hatred.
“This would obviously be wrong, but without room for robust debate and exchange of views we risk becoming an intolerant, illiberal society.”

Today we enjoy so many benefits, freedoms and privileges which were hard one over long periods by our fore-bearers. We are on the cusp of losing these freedoms and it seems like we are all asleep, none more so than the shepherds who are commissioned with guiding us safely through the tumultuous seas of modern culture. They acquiesce and procrastinate, giving tacit approval to poisonous ideologies and failing to stand against a creeping culture of death, fiddling while all around them Western society and culture burns. 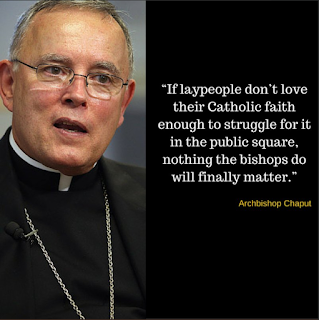 We need to stand up and have these arguments, we who live the Catholic faith and recognise its' beauty and power in our every day lives. A beauty and power of such importance that its' ideals have created Western civilisation, and given us equality, democracy, a legal system, hospitals, schools, etc, etc. Now this very structure stands at stake.

Take God away, the human person is merely another animal without a transcendent dimension or destiny. Without God, human life is not a great gift with inherent meaning and purpose but a thing to be used. Atheism undermines knowledge of the true nature of the human person:

Having lost the knowledge that humans are the image of God, the culture of death reduces the value of the human person to functionality, efficiency, and usefulness, to transient human desires and the vagaries of economic productivity. In this culture, pleasure and lack of pain are the most valuable commodities, and the powerful can exploit and even kill—legally—those who are weak, poor, elderly, sick, or immature.

We, the Catholic Church, have long provided the bulwark against the culture of death which constantly threatens our society. We are standing up and will continue to, but how much stronger would we be with a strong moral lead from the bishops?