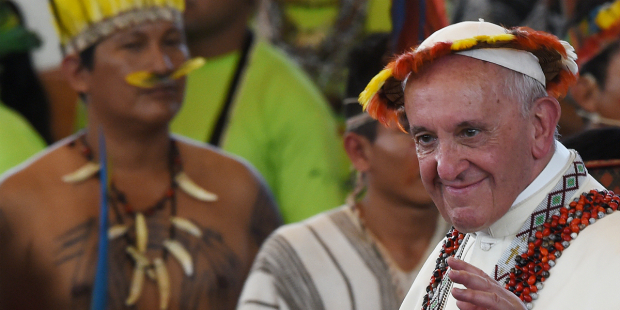 This morning I feel happier about the Church than I have done for some time. The unlikely reason is that Pope Francis has released his new Apostolic Exhortation Querida Amazonia (read the full text here) and it is good!!

1. It is short - the shortest document released by this pope at 33 pages divided into 4 chapters named after dreams; A Social Dream, A Cultural Dream, An Ecological Dream, An Ecclesial Dream.

2. Pope Francis does not mention Pachamama directly, but does further attempt to justify the awful episode in paragraph 79:

3. Despite calls from the synod fathers for women deacons, Pope Francis denounces those who push for female ordination, saying "it would lead us to "clericalize" women, diminish the great value of what they have already accomplished, and subtly make their indispensable contribution less effective."

4. Pope Francis addresses the issues of the Priesthood & the Eucharist in paragraphs 82 - 98. I can discern no opening whatsoever for the ordination of married men (often referred to as viri probati) to the Priesthood despite the fact that this was in the final document of the synod. There is an emphasis on the lay ministry as "distinctively lay" (cf. paragraph 94). The Pope rejects the ordination of married men to the Priesthood in the Amazon, saying "it is not simply a question of facilitating a greater presence of ordained ministers who can celebrate the Eucharist" 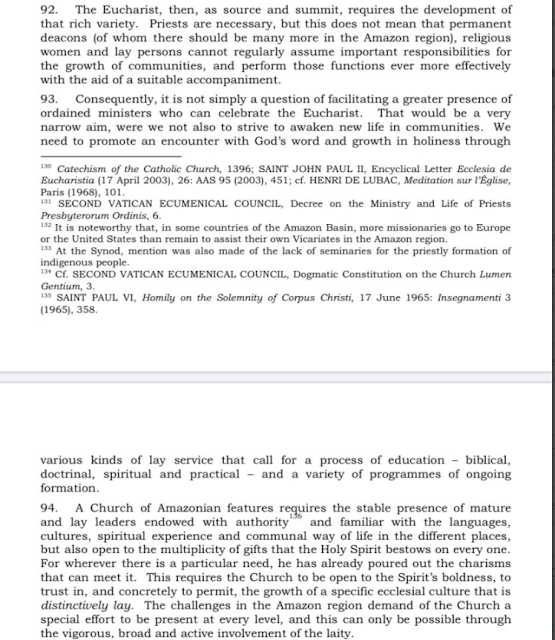 5. Pope Francis says the solution to the lack of priests in the Amazon region is to pray; "not only to promote prayer for priestly vocations, but also to be more generous in encouraging those who display a missionary vocation to opt for the Amazon" 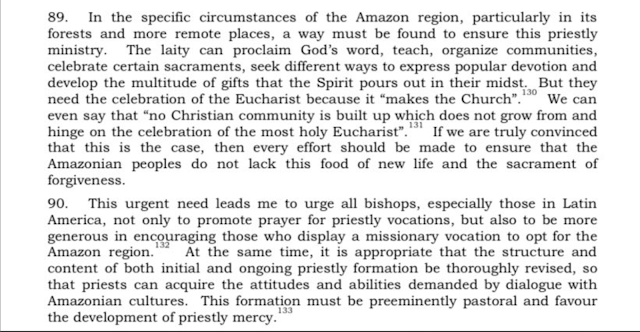 The traditional Catholic blog Rorate caeli have described it as "the best possible document we could have hoped for in the current pontificate and in the current age."

However, somewhat predictably, at a presser on the release of the exhortation Cardinal Michael Czerny, SJ (another Jesuit), appointed by Pope Francis as the Special Secretary of the Synod for the Amazon, “the Holy Father has not resolved” the question on women deacons and married priests, he said that that “they will continue to be debated, discussed, discerned, prayed over, and when mature presented to the appropriate authority for decisions.”

Czerny added that those decisions “can be made in a diocese, in a conference, and decisions that are made here (at the Vatican).”

At Presser for presentation of #QueridaAmazonia, Sandro Magister asks about the proposals of the ordination of married men to the priesthood in the Final document, @jesuitczerny responds that all the particular proposals in the Final document "remain on the table" pic.twitter.com/A0CfrsXKDv
— Catholic Sat (@CatholicSat) February 12, 2020 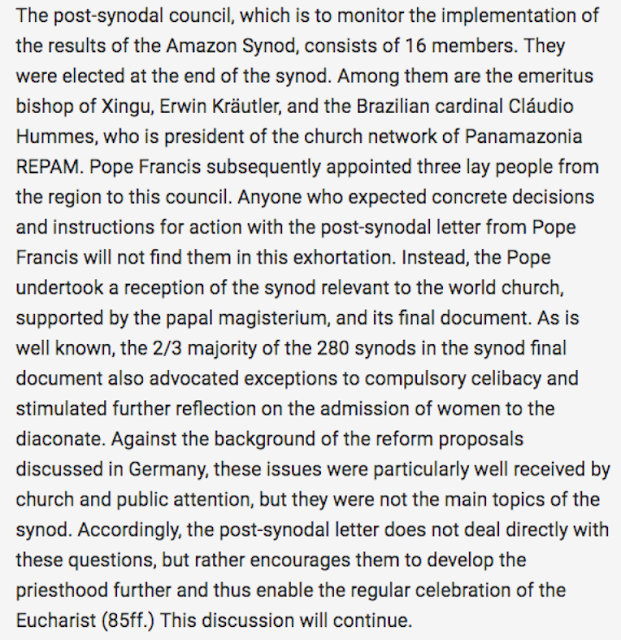 "These were not the main topics" ... "the discussion will continue". Of course, had there been a stray ambiguous footnote, the good cardinal would no doubt have been trumpeting "Roma locuta est" from the rooftops.

What this do show us is how this all works. When the pope says something you like, you affirm its authority like crazy. When he says something you don't like, you just carry on with your narrative regardless and ignore him. Of course, Pope Francis is the one who has put these people in positions of power, so is he the one driving this narrative?

Certainly the evidence is that he consistently says one thing and does another. The best example of which is probably his stance on abortion. He tells US bishops abortion IS the pre-eminent issue for Catholics, says it's like "hiring a hit man" and tells gynaecologists "Every unborn child, though unjustly condemned to be aborted, has the face of the Lord, who even before his birth, and then as soon as he was born, experienced the rejection of the world,". Then he appoints pro-abortionists to the Vatican Life Academy, honours pro-abortion politicians and consistently supports UN initiatives which include birth control & abortion.

Many people suggest this is his "make a mess" tactic - which has been described as typically Peronist: "indicate left and turn right"

Whatever the case, it leaves you wondering what on earth the synod and papal exhortation are for? What purpose do they serve??

I run a company. If I make an announcement saying we have signed a contract and are going to be focusing on a specific market, and then all my top managers come out immediately I have presented my report and say the direct opposite - I would fire them!

One can only conclude there's a game of bait & switch in play. Feed the stupid lay people what they want to hear and continue to undermine behind the scenes.

While it is true, according to the normal rules that the statements in the apostolic exhortation carry more weight than the words of a cardinal at a press conference. And it is true that the post synodal apostolic exhortation has rejected ordination of married men and women's ordination in black and white bearing Francis' signature, this tactical change of direction allows the destruction to continue without Francis becoming entrapped and defined by his own words.

What we do know is that the pope does not play by the rules.
I hope I'm wrong!